You probably haven't noticed because it hasn't been in the news much, but there's a virus going about.  I think it might be our fault because apparently we're being placed under house arrest for the spring.

"But you're on the move from Cropredy to King's Bromley" I hear you exclaim.  Well we were, and we were quite happy to be out in the sticks on the canal and probably quite safe too, but there was the question of getting back home  by public transport after we arrived at KB, and then abandoning Herbie a long way from home for some months.  So  . .

Herbie now has a temporary berth in Wigrams Turn Marina.  Lucky for us that it was on our route and a member of the Castle Marinas family along with Cropredy and Kings Bromley so it was easy to arrange and at no extra cost.  People at WT and KB have been very cooperative and helpful with our change of plan and thanks to a lift from Rick and Marilyn (to whom we always seem to owe so much, including staying at their house in Buckby over the weekend)  we were easily able to get back to our car at Cropredy.  So all is good.  At the moment we're with our son Peter in Cambridge - he can work from home - but later this week we'll be back home.  I fear our house arrest might mean I can no longer find excuses not to do all the jobs that need doing at home.  I'm thinking of renaming our house "Alcatraz" 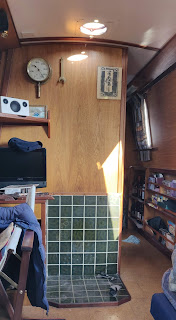 Oh here it is: 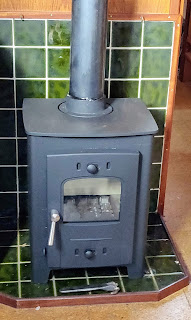 Yes we made our pre -planned stop at Midland Chandlers

where the rather excellent Colin Rowe and his mate made short work of removing the collapsing old one and installing a new one straight from the shop. I was very impressed  by watching them work - recommended for any boat work in the general area around Braunston.  For anyone interested in stoves it's a Hamlet Hardy 5 - all steel.  Colin said he's fitted quite a few of them and people are happy with them.  Much cheaper than a cast iron stove too - less than half the price.  How long it lasts, we will have to see.

And before the stove, we were in at Calcutt having an engine mount replaced and a service including replacing a number of new copper washers along the fuel path to cut out little weeps we'd been having.

Not a cheap week all in all but now Herbie is fit and ready to go - well nowhere for a bit, but it's not her fault.

Best wishes to all our senior pals out there.  Enjoy your peace and quiet in isolation and keep fit.   Although we won't be boating I'll try and think of posts to keep me amused so do drop in.

I was not aware that Midland Swindlers would actually fit the stove on the boat, thinking that they were solely traders. I bet is was a lot cheaper than Braunston Marina where my Morso was fitted - £900!! You are wise not to travel by train, but fortunate to get in at Wigrams, being part of the same marina setup. I am having work done on my bathroom for the next two weeks and am thinking of staying on board to isolate and have showers - what is your opinion - go or stay at home with two blokes working and all the din or go away?

Ray, Not fitted by Chandlers themselves but by a bloke they recommended. He is a regular customer for bits and pieces and they are happy to let him fit things using their wharf.

Going away might be safer - no knowing if one of your bathroom blokes might bring in the lurgy. For ourselves though, we are glad to be back home now even though we saw lots of people out on the canal where they are obviously safely isolated.

Thanks for the tongue-in-cheek humor. So pleased to read you and yours are doing all right. So many boating friends are watching their summer cruising plans go up in smoke...and CC live-aboards are struggling with getting groceries. A friend on a boat decided to try an Ocado delivery in Nantwich. The grocery website informed them theirs was order number 7889 in the queue and would be deliverable the end of the first week in April!

Sending you and Kath loads of love and Biggs big hugs from across the pond and the U.S. continent. Stay safe, stay well!

Thanks Jaq. Grocery delivery dates are no better on land! Luckily we stocked up with food for our cruise, so we brought it all home again when we abandoned the trip. We shan't starve yet.

Oh Neil, you and Kath too. Koos and I are also under house arrest. I don't need to be, but he does and so that makes two of us. I can work from home too and teach online, so it's not too bad in that way. I'm glad you had at least a short time out on the water, and that you are some way to your destination. May this all be over sooner than later, and stay well!