Is something actually going to get done for Slough Basin??

Well whaddaya know? It begins to look like CRT and some developers might at last actually be going to do something about the basin at the end of the Slough Arm.  A local newspaper report gives details of a £68m scheme to regenerate the area making an attractive waterfront area and building  in excess of 300 homes (mostly flats I suspect).  I dare say it would be a good long term investment for CRT. I know they've been looking at the idea for some years, so I'm happy to see that it is getting nearer to reality.  The dear old Sough Arm deserves it.

I would show you the pretty architects' picture of the proposed development but for copyright reasons I'd better direct you with this link to see for yourself.

For those of you who've never ventured down there, and I could hardly blame you, here's what it looks like currently. 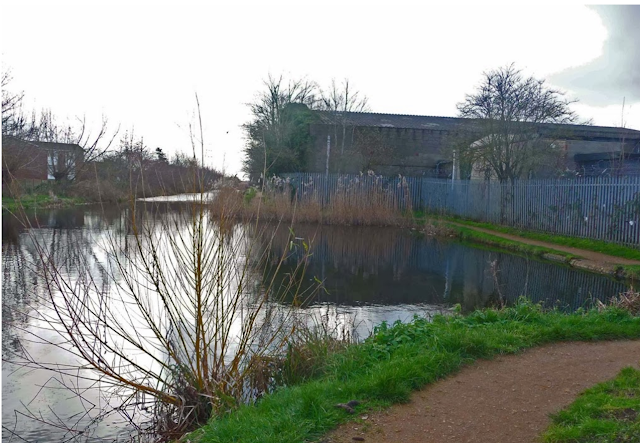 Hardly worth the trip I admit , especially in the summer when the canal is usually choked with weed.  I've often remarked that the canal doesn't properly end, it just stops.

Now the interesting question will be that if the development goes ahead, will CRT feel obliged to do more about the navigability of the arm?  They did dredge about half of it a couple of years back, but in what I thought was a crazy decision, they dredged the half at the far end.  What use was that when people can't get that far because the arm at the "open" end is mega shallow and weeded up?

It's a pity because despite its poor reputation, much of the arm is really very pleasant with abundant wildlife and beautiful clear (if shallow) water.   If you want to see dragonflies and kingfishers and fish then it's the place to go.

And the other question is will CRT ensure there are visitor moorings not permanently occupied by overstaying residential boats? The pretty picture in the article shows a few shiny boats and what looks like cafes and bars and people strolling in the sunshine.   Having got a "virgin" site, they would have a chance to properly police the place to keep it open to visiting boats.  Once the overstayers are allowed to creep in they are hard to shift.

Some readers may recall a past proposal to extend the canal right through Slough to join the Thames, creating what would be a very attractive route avoiding the problems of waiting for the tide at Brentford.  What a popular route that would make. Sadly there's no mention of that, and indeed it would be a mega  project involving knocking down streets and houses and all that. Having said than I bet it would be a lot more popular than cutting a swathe through a hundred miles of country to save a few minutes on a train trip from London to Birmingham.  The area concerned in Slough is unlikely to be fought over by environmentalists and the Wotsit for the Preservation of Rural England.

I went up the Arm in 2016 (as part of my trip to London mentioned in the previous blog) but never got right to the end. I gave up about 1/3rd of a mile from the end after a nightmare of constant trips down the weedhatch. Walked to the end to see what it was like. Two boats there, someone said had been there months. Had to drag the boat back a mile or so to the winding hole before I could make progress again back to the junction . . . Shame, coz there are some very pretty bits down there.
Dave

I recall cruising down to the basin and then asking myself why we wasted the diesel. Oh... I remember there was a horse in the canal. Wrote about it here https://narrowboat-waiouru.blogspot.com/2015/03/slough-arm-and-horse.html

I remember making very much the same journey as Nb Carmel, with many weedhatch visits and bow-hauling partway back out, except that there were no boats in the basin. That was probably because we made this trip in October 1973!!!

That all sounds like good news, Neil. I shall watch from here with interest. I remember your comments about it before.