This was a tough one.  It boiled down to Braunston v Thrupp.  In the end I’m going with the majority view, taking into account that it’s the actual moorings we’re judging and not the village itself.  So the Herbie 2012 for Best Village Mooring goes to . . . 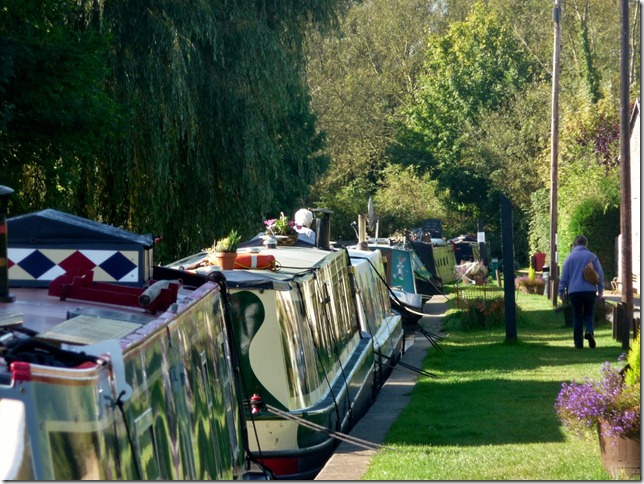 Well done Thrupp CCC it’s down to them that this is a winner.

And so we come onto an award where I might upset someone, because they can’t all win.  Its the nominations for Best Cruise on Someone Else’s Boat.

As far as I recall we’ve only had four of these this year, so they all get nominated on the shortlist. So here we go in alphabetical order of boat name.

We crewed for Adam from his mooring near Cosgrove up to Crick for the show and then back again afterwards.  If this category was judged on most the comfortable boat of the nominees then it would be a sure fire winner.  Briar Rose’s interior would be hard to find fault with, and now that she has been repainted, the outside looks pretty good too.  Adam is a good host too and despite indifferent weather we had a good trip.  Unaccountably I don’t have any photos of the journey.  Sorry Adam.

A bit of a cheat really because we only hitched a shortish ride from Sarah and Jim but it was special because we had our first go at steering a large Woolwich.  To those who don’t know, that’s about as big as a narrowboat gets.  Twenty feet longer than Herbie and goodness knows how many tons heavier.  Herbie and Chertsey actually cruised together from Braunston to the top of Hatton flight.  Two and a half days of banter and swapping stories, with the odd pub thrown in.  Steering Chertsey was a real treat and Kath and I and our friend Rick all had a go.

Sarah must be very brave judging by these photos. 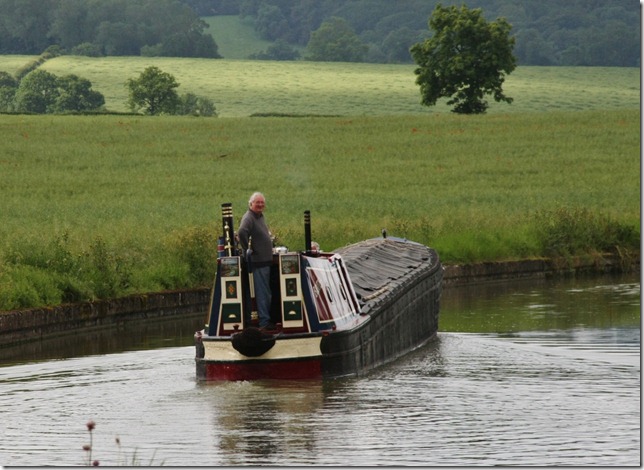 Rick is running Chertsey aground on a bend 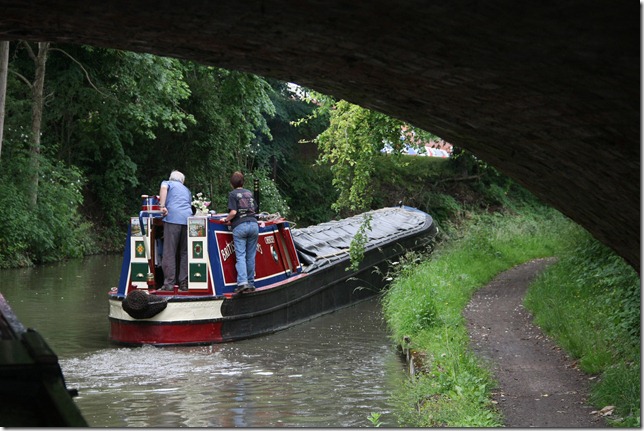 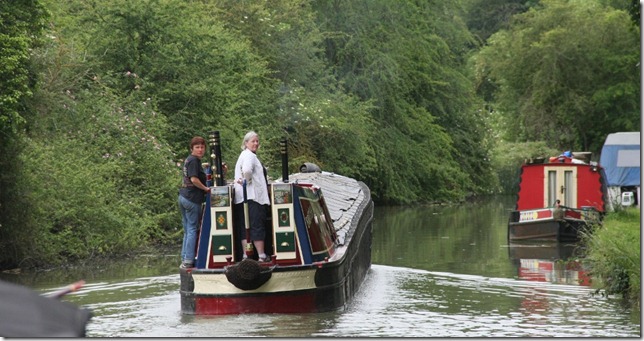 Indigo Dream gets two entries because we did two separate cruises.  The first was the rehearsal for the Queen’s Jubilee Pageant.  The weather was sublime and Richard and Sue took us out of Limehouse, all the way down to Barking. That’s way beyond the Thames Barrier where the water is lumpy even in fine weather. 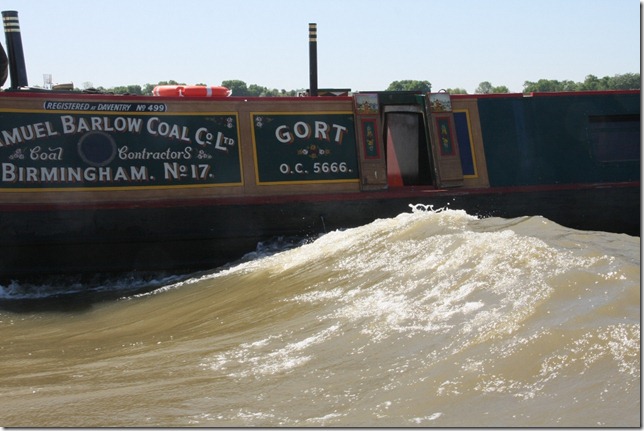 then all the way through the centre of London

up to Brentford. The weather was so hot that we slept that night with the hatch open above our heads.  Next day the convoy of narrowboats cruised back to Limehouse, but this time in formation, breaking ranks only to negotiate bridge arches. 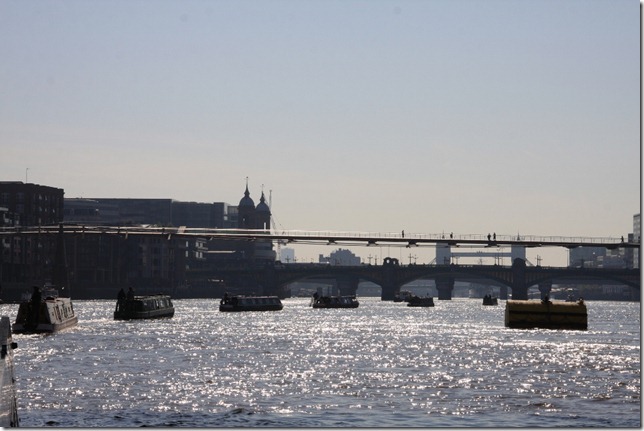 The Queen’s Diamond Jubilee Pageant.  I suppose this one might take some beating.  A shorter cruise than the rehearsal, but my how the weather can change in just a week. It was very very wet and very very very cold. Here we are leaving West India Dock early in the morning. 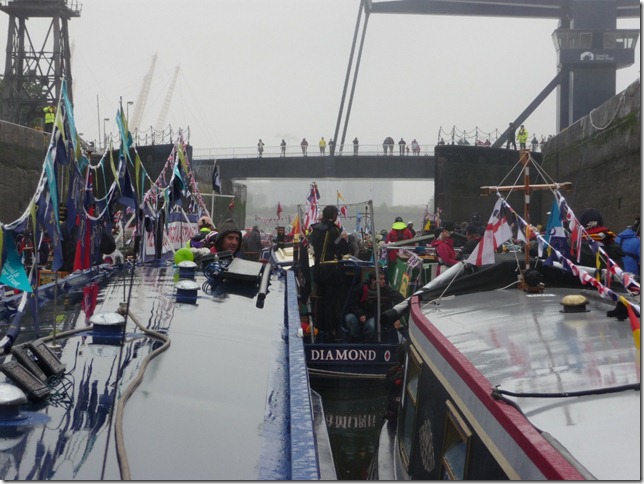 But what an event.  I dare say it was history’s most gongoozled cruise.  People on roof tops, office windows, everywhere. 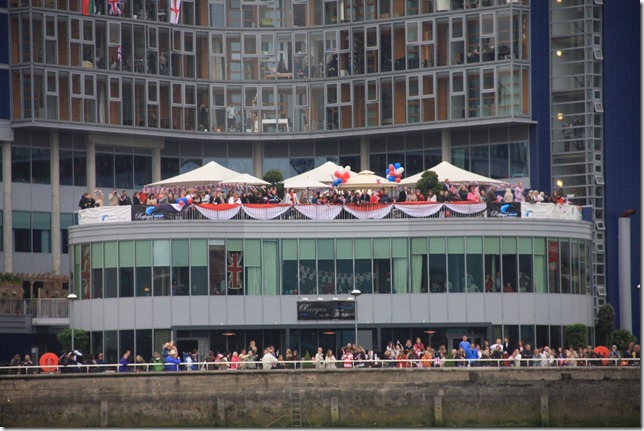 By the time the flotilla reached the Queen we were frozen and soaked.  But were we downhearted?  Naah.  We just kept on waving, just like Richard here - 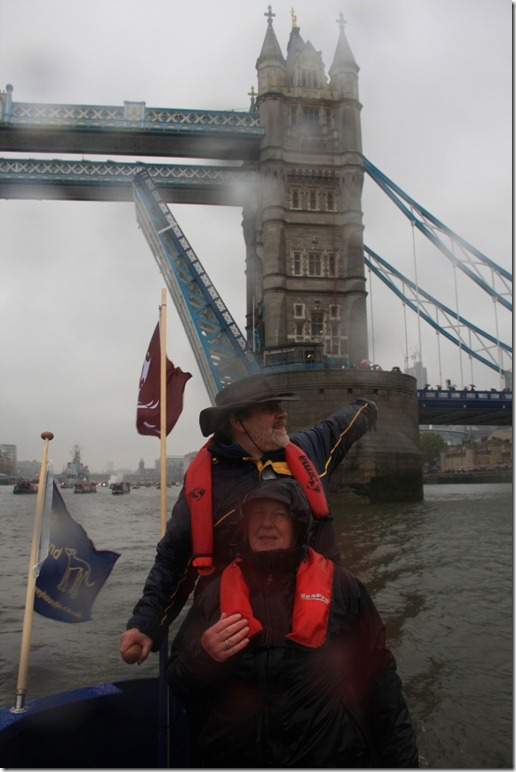 A couple of hours later, still out in the cold and waiting to get back into the dock, it was feeling a bit less like fun, but a day to remember nonetheless.

So there’s our shortlist.  On paper a foregone conclusion maybe, but will the weather swing it?  Tune in tomorrow and we’ll see.

I suppose it’s about time then that we get down to the serious business of voting Best Pub.

I'd have thought it was a foregone conclusion. So I'm hoping there's a new category: most influential shower cubicle.

Well, you did say that we weren't allowed to win 2 year's running, but if we can't beat the competition with the jubilee cruise then we'll have to take you across the channel next year!!!

You're always welcome on board, whether we win or not :-D

Fantastic photos, Neil. I love your end of year awards! I'm sorry I haven't been such a regular visitor this year - too much going on to blog as much, but I still visit as often as I can. Still, I do miss things, so your end of year nominations are a way to get 'the best of' so to speak.