Blimey, never let it be said we don't get weather in this country. We've had all sorts in the last twenty four hours, most of it pretty extreme.

It was in driving rain that I walked up to Leighton Buzzard station yesterday to meet our Peter off the train. He is joining us for a week's R&R. The strange thing is that the very last time I went to the same station was a few years back with Peter and it was pouring with rain then too. I don't think Leighton Buzzard likes me.

With Peter now on board we set off in the general direction of London. Actually it is also in the general direction of Namibia as it turns out, but we're not going that far. Yesterday we only put in an hour, arriving at the Grove pub just as the rain stopped (typical). Then of course the late afternoon sun came bursting through, giving us the best view of a complete rainbow arc that I have ever seen. With my trusty iPad, I took a panorama picture to get it all in. The stitching software made a valiant attempt but it is not perfect. Even then, it's worth showing you. 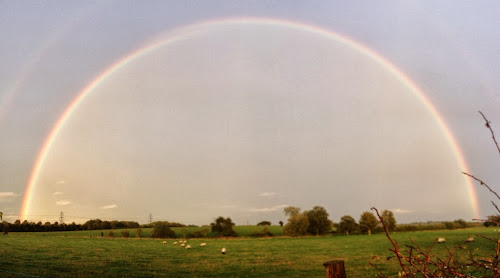 You can even make out the secondary arc in the corners.

Ten minutes later the sun was sinking, giving us a dramatic skyline which I also panorama'd (I just invented a word!).

We had a quickly drink in the Grove, it seemed rude not to. Very comfy pub.

Today we set off in bad weather towards Marsworth where we now rest for the night. Actually the rain wasn't all that bad, but the wind -phew. I'm fond of telling weather wimps that there is no such things as bad weather, just the wrong clothes. We're pretty well kitted out for rain and cold these days, but our newish wide brimmed rain hats couldn't cope with the wind. Had it not been for the chin straps Kath stitched on them, they would be somewhere in the North Atlantic by now. I resorted to my woolly beanie hat which did stay on.

Miraculously we arrived here without hitting anything or getting marooned in the shrubbery. Thinking about it now, it was probably because we were heading straight into the wind. Had it been blowing on our side we would probably be pinned to the bushes somewhere right now.

Tonight the Anglers Retreat beckons, then tomorrow we might get to Berko. The weather forecast is still not good.

Posted with Blogsy
Posted by Neil Corbett at 3:23 pm

That rainbow photo is so beautiful...

I was lucky on Sunday - we had one apocalyptic shower but James from nb Chance was very gallant and held a brolly up to keep the worst of it off my face :-)