Our few days moored up in Banbury passed without incident, that is if you discount the fact that we just missed coming third in the reindeer quiz – no small achievement  bearing in mind that we were only two against about ten teams of six or more.  Our trip back to Cropredy was a lot more interesting and enjoyable then the rather cold and damp trip down with the sun in our eyes. This time Herbie transformed into an ice breaker!

It was a very cold bright morning, although the sun behind us kept our backs warm and we were glad not to have the bright light in our eyes and the dreaded sun reflections on the water.  Once we got out of Banbury and given our customary wave to Dink and Malc (regular boaters down there will know who we mean), the ice started. 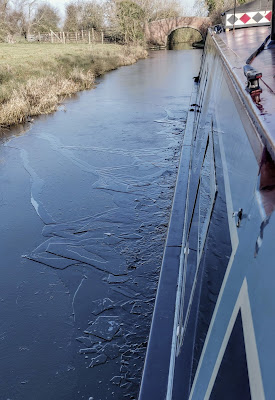 It was mostly about 4 or 5 mm thick and here and there a bit thicker, so we were crunching along leaving a clear path in our wake. 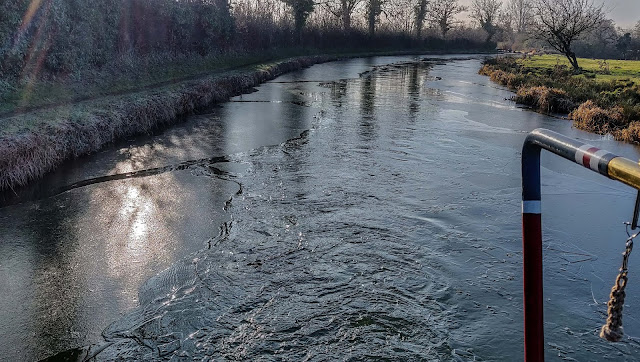 We were making quite a racket, I would think you could hear us some way off.  I wasn’t too concerned about scraping off Herbie’s blacking as were due to be re-blacked this year anyhow, but in the event I think it stayed intact.  As to the locks, you'll be horrified to know that despite the ice I still managed to jump across the open bottom gates rather than walk round! Elf and safety would have a fit.

Patches of ice came and went and it was hard to work out why some places had frozen over and some not.  Some shady places were clear, some sunny spots were frozen.  My bet is on shallow water and lack of cover being responsible for most of the ice.  Anywhere where there was a bit of a ripple on the water was clear.  All in all though I suppose we were breaking ice for about half of the five miles.  Mercifully, the marina was totally unfrozen when we got back although the sun in my eyes when we turned made me make a right pig’s ear of getting back against our pontoon.  That’s my excuse anyway.