Little did I realise when we were aboard Indigo Dream on the pageant rehearsal last year that we passed the spot were the Thames’s most tragic accident had occurred some 120 years earlier.  My two photos here were taken as we edged along the north bank at Barking – well out beyond the Thames barrier – and some 11 miles from London Bridge. 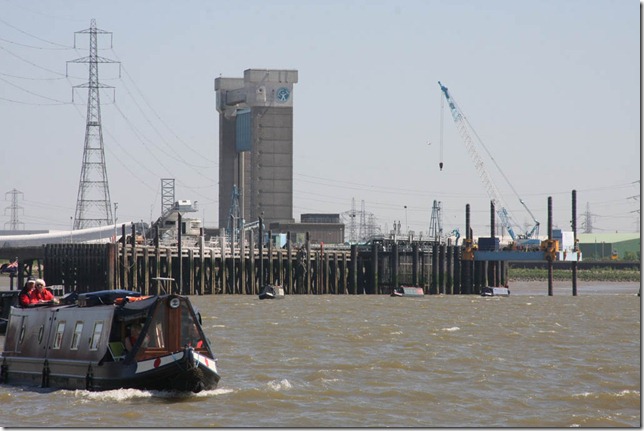 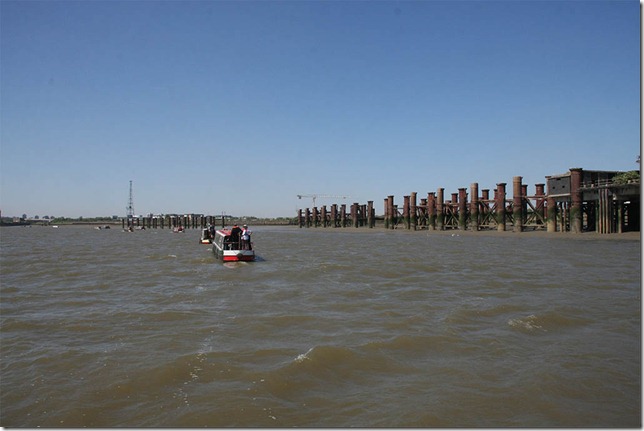 Browsing in the London Metropolitan Archives today while Kath was ancestor chasing, I came across the story of the SS Princess Alice, a pleasure paddle steamer that collided with the 900 ton displacement SS Bywell Castle which was running out of London on the ebbing tide, very close to where I took those pictures, but on the other bank.  It happened in September 1878.  It was dark and as the boats approached from either side of the bend just up river from Barking Creek they could each only see the navigation lights on the other boat.

SS Princess Alice was carrying over 700 people returning from a pleasant outing to Gravesend.  On her deck the band was playing and couples were dancing.  It seems that she headed out towards the Barking bank and then seeing the Bywell Castle, swerved back in towards the south bank.  As I understand it, the skipper of the Bywell Castle, who was aiming to pass behind the other ship passing port to port saw the change in direction too late and his boat, much bigger and stouter than the other ploughed at and angle into the Princess Alice just forward of the starboard paddle wheel.  The Princess Alice broke in two and sank almost immediately.

Few of the revellers could swim and in a matter of minutes and before any rescue could be arranged over 650 passengers and crew were drowned .  To make the matters worse the water was thick with recently discharged raw sewage from the Beckton Sewage works outlet opposite.  It is thought this contributed to many of the deaths.  A subsequent Board of Trade Inquiry and an inquest both placed blame on the skipper of the Princess Alice, (who perished in the disaster) although mistakes were clearly made on both sides.

The Bywell Castle skipper claimed he was following the Rules of the Road, which many had learned via this little poem.

The Rule of the Road


When all three lights I see ahead,
I turn to Starboard and show my Red:
Green to Green, Red to Red,
Perfect Safety -- Go Ahead.


But if to Starboard Red appear,
It is my duty to keep clear --
To act as judgment says is proper:
To Port or Starboard, Back or Stop her.


And if upon my Port is seen
A Steamer's Starboard light of Green,
I hold my course and watch to see
That Green to Port keeps Clear of me.


Both in safety and in doubt
Always keep a good look out.
In Danger, with no room to turn,
Ease her, Stop her, Go Astern.

For some reason his final order of Full Speed Astern was not followed in the Bywell Castle engine room.  So with engines at idle and the tide and momentum behind them they ploughed through the flimsy sides of the Princess Alice unhindered.

A large proportion of the dead were women and children.  120 of the victims were buried in a mass grave at Woolwich Old Cemetery, Plumstead.

A very sad story but one I thought worth sharing.  Maybe you already knew about it.  You can find out more on Wikipedia.

What a tragic tale - but also very interesting - thanks for posting it - there's a good reminder to keep a good lookout at all times!

I wonder if the clipper skippers read your posts? :-)

Great post, well written. We are headed London bound in the Spring and will make a visit here. Cheers J