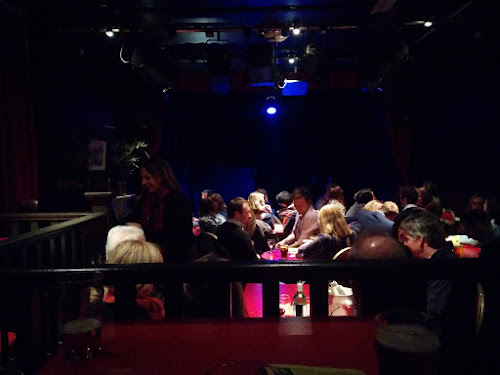 Here's a picture of the Canal Cafe theatre above the Bridge House Pub in Little Venice. Not very big is it? Photos are not allowed during the performance so you'll have to imagine the stage. Last night's News Review was as funny as usual, the highlight for me being the Donald Trump sketches, one with him singing Imagine -”imagine there's no Muslims" etc another where he is confronted by Jesus over his lack of Christianity only to say he was taking no lessons from a Jew with a Mexican name. You had to be there I guess, but it was very funny.

We did the touristy thing yesterday afternoon and took a bus to Portobello road market. The only thing we bought was a cake! If you are ever there, seek our Garniers bakers shop and go in for a cake or a savoury and a cuppa. Their stuff is to die for, and as for bread, I think they had nearly twenty different types, all of course fresh baked.

Still hardly any boats moving in Paddington. I strongly suspect there are a number of overstayers. I feel another letter to CRT coming on. Perhaps we ought to get up a petition of boaters who are put off visiting London by the situation. The London boaters themselves have a strong voice collectively, but us visitors currently don't.

Posted with Blogsy
Posted by Neil Corbett at 11:05 am

Neil, Kath: I took an elderly friend to our local railway station yesterday. While we were waiting for her train she told me that she was going to celebrate her birthday at a Chinese restaurant at Paddington Basin. I told her to look out for Herbie. (Just in case you get accosted by her! She's called Leonie.)

We have always thought that C&RT ought to enforce the mooring limits in Paddington very rigorously, it being the nations capital and, I would suggest the number one honey pot site.
We are fortunate that having visited twice so far, on each visit we have been lucky to find a spot, but it's a long cruise into London with your fingers crossed.
I would be happy if they extended the Rembrandt Gardens booking scheme to include all the Paddington Arm, even adding a small charge to help finance it.
I would certainly support your petition.
Rog
nb Paneke
PS very much enjoy the blog

Count me in on any such petition - I'd love to take Carmel to London, to my childhood haunts, but the thought of rocking up mid afternoon and having to go on and on and on until 10pm to find a mooring spot somewhat puts me off . . . . .
Dave K

Sounds as if you are having a ball, Neil. I'd love to have been there at that review!

You could count us in on your petition too!