This year we did the most extraordinary cruise we have ever experienced, or probably ever will again. You might have thought our choice for best cruise of the year involved balmy weather and  beautiful countryside, but it wasn’t at all like that, to put it mildly. For a start, we had to crawl out of bed at  five in the flippin’ morning.  Then not long after we got out on the river, and through the Thames tidal barrier,it poured with rain. As we pushed on in grey weather down the Thames estuary the river got wider and wider, the ships got bigger and bigger and the swell got higher and higher until we and our “sister” boat Doris Katia were jumping up and down like bucking broncos.  Were we scared?  Well just a bit, ‘cos we were miles from dry land. 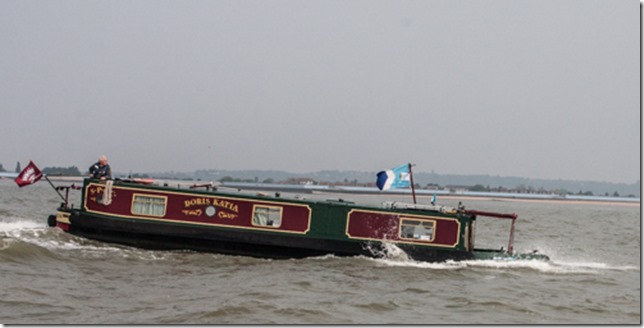 Soon afterwards we were dodging dangerous shoals and peering into the mist looking for seemingly non existent but vital marker buoys, some of which were guarding a shipwreck stuffed with high explosives! 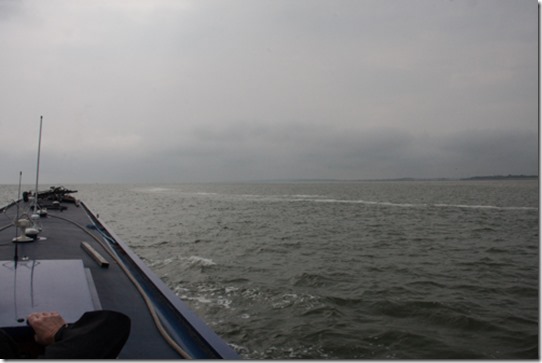 It’s fair to say that narrowboats aren’t really designed for this sort of stuff, but they coped remarkably well.  Then after weaving our way through a bewildering group of islands and dodging various dinghy races we eventually found our way in the river Medway and the sun eventually appeared as we passed fascinating places like Rochester and Chatham eventually to arrive just outside Maidstone eleven exhausting hours after we set off.

I don’t know about you, but if that’s not the cruise of the year, I don’t know what is – even though it wasn’t on board Herbie.  We were of course the guests of the wonderful Sue and Richard aboard Nb Indigo Dream.  Thanks guys.  So to complete the formalities I hereby declare the winner of Best Day’s Cruise 2016 as

The Bow to Medway Cruise on Indigo Dream

Well it couldn’t be anything else could it?

if you missed my original blog posts about it, visit our archives for last May,

but fasten your seat belts first

Next up is the award for Best (or favourite) rural mooring for 2016 where a couple of new favourites vie for the prize.

I felt seasick when I read the original blog - it's just as bad looking at the photo this time! You are all very brave ....
Debby

Thank you, thank you!

We're having to go to extraordinary lengths to stay in the Herbie Awards but it was soooo worth it - when else do I get to wear my tiara?!

We caon't thinks of anyone we'd rather have as crew :-)

I couldn't agree with you more! A great choice.