Ladies and Gents, after yesterday’s talk of pub grub, the Strictly Come Noshing judging panel, aka Kath and yours truly, have come to a decision.  I think the answer was there all along really, because we both voted for the one pub that offered good food of a type that you don’t find in all the other pubs.  So 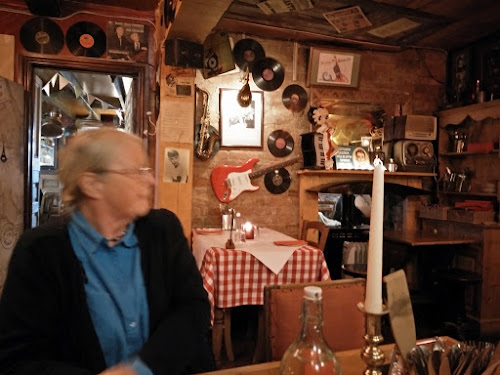 We’re really looking forward to going back there.

Meanwhile life goes on and yesterday we learned an interesting snippet of news.  A certain Jim might be quite interested.

Last night we went along to see Topette – an Anglo French band.  Any band with a French bagpiper plus Andy Cutting gets my vote every time.  Andy is an old friend of ours and we delight in his success. He’s one of those geniuses adored by those who know his music and totally unknown to everyone else. Suffice it to say that he is the accompanist of choice for most of the top English folk artists ,not to mention having played with Sting and the Who!).  If you’re curious here’s a link to one of his many youtube clips.

Anyway, why am I telling you all this? Knowing that we were boaters, Andy was excited to tell us that he now has a share in a historic working narrowboat Nb Spey, and he has been having lessons in operating its Bolinder engine ( a non trivial task!).  Spey currently resides up North but they are hoping to bring her down south next year to attempt the K&A. So if you here the doink doink of a bolinder blended with some beautiful whistful melodeon music that’s who it’ll be.  He gets my vote for a guest at a Historic NarrowBoat Club rally.

Extraordinary coincidence - I was researching Andy Cutting only lunchtime today with a view to tracking down some more of his work other than what I've got on June Tabor albums. Any recommendations?

Going to Ellesmere Port for Easter first I hope!

Student daughter has shown excellent taste and moved into a house on Canal Street, just down from the Bookbinders, so we now have no excuse not to give it a go.

Sarah. The CD I like of Andy's is Lisa, with Chris Wood. They seem almost telepathic playing together. Some of the tracks are sublime. Andy is so consistently good that you can't go wrong really.

Simon. That sounds dangerous living so close to such a good pub. I'd never be out of it.

found the Bookbinders when in Oxford last year and reckoned it to be just a wonderful find! Cant disagree wit you choice!
Richard NB Pendle Warter

Apparently it's not dangerous living so close the Bookbinders, because it's frequently too full to get in. This hasn't stopped careful sampling of their rhubarb gin though........