Before I announce the winner of Worst Piece of Canal Infrastructure (along the S Oxford), I realise I left another disastrous piece of kit out of the nominees.  Roundham lock bottom gate.  "Ah yes", say all those who have encountered it this year, "The one where the balance beam broke so they pinned it up with a length of arnco rail."  Well despite the (I hope) temporary repair - several months later it was still in that state, it does little to assuage the fears of those who use it, let alone anyone who dares to try and cross it.  Another accident waiting to happen I fear.  How I wish I had taken a photo of this glorious bodge up so you could all see it.

Nevertheless, dreadful though Roundham lock is, users of the S Oxford will I am sure agree that there can be only one winner in this hotly fought contest.  It is the calamitous

inoperable by single handers and terrifying to all others.

I take no pleasure in making this award.  Regular readers of this blog (all three or four of them) will know that I am not usually one to grumble, especially at CRT, but this bridge takes the proverbial biscuit.

And so, on to more pleasant and delightful topics, and we start with

For this prize we're looking for something making life better or easier for the skipper or crew whilst cruising, and for our first nomination I'm putting up something we made for ourselves this year.  Quite a lot of other boaters already have something that fulfils this function, but until now Herbie has been lacking.

It's a comfy steerer's seat. 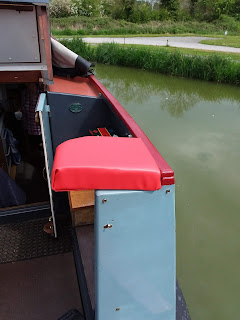 Bolting securely through the steel sheet that goes across the rear corner, it's a piece of plywood (with umpteen coats of varnish) topped by a thick chunk of foam and wrapped in vinyl.  Sitting up there we can see a long way in front and reach the tiller to steer.  My bum is eternally grateful because I used to try and sit on the bare steel which is only half the size it needs to be for comfort.
Some years ago our good friend Rick made us a wooden seat that hung outside the handrail.  That works for a passenger, but is too far over for the helmsman.

I claim no patent on this gubbins because it was flagrantly copied from one on Nb Stronghold and created by the lovely Oakie.

Cost ?- less than a fiver.  Faults?  As a right hander I would prefer it on the port side, but sadly the morse control is in the way.

Our second nomination cost us considerably more and we had no hand in its development.  It is the Go-Windlass - seen here alongside its more conventional counterparts. 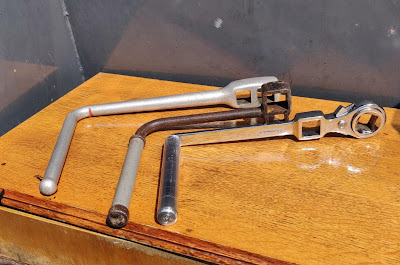 Apparently these were selling like hot cakes at the Crick show this year, which when you consider the eye watering price, must say something.  I think we paid something in the region of £90 for ours.  As you can probably see, it has a ratchet mechanism which is a big help on the very stiff paddles found on a few of the S Oxford locks..  Compared with the other commercial ratchet windlass you sometimes see, it's quite neat and light, hardly any heavier than the one in the middle of the picture. I'm happy to use it all the time, even when I don't need to set the ratchet.  Lastly, an important feature considering the price, is that it is magnetic so there's a chance of retrieving it if you drop it in the water.

Lastly I'd like to nominate something we've had for a very long time, but is always very welcome when we need it.  I deployed it quite recently and reminded myself what a good thing it is. (I may have nominated it in years gone by, but it deserves another mention if so.) It's cheap, easy to use, and it works splendidly.  I can well remember years ago when cruising in very cold weather, the agony of groping round a fouled prop with numb fingers and a forearm blue with cold.  That was before I bought a pair of Pond Gloves.  Aah deep joy - no more rolling up your sleeves or taking off you jumper on a freezing day, no more dread of what you are putting your hand into and no more painful numb fingers.  Just pull on the elbow length (plus) rubber glove - it's not tight and stretchy like a Marigold so goes on and off easily, and dabble away.  We keep ours on top of the weedhatch cover ready for use. So simple, so cheap, so good.

Not sure how to choose a winner here - sophistication at a price, or simplicity at low cost.  Any thoughts?

Decision tomorrow along with nominations for an old favourite - Best Pub Grub.

The bum comforter would get my vote. Comfort while cruising is very important.

Six years ago we bought the other ratchet windlass on the market, have never used it, too heavy to cart around,it's going rusty in the top box. Yours looks much more manageable.


Thanks for the plug Neil. I think you might be boosting my readership. I agree with the pond gloves, which save a lot of discomfort and with the Nags Head at Abingdon, which was closed for many years and is now so popular.

Nothing like turning up late for the party! Thanks for the tip about the pond gloves - Chris will be finding a pair under our Christmas tree! We are doing one of the BCN Explorer cruises in 2020, so I suspect they will be well used. Happy Christmas. Jennie