Yesterdays nominations of Away From It All Moorings drew a couple of comments, one in favour of each, so here's our casting vote.  I think it has to go to

for the solitude, the wild flowers, the walks and the views.  You can even find fossils in the quarry walls and stuff like this lump of quartz I picked up. 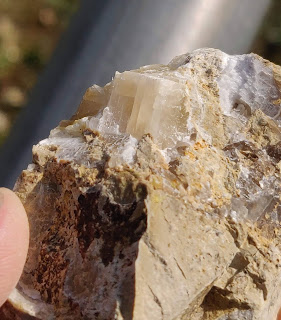 For those who don't know where this place is, it's on the South Oxford canal about a mile and three quarters north of Enslow, or a few minutes north of Pigeons Lock. If you don't have a boat, it's even worth a visit by road, just outside Kirtlington village plus short walk.

Now onto something possibly hitherto unimaginable.

I'm no Oliver Reed, but I confess I have downed a few pints in my time and in my twenties I must have been drinking at least double what they recommend as a limit these days.  Now in my dotage I find that my digestion can't take that sort of punishment, so although I still like a pint of beer of cider or a glass of wine on the boat or the towpath in the evening, I'm always conscious of alcohol content.  This year I thought I'd try out a few of the growing number of very low alcohol or even alcohol free drinks. Which leads me to today's Herbie Awards category.

For those who have yet to sample some of these drinks, let me start by saying that quite a few of them are deeply disappointing.  Wines are the worst, I only found one that was remotely palatable which was Eisberg Cabernet which you can get from Tesco.  So the old low alcohol vino won't be getting any prizes this year.

Conversely virtually all the low alcohol ciders out there are quite nice, providing you don't mind them a tad on the sweet side.  Sainsburys do a good own label one and the Stowford Press one is fine too.

Beer of course is a much more complex drink and that's where the big disparities are between products.  I started by trying Brewdog Nanny State.  They're a good brewery usually so I was disappointed when I tasted this stuff.  I bought four cans some months ago and two of them are still in the fridge - not many beers survive there for very long I can tell you.  Maybe there is a clue in the name Nanny State which implies that their heart is not in it.

So onto the rather better stuff that I discovered.

Wheat beers seem to do OK without alcohol.  The one I am happy to buy is Clausthaler which most supermarkets sell.  Not everybody likes the slight sourness of wheat beers, but if you do, Clausthaler is quite enjoyable.  There's still a hole where the alcohol should be, but it's a small one.  I continue to buy it.

Beer drinkers probably know Speckled Hen by Morland, and that has a low alcohol version which is tolerable, although far short of the real thing.

A past Herbie Award winner, Adnam's Ghost Ship also has a low alcohol version which is drinkable but not exactly enjoyable.

One of our favourite beers in a bottle is Shipyard brewed by Marstons, and that now has a low alcohol version called Shipyard Low Tide, and that is very hoppy in the new world style and I continue to buy it.

Another good one is Infinite Session Pale.  This comes in cans and is in the same mould as the Shipyard one as regards style.  Sadly it's hard to find.  Supermarkets tend to stock Infinite Session IPA which is ok but I don't think is as good.

So there you are, if you want to join me in cutting down the old Units of Alcohol and telling less porky pies at the doctors, try some of these.  One of them will get a Herbie Award in the next post.  I can't decide right now.  You can send in your vote if you like.

After that we can have a look at Bodge Up of the Year.