Promise of better times on the Basingstoke canal

Somehow the word Basingstoke just doesn't conjure up a pleasant image. I always say it would sound more up market if it had been called Stoke Basing. Visitors to the Basingstoke canal might however be surprised to see what an attractive waterway it is - all 33 miles of it. Much of it is lined by oak woodland and the water is generally clean, if a little peaty. Some claim it the most attractive of England's canals. This photo, taken on our walk today, shows a fairly typical spot. 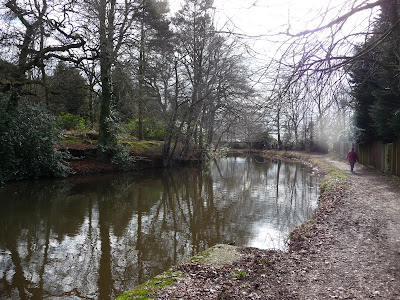 Apart from the wooded sections there are also a few huge flashes (bits where the canal widens out into a lake) like this one at Ash rejoicing in the name of the Great Bottom Flash! 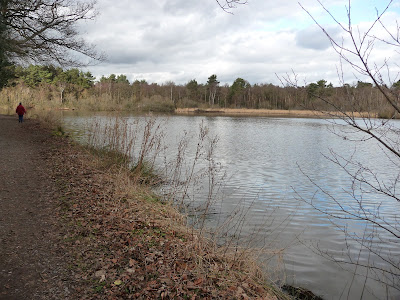 As far as I recall its probably bigger than the much more well known Tixall Wide on the Staffs & Worcester.
However over the last two years the canal has mostly been closed to boaters because of severe maintenance problems, and consequent funding issues. A lot of the canal passes through sandy soils and leakage has been a perpetual problem, especially around lock chambers where huge voids keep being created by seepage through lock walls. Now they seem to have found a clever and surprisingly cost effective solution - pumping a setting foam into the voids. A bit like the stuff you can buy in cans for small building jobs perhaps. Apparently they've done a whole large flight of locks for £10,000 which is small beer these days for major leakage works.
So now it seem the canal will be reopened this summer in time for a boaters rally at the end of May. What's more the canal authority has waived the requirement for the usual Basingstoke Canal visitor licence for boats attending the event. If we weren't planning to be elsewhere then , we'd be going.
Posted by Neil Corbett at 5:14 pm