CRT Docklands office - and are we getting anywhere with cyclists?

Yesterday I went to a volunteer meeting at the CRT Docklands Office.  I’d not been there before. The building itself is pretty unremarkable, just a typical modern office block, but the view out of the window is such that if I were working there I'd never get anything done.

The office sits at the entrance to the massive South Dock on the Isle of Dogs  - that’s just the entrance lock in the centre of the picture.  We used it during the Queen’s diamond jubillee extravaganza when 40 narrowboats barely half filled the lock. 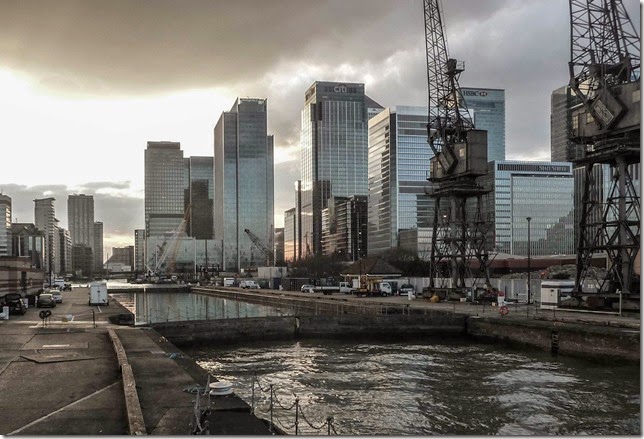 and the office  windows look out across the Thames to the O2 arena and down river so you can the the river traffic which is busy in this area. 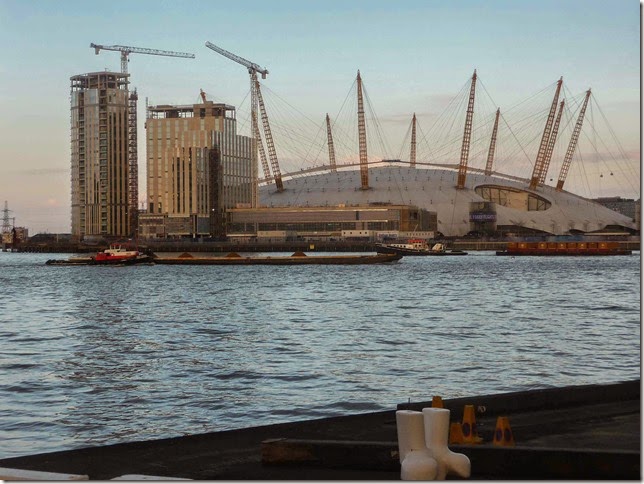 Interestingly the boat nearer the camera appears to be pushing its barge from alongside.  It was going at a fair old lick.

Luckily we were able to concentrate on the business on hand (more of which in a future post) because it was an evening meeting and it soon got dark.

Anyway enough of all that.  What did I learn at the meeting that I can tell you about?

I've posted before about our Share the Space events where we attempt to stop cyclists to educate them about the dangers if going too fast on the towpath and I’ve told you about about the posters we have been sticking on bridges etc.  Like this 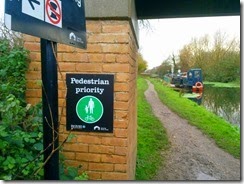 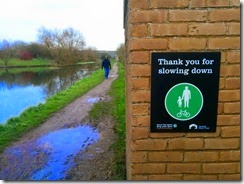 All this has only been in London up until now but a nationwide campaign on the same basis is due soon.

The question is "does it work?" Well I have been pretty sceptical, but last night a couple of the volunteers who work in the congested areas of the capital reported that they have definitely noticed an improvement in cyclist behaviour  in recent months, especially in respect of slowing down and alerting pedestrians as they pass. The feeling is that this us more due to the poster campaigns than the events.   There are a posters at every bridge, access point and pinch point, so people can’t miss them.  I’ve put up a fair few myself.  We’ll have to wait and see what happens when it goes national.

The towpath events have slowly transformed into general  ‘meet the towpath users’ events and have been useful in highlighting problems with rubbish, swans, and yoofs to name but a few.  We’ll be doing more of them because they want to use the London area to demonstrate them to CRT staff and volunteers from other regions as the campaign spreads.

PS Did you know that CRT makes good money from film crews who want to use the canal or towpath as a film location? Over £120,000 in the last year or so.

I’ll have rather more to tell you in a little while when a new ranger structure is launched.

PPS  I spotted this on my walk to the office yesterday 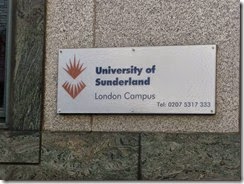 If they won't come to Sunderland, we'll go to them!

Someone at work today was talking about visiting Coventry University's London campus - and Coventry are about to establish a new one in Scarborough too.

The really canny ones get a campus in Mauritius.

Outside London (M25, for the sake of argument) I find that cyclists are fairly tame - a few commuters in some places, but in my experience happy to be equal towpath users.

In London, cyclists will seize on any route that isn't a packed main route, and, chances are, only stop using when there's something preferable to use. New routes are - mimimally and slowly - being introduced, but will never cover all of even central London, and hell, canals are too nice an option, even if on the way to work at 8am.

London commuters aren't incompatible with courteous towpath use, but all we need to tackle there is human nature... :-(

Surely this is a site well worth seeing.