The other day I accidentally found a cute way to drain off the plumbing in Herbie.  Now winter is approaching I like to leave the pipes empty when we leave the boat cold for any length of time.  In the old days I just used to close the water tank stop cock, open all the taps and switch off the water pump.  Not forgetting also to drain our morco water heater.  Then when we had those very cold winters in 2009/10, I got into the habit of removing the water pump (it only takes a couple of minutes) and draining the dregs of the pipes from some drain cocks near the floor at the back of the boat.  A bit of a pain getting at the drain cocks, they are at the base of the coat cupboard under a pile of lifejackets.

This time, I was draining the shower hose and taps by putting  the free end of the shower hose in a bottle lying on the bathroom floor.  I don’t drain it into the bath because you can’t pump the sump really dry. Then I noticed that because the shower hose had been full of water, it not only drained itself into the bottle but also kept going, acting as a syphon to drain all the low lying pipes.  I should explain that the pipes lie in a conduit a couple of inches above floor level.  So as long as the bottle was right on the floor, I could drain everything, as near as dammit, through the shower hose.  I checked afterwards by opening the drain cocks at the back and no water came from them.  Well just a drip or two.  There must be some left behind when the syphon breaks, but spread along 40 ft of pipe I doubt it would be enough to burst a plastic pipe if it froze.   So that makes draining down dead easy.  You have to remember to open all the taps first or it won’t work.

I know some people empty their water tank too.  I’ve never done that, reckoning that it has plenty of expansion space, and that such a large mass of water lying below the canal surface would take a long time to get seriously frozen.  Neither have I drained the calorifier as it is lagged, but maybe I ought to.

Actually the best way to keep a boat safe if the weather gets really really cold is to go and stay on it. Light the fire and get cosy. We’ve done that in the past and really enjoyed it.

One advantage of having our engine taken out to do the camshaft recently was that the engine cooling system had to be refilled, so I got them to fill it 50/50 with 5 year antifreeze, the red stuff.  We were about due for an antifreeze change and I recall from when I last did it that getting rid of the old coolant from the engine bay floor was a rotten job.   At Calcutt they had the answer.  A serious wet and dry vacuum cleaner.  Every boat yard should have one.  I’d gladly pay a modest sum to use it every so often. 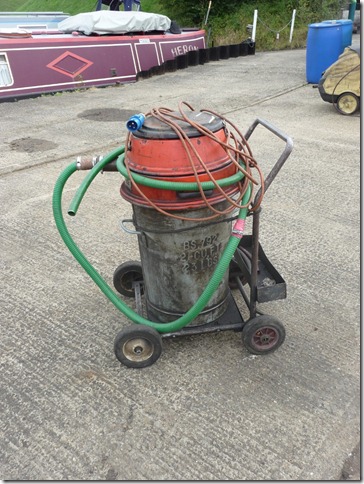 Boating gets you drooling over the strangest things doesn’t it?

I must have had too much time on my hands... I looked up BS792 (embossed on the side of the grey bin under the vacuum cleaner). It refers to the specifications for - wait for it - mild steel dustbins! Mind you, I couldn't tell you what those specifications are (you'll be relieved to know). I'm not shelling out £48 to British Standards for that!

I know of at least 2 people who have lost calorifers in the past couple of hard winters. One leaked straight away, the other was bulged and gave up a few months later.
With the cold we have had over the past years lagging wont help for long.
Mine is plumbed via a valve to the shower drain, so I just pump it out.

Neat idea Brian. I don't thnk that's feasible on herbie, The calorimeter is a good 20ft from the shower. Draining the calorimeter is easy. It's getting rid of the water from that low level in the boat that is the problem I have to crack.