“Rivers are full after the wettest April to June on record, followed by more rain in July, September and October. The earth is saturated and in many areas there is no more space left in aquifers to store water that seeps through from the surface. The Environment agency warns that people should be ready for floods even with relatively small amounts of rain.”

So begins a BBC news item today.  “Aha,” I think to myself. “If I take a look at the CaRT Reservoir Watch figures then, it’ll presumably tell me the reservoirs are all full”

Well, not entirely it seems.  I was a bit surprised and puzzled by what I saw.  Here is my updated graph, now showing percentage full of selected canal reservoirs from January 2011 to October 2012. 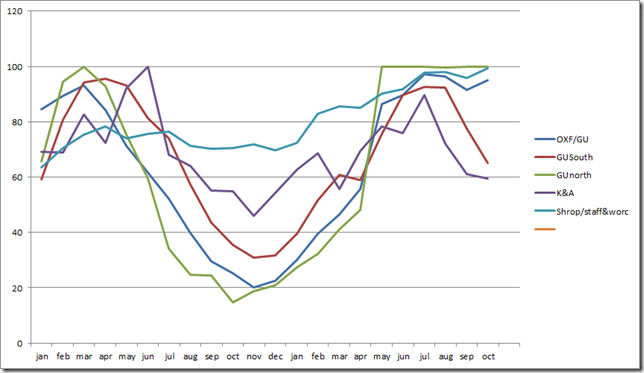 Compare this October with last October and you’ll see a huge difference. As usual, the K&A figures are all over the place.  We still don’t know why, but we’re used to it.  Sure enough a number of the others are full, but what’s going on on the GU South?  I wouldn’t have thought that the boat traffic there was any more than, say, the Oxford, and a number of the GU flights have back pumping too.  I’d love to know the answer.

As to others, the BCN, Chesterfield, Huddersfield Narrow and the Lancaster are all at or below 70%.   I thought they were up in the rainy bit.  Anyway, the people in the know seem comfortable with the figures.  The comment on the CaRT site includes the following:

As for those poor boaters on rivers, they’ve had a tough year haven’t they.  I’ve lost count of the number of blog reports of folk stranded in dangerous conditions  on the Thames and the Nene this year.  Now I see the Yarwoods and the Matilda Roses look set to spend the winter stranded on the fens.  I can think of worse places to be stranded but I hope they have plenty of woolly jumpers. It gets cold out there.

We did the dash back to Limehouse a few weekends ago - much as I love the Thames, I'm glad to be off it - the red boards are starting to creep back up - it's only a week or so since they crept down!