Drive plate failure–and why it makes me want to weep

Gubbins alert. Gubbins alert. If you have no interest in bits of engines breaking, look away now.
On Sunday Rick came over and we played with poking a screwdriver into Herbie’s flywheel casing. The reason ? To have a dig at the drive plate.  Now some of you might know all about drive plates, but for those who don’t.  I’ll try and explain.  Lets start at the beginning.

Now that our engine is now running smoothly thanks to our new camshaft, it enables us to hear a nasty clattering sound in the background.  Not all the time.  I suspect it comes and goes depending how hard the engine is having to push.  The clattering seems worse when the engine is lightly loaded.

Reading around on the forums, it’s a fair bet that the clattering is the drive plate.  I know little about drive plates save this much:

The drive plate acts as a cushion absorbing sudden changes in torque transmitted between the engine and the gearbox.  So when you engage gear, the running engine suddenly faced with the load of the gearbox and propeller feels less of a shock.  If you have a diesel car, there’s a fair chance it has a type of drive plate known as a dual mass flywheel.  The one on our old Focus got very clattery and I had to have a new flywheel and clutch costing me over £600.

In a boat engine it all goes together like this (yes, another Sketchup diagram) 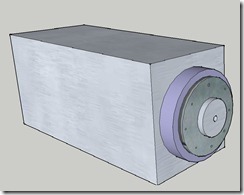 The big rectangular block is the engine. The thick mauve disc is the flywheel and the drive plate is the thing bolted on to the flywheel. The smaller disc at the front of the drive plate is somehow flexibly attached to the back plate allowing a certain amount of torsional play between the two. At the centre of the front plate is a splined hole into which the input shaft of the gearbox fits, and the gearbox drives the propeller shaft and the propeller drives the boat. So when the boat goes into gear, or there is a sudden change in torque for whatever reason, the plate absorbs the torsional shock. With me so far?

Like I said I don’t know what connects the two halves of the drive plate and how the flexing is managed. There seem to be some nylon parts in there. Anyway we were able to poke at it with a screwdriver and it seemed to us that the front plate was pretty loose and had little torsional resistance. Reading up on the forums, this sounds like a failed drive plate which usually sounds like “a bag of spanners rattling”. Aaah yes, that’s the noise we get.

How do you get at it with a screwdriver when the flywheel is encased ? – I hear you ask.  Ah well Herbie’s engine, unusually,  has two gert big  holes in it’s flywheel casing.  They are there to allow the passage of drive belts for a long gone 240v  generator that used to be on the engine before we got the boat.

Anyway here is one of the holes so you can see. 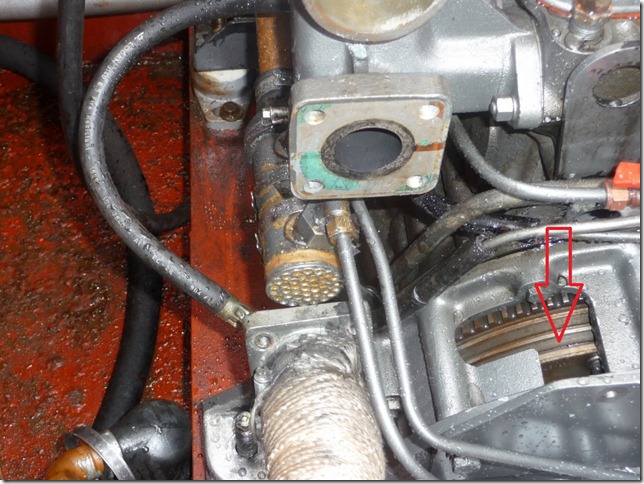 Don’t panic that the exhaust pipe has fallen off and the gearbox oil cooler is disconnected.  I took the photo when they were getting the engine out for the camshaft job.

The arrow points at the drive plate that is bolted onto the flywheel.

If the plate has failed, then why? Well apparently they often do in time. I suspoect our previous engine rough running and dodgy engine mounts had something to do with it. On our old car the plate failed after 95,000 miles and eight years. Herbie’s engine has done the equivalent of 150,000 miles and is eleven years old, so I can’t grumble really. It’s a routine job for a good mechanic to replace the plate, but I’m gutted that we didn’t spot it when we had the engine out because it would have been dead easy to do at the time and would have saved a lot of labour cost.

Look, they had it at their mercy! A ten minute job. Grrrrr!  It makes you want to weep.  Why didn’t they notice it when they put the gearbox back on? 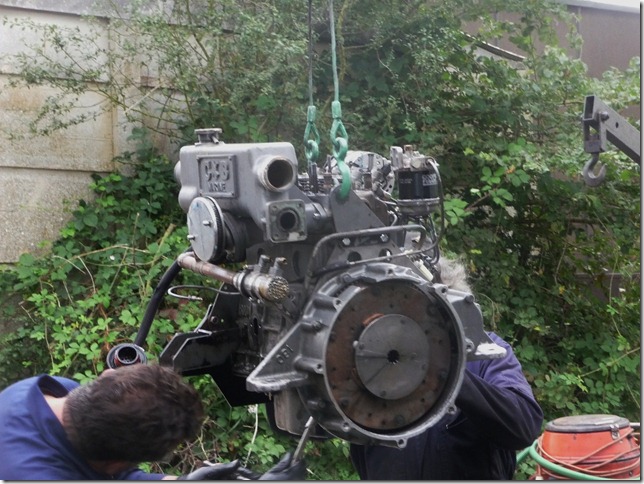 The plates themselves are about £80.  The engine doesn’t have to come out, just the gearbox has to be pulled off.  We’ll have to have it done sooner rather than later because it can fail completely and engine will fail to drive the gearbox.  What’s more, if the plate falls to bits at speed, it might damage something else.

Does anyone know what’s inside these plates and how they work?
Posted by Neil Corbett at 12:48 am