They say if you can remember the sixties, you weren’t there.  Well I can and I was. It was fab.

I’ve been reading through a 1960s book that Rainman kindly gave to me. Inland Waterways of Great Britain and Ireland compiled by Lewis A Edwards Hon Sec of the IWA (1950-58).  Published in 1962 this tome takes over where the 1904 Bradshaw’s (see my recent post) takes off.  It uses a lot of the original Bradshaw’s data but augments it and updates where necessary.  It also has some very interesting general remarks about the state of the waterways at that time e.g.

In the Foreword by Robert Aickman – “Over the last 100 years, through public inertia and the destructive activities of those responsible for competing forms of transport, British inland waterways have fallen largely into ruin and almost entirely into oblivion” Well at least bits of it have improved since then.

In the Preface: “The National water shortage, coupled with serious flooding in many areas is an anomaly the nation can ill afford . . “ Ring any bells?

Then in a very detailed and  interesting section on Derelict Waterways, “Usually canal and river navigations were promoted by Act of Parliament though there were numerous short private canals constructed.  These Acts almost invariably laid down statutory rights and provisions, which in many cases have been flagrantly ignored.”

Too right! You don’t have to look far into the detailed data sections to spot one or two of these flagrant breaches of responsibility.  For example on the Middle Levels the book reminds us that headroom under bridges should by statute have been 8ft.  Oh Yeah? 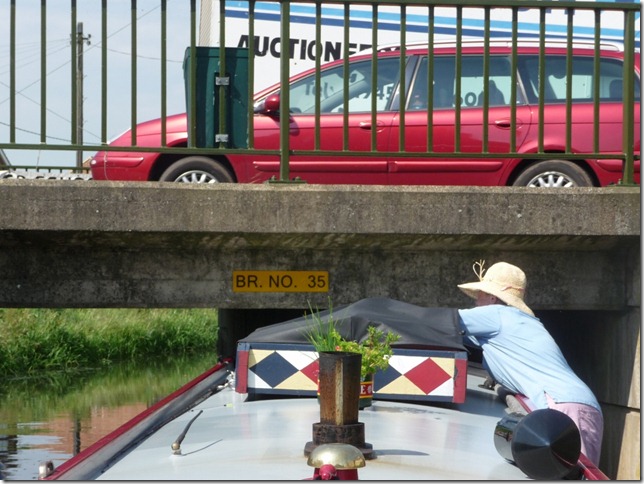 7ft would have been nice!  As the book says, several of these bridges are only 6ft above the water.

On the Basingstoke canal, the book reports “This canal is not in a good state of maintenance”

No change there then.  Oh look , a Special Note:

“A curious legal situation surrounds this waterway.  No part of it has been abandoned by Act of Parliament.  Its construction was promoted by Act of Parliament in 1778.  The original company  due to railway competition, was wound up in 1869.  In 1910, this winding up order of 1869 was found invalid, and that the responsibility for upkeep and the power to exact tolls remained vested in the ghost of the original company”  No wonder the various authorities involved today still can’t seem to get their act together.  The people responsible for upkeep have been dead for over a century!

Finally, a look at Cruising Licences on the Nationalised Waterways in 1962

Powered pleasure craft  - vessels class A over 50 ft. Annual licence £16.  Todays value based on Govt. inflation records  - £280.  Hmmm my licence costs more than double that, but at least many of the waterways are in better nick than in 1960.