Fun and games at Gravesend.

I’m sorry dear readers.  I know, I know. You’ve been pacing up and down all night, half mad with worry.  Did we perish in Dartford Creek?  I promised I would make a second post to describe the expedition and I let you down.

The truth is, we didn’t do it.  Nobody did.  What happened was, the wind got up and it was deemed unsafe by the commodore of the fleet.    On the way down river to Gravesend we passed the creek entrance, which seen on a falling tide didn’t exactly look navigable. 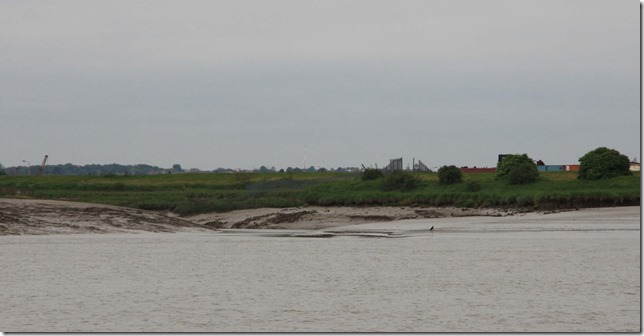 That’s it there.  That slight dip in the mud.  Even when the tide is in, you’d have to be pretty careful not to go aground.  So that’s where we didn’t go.

So what did we do?  Well, it was all great fun.  We were moored up off Gravesend, tied to the somewhat battered old tug Major who had been booked for the trip as a safety boat to pick up the bodies of anyone who drowned I suppose.  On Indigo Dream (I suppose I should remind you we were on that and not on Herbie) were five, yes five, very large greyhounds who needed a pee.  The only way ashore was to move alongside the ferry pier in the brief intervals the ferry had gone over to the other side of the river.  So when the ferry departed for Tilbury we untied from Major, shot over to the pier and one by one the huge greyhounds, about the size of small racehorses, emerged from below decks and were lifted shoulder high up to where someone on the pier could grab them and lift them to safety.  The face of the lady on the pier was a picture.  She was interested by the first couple of greyhounds and then her jaw dropped further and further as more of these huge beasts emerged from the cabin. 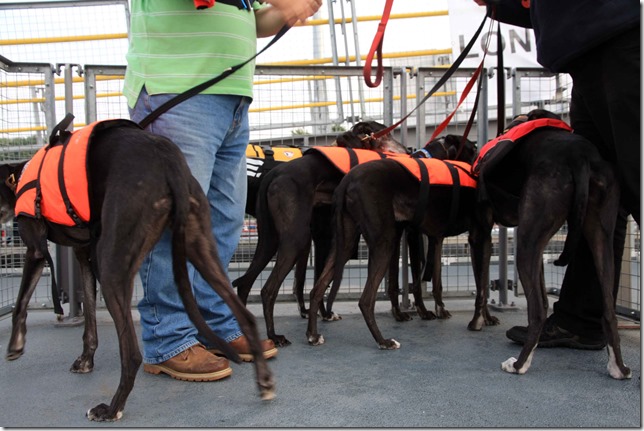 Actually they disappointingly small in this picture, but they believe you me they seem big when you are lifting one up to head height!  Anyway, once they were ashore we had to zoom back to major before the ferry man got back and shouted at us.  A simple enough procedure you might think, especially with Richard at the tiller and Indigo Dream’s powerful engine to manoeuvre us into position.  Well, anyone on the shore would have been highly entertained.  You might think that the falling tide had a steady linear pull in one direction, but it would appear that the tide hasn’t read up on laminar flow.  I lost count of how many times we circled major and made failed attempts to come alongside.  All the conventional wisdom about getting the bow rope across and tied down and then swinging the back end in just didn’t work. of course we did eventually manage it, and then we got a phone call from the shore saying  the dogs had finished their pee and were on there way back to be picked up again.

Luckily the ferry was over at the Tilbury side so we cast off from major and returned to the pier.  Then when we got there the dogs still hadn’t arrived and the ferry was starting back over.  The dogs arrived just too late, so of we went to do another n laps of Major (where n is a large positive integer) to attempt to tie up.

Then we noticed that the b----y ferry hadn’t return to the pier after all but had stopped further up stream for lunch. And so the whole process started all over again.

The rest of the afternoon was spend eating and drinking and hanging on to the boat when the washes from the ships slammed into us. One or two were on the large side! 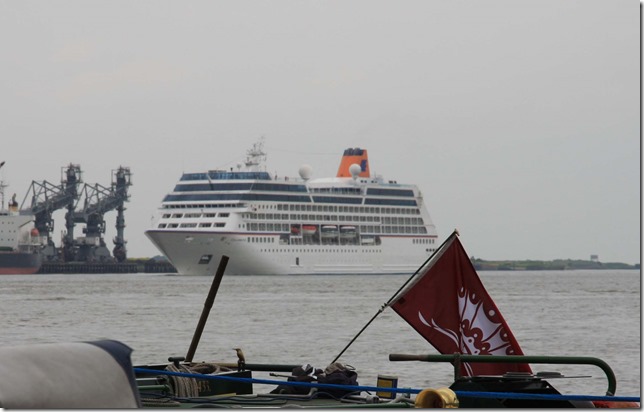 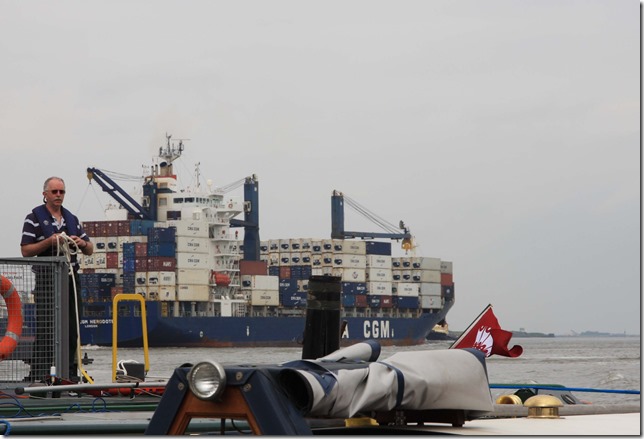 Lots more to write about and lots more pictures, but I’ll save them for next time and leave you with this image us approaching the QEII bridge

PS many thanks to Greygal who saved the day by lending me a compact flash card for my camera when I noticed I had forgotten mine.  Doh.

PPS I just noticed that Doug and James, who were part of the crew with us have done a write up and pictures of the day on their blog. Go see it.

Hilarious and precise account Neil. Lol! Great to meet you and Kath finally. Thanks for a great and memorable day

Now you've done this, the Maas and the Merwede over here will be a piece of that cake of yours :-) Sounds like you had a ball. I could well relate to the fun and games of getting dogs ashore!

It is worse - I was trying to get the stern in!