It's choc a bloc at Hawkesbury today. We're moored in the little park just down towards Coventry opposite the rather attractive Exhall Basin residential moorings. No room further up. Outside, there are thrushes pulling up worms from the grass after a shower. It would be lovely were it not for the constant roar of the motorway a few hundred yards away. I feel I ought to be writing this in capital letters so you can hear me.

We had a quiet night in Coventry basin, not a chav in sight, and the run back up to here was very pleasant. I'm still surprised that some boaters avoid this stretch. I do have to admit though that just by the footbridge about a quarter of a mile from the junction, Herbie was nearly lifted out of the water by a large submerged metallic sounding object. Is suspect it is a nuclear sub on terrorist patrol. They never tell you where they are do they? Kath thinks it's a supermarket trolley. She has no imagination.

While we were taking on water this morning a man on the towpath asked if narrowboats ever had water makers like they do on sea going boats, presumably to convert salt water into fresh. I pointed at the canal water and observed that I would take some convincing before I would drink anything made from that. I think he took the point.

Continuing our run of good luck, the weather stayed fine until we got here when the heavens opened, giving Herbie a good wash to get off the dust. We bought new wide brimmed rain hats at the Crick show recently. Maybe that's why it hasn't rained on us while we're steering.

Tonight we dined at the fab Greyhound. Very good indeed as usual, and I had my first ever taste of samphire along with monkfish tail thermidor and saffron spuds. Ooh that sounds posh doesn't it. I suppose it is, but it cost £11.95. Not too bad for posh nosh and it was delish. For those like me who have never tried samphire I can report that it is nicely crisp and crunchy and tastes much like broccoli stalks, although I might have tasted other elements had it not been in a fairly rich sauce. The beer was good too. We had a nice pint called Liberation Ale from the Channel Islands.

Now you know why the Greyhound keeps winning prizes and why we couldn't just cruise past. 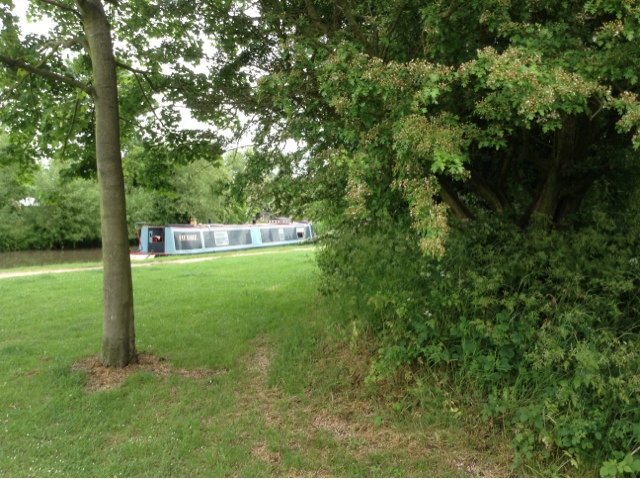 I really like this bottom photo Neil. It is all so lush and green and even the suggestion of hills makes me homesick!

I feel a change of plan regarding our return route coming on.

Had the full works at The Greyhound a couple of weeks ago - brill, as always.

Sat outside watching for boats, when three plastic cruisers came past. Thought maybe they were going to a Tupperware Party!