Why you need a lookout on the tidal Thames.

Thanks to the extraordinary generosity of Richard and Sue on Indigo Dream, we have now been out on the tidal Thames below Greenwich on a number of occasions and lived to tell the tale.  Sometimes it has been calm, sometimes it has been lumpy, sometimes the Clippers and other boats are less careful than they ought to be and send over huge bow waves to make us rock ‘n roll.  But the narrowboats seem to take it in their stride.  However there is one feature that has nearly caught out at least one of the flotilla on every occasion. 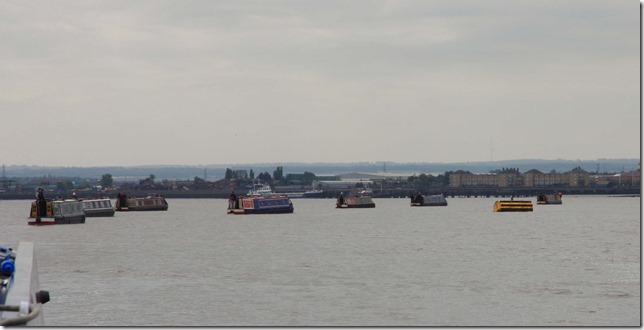 See that yellow cylindrical thing with the black bars on in?  Lets look closer at one. 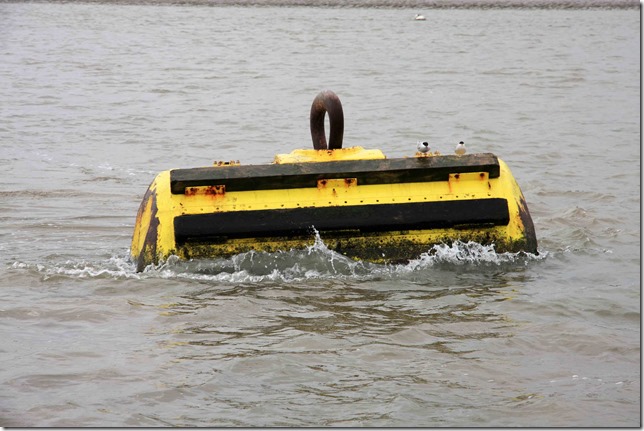 Yes, its what our friends from our transatlantic colonies call a booey, and we call a buoy.

Nothing dangerous about that, you might say. Just don’t hit it.  And there dear friends lies the rub.  For some strange reason, narrowboats seem magnetically drawn to them.  You come bowling down with the tide and you spot one of these things, so you aim away from it.  The boat turns and faces the other way, but keeps sliding inexorably sideways towards the buoy.  I suppose it’s all to do with the strength of the tide, which on the big river you don’t really notice until you turn against it.  Then just like a strong side wind it keeps pushing you sideways in its path whatever you do.  The only solution is to pile on the revs and hope your stern moves forward enough to miss the buoy.

Kath did a classic one on Saturday and missed the buoy by millimetres.  I think Richard had his hand over his eyes because he couldn't bear to look.  The rest of did though, and poor Kath was the butt of merriment for the rest of the day, not least from Doug (Nb Chance).  Still she took it in good part and was somewhat relieved when someone else at the tiller came uncomfortably close to some big barges.

We weren’t the only ones to have our moments.  Look at these two pictures of Nb Cherie.  First they just manage to get away from the buoy, (look how he has had to turn sideways on from the other boats) 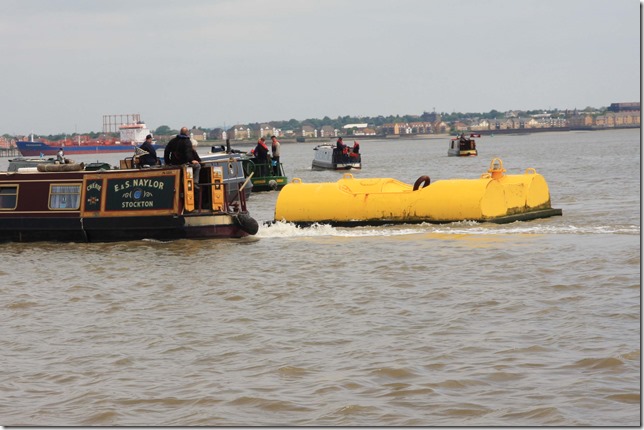 and then before he can recover his position, the big boat you can see in the distance is bearing down on him 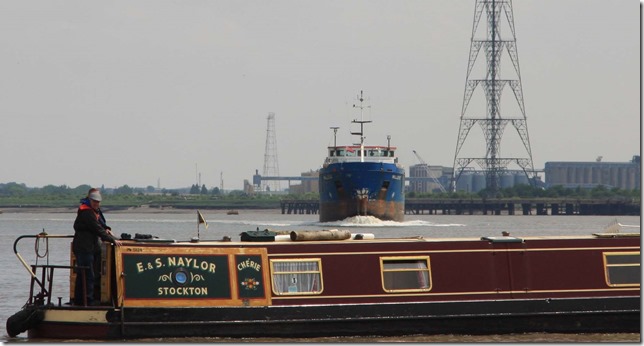 and he’s looking the other way!!

As I recall, the big boat altered course and no harm was done.

Yep that big old river has loads of space, but you can still hit things.

Wonderful posts Neil, and that photo of Cherie is amazing - not sure if they'll want to see it though!

p.s. it was a great pleasure to have your company - I hope you'll join us again though I don't know how we'll beat that trip!

Hi Neil and Kath, Great post! We shall always think of Kath when we see one of those buoys forever now! We did the honourable thing and not mention it on our blog, poor Kath had more than enough ribbing all day from us, but shes such a great sport and it could have happened to any of us. Well done for making it such a memorable trip! xx

Wonderful photos, Neil. It looks great to see so many NB's on the Thames there. Now how about bringing that fleet over here! That would be such a wonderful sight for us cloggies!

I'm sure the one I DIDN 'T hit was much bigger than that! It certainly looked it :-)
Kath