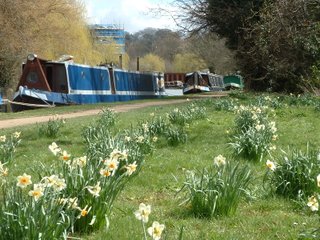 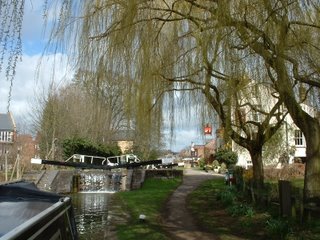 Just back from a fortnight's cruise from Iver to Milton Keynes and back -sounds exotic doesn't it! Actually this southern section of the Grand Union is pretty nice. Of course the rural bits are always fine, especially now that the springtime is emerging, but the towns are OK too. Our pics above show typical scenes in the centre of Berkhamsted.

Admittedly, we only enjoyed fine weather like that for a minority of the time. When we descended the seven locks in the Marsworth reservoirs flight it was blowing a gale! How we didn't come to grief I'll never know, the boat was all over the place.

Here's Kath preparing to go back up the flight on the way home. The trouble with Marsworth is that the pub is so far to walk from the canal as you can see here! 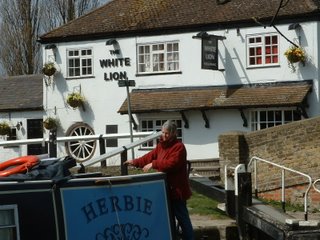 Speaking of pubs, we had highly enjoyable visits to the Cowroast Inn - a strange mixture of typical village inn, real ales, and a Thai restaurant, the Angler's Retreat at Marsworth -very friendly, good food and Tring Brewery beers, and the very modern Papermill Inn at Apsley where the food and beer(Fullers) was also on top form. I could also mention the picture postcard Globe Inn at Old Linslade where you see us moored here, 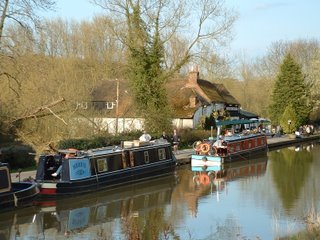 and the Fishery at Hemel Hempstead -one to revisit when we have more time.

We also got ourselves a 9 pint tin of Tring beer by walking a mile or so from the canal at Bulbourne down into Tring and to the little shop at the brewery. We've been there before and the lady recognised us as soon as we went in, "Oh hello, you're the boat people".

Whilke we were at Bulbourne we also popped in to see the people at Bulbourne dry dock where we are taking Herbie to have her bottom blacked next month. Despite being cheaper than a lot of places, they seem very good. We'll find out soon enough.

Jacob was with us for most of the first week and he did some fishing in the evenings, catching amongst other things a decent Bream. However the one that got away, a carp I think, was the biggest. The rod bent double, the fish went under the boat, and that was that!

I do hope the bird flue doesn't get embedded in our water fowl, they are so friendly to boaters and are constant companions. Lots of ducks, swans and moorhens are now builiding nests, but we only saw one batch of new ducklings, nineteen (yes nineteen) paddling furiously along behind mum. A kind kingfisher also posed on a branch for us as we passed quite nearby. Unfortunately, the camera, as ever, was not to hand.

However our most "friendly " creature was the yellow butterfly that followed us along the towpath all the way from Leighton Buzzard to Fenny Stratford, several miles!

The wildlife highlight for me though was seeing a mink on the towpath in front of me when I was walking ahead to set up Lady Capel's lock, only a couple of hundred yards from the M25. I don't think it saw me at all but pottered off into the scrub alongside the canal.

There are some amazing boats about. Is this the only canal boat with a tiled roof? (spotted at Rickmansworth) 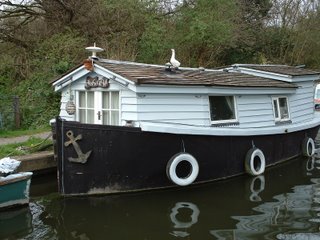 Lastly, the other thing we enjoyed was the company of other boaters we paired up with through locks, sometimes for a half day at a time. By the time you part, you have exchanged life stories!

Posted by Neil Corbett at 3:09 pm No comments:

Discretion being the better part of Valour . . .

Potential trip out cancelled this weekend because of the forecasts of strong winds. Typing this on Sunday afternoon with the wind roaring outside our house, I think we made the right decision. Next Sunday however, we are setting out on a fortnight's trip up to Milton Keynes -ish and back. Over Easter, if all goes to plan, we'll be entertaining various visitors (relatives) up there for short tips. Not many locks up there so we can just cruise and enjoy the view.

We decided the top of the boat needs a sort out, to get rid of the storage pallette which the previous owners built, and do something about the TV ariel which gets in the way. We're investigating going to free-to-air satellite which is cheap to set up, free to run, and although fiddly each time you stop for the night, is reputed to get a good signal on a small dish. All the clag on the roof has caused quite a few scratches and rusty spots, so its our first priority for painting (not counting getting the hull blacked, which we are due to get done early May at Bulbourne Dry Dock). The roof is a good place to learn the art of painting, because we'll be looking for a non slip finish rather than high gloss, which requires more skill and preparation. Anyway, we can't paint until the weather is more suitable.
Posted by Neil Corbett at 5:02 pm No comments: