Painting the Buckby can - when is enough enough?

I found a bit more time to put the second lot of roses on the Buckby can, so now it’s looking like this 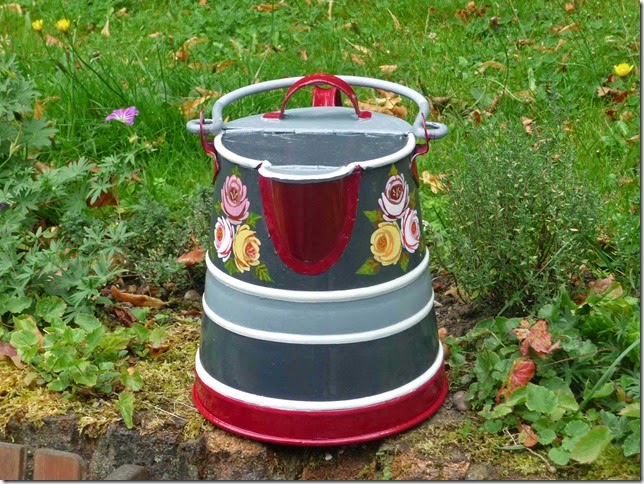 I suppose we ought to add Herbie’s name round the middle, but I was very unsure how well I could do it and what it would look like.  Then Kath had a good idea.  “Why not practice on a bit of clear plastic film then stick it on the can to see what it looks like?”.  So I did, using very simple block characters and it looked like this. 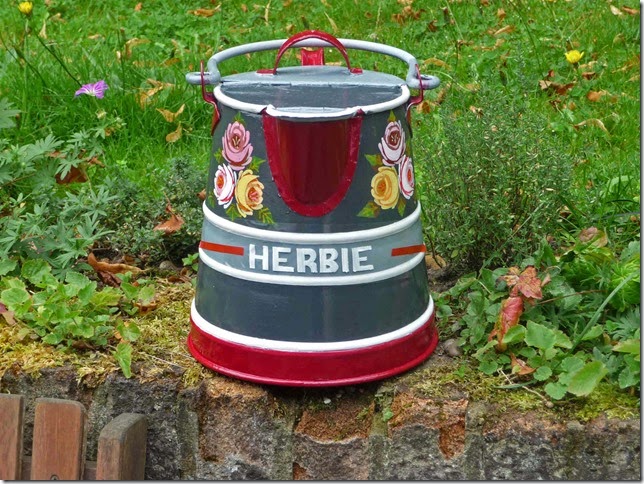 Ignore the red masking tape.  Hmm, needs more practice but it might be a runner.  Then the next question is, should I go on and paint more flowers on the rest of the can, or leave it like it is?  The traddy thing to do would be to cover the whole thing in decoration, but we quite like it as it is.  Maybe I should get some more plastic film and try out a row of roses along the lower grey band.

At the July meeting of the Volunteer London towpath rangers we gave poor old Dick Vincent, our CRT leader a bit of a hard time, grumbling about lack of progress on a number of things on the towpath that needed fixing. Well yesterday we had our August meeting and I'm glad to say things are looking up a little bit.

Firstly rubbish bin collections. We have been complaining for a while that every time we come across a bin, it's full to overflowing and there is often a load more rubbish lying round the bin. National contractors Fountains are paid to empty these bins, and in London they are supposed to do them very regularly. Suspicions were that they were failing to maintain the schedule. Now we hear that our evidence prompted CRT to withdraw payments from the contractors until the collections were done properly and hey presto all of a sudden the bins are getting emptied more regularly and now when you find one it has space in it for your crisp packet.

We're also making progress on moves to require canal side businesses to keep their advertising A boards clear of the foot /cycle way in order to prevent accidental collisions. Once we get the rules set up, boards will have to be authorised and comply with positioning requirements or else be removed. On a more difficult front we're working on ideas to keep illegal motorcyclists off the towpath - a particular problem in the Cowley / Slough Arm area. Next week were having an on site look at the possibilities for suitable barriers.

More news I picked up at the meeting.

There is a lot less floating rubbish in the Regent's Canal lately thanks to Richard one of our volunteers and the London Boaters Group who have acquired a small boat which patrols the area regularly scooping up the rubbish.

Some people who have been living in tents on the towpath in the St Pancras area have been the subject of a long effort to get them relocated. CRT have done a lot to help them find alternative accommodation but the alternatives found have been refused by the campers. As a last resort CRT went to court this week and secured an order to remove them and prevent them from returning. Things like this are going to keep happening as long as Uncle Boris and co continue to tolerate the housing catastrophe in London. Property prices and rents are way beyond anything normal people can contemplate. No wonder the canal is filling up with live aboard boats. All this is not good for people wanting to visit the capital by boat, but CRT's recent rethink on mooring might work to help visiting boats and passers through. They are identifying a number of short stay sites and seem to be resolved to enforce the maximum stay times at these spots. We'll have to see how it works. One good sign is that yesterday there were five or six empty spaces in Paddington basin!

On the way home from the meeting I picked up a copy of the Evening Standard which included a letter from a lady whose deaf husband was regularly terrified by careless cyclists speeding along the towpath on the Regents Canal. We still have much to do.

Posted with Blogsy
Posted by Neil Corbett at 6:26 pm 2 comments:

You can only practice so many times before you attempt something for real so this afternoon I bit the bullet and put the first roses on my buckby can. 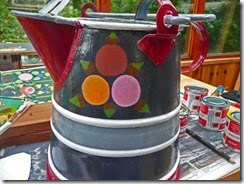 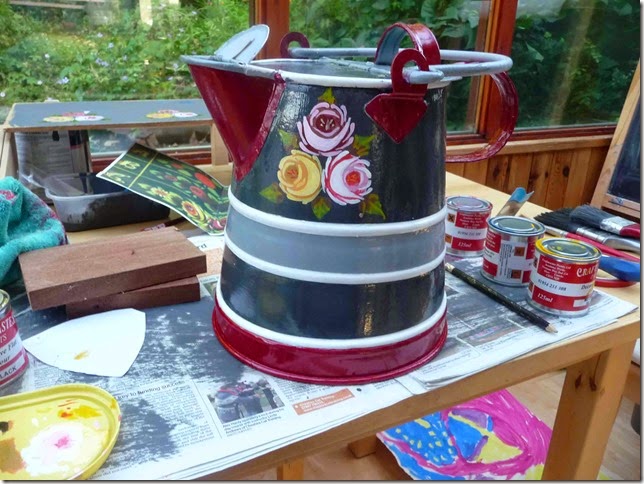 Could be better but these roses are usually best seen from a distance so I guess they’ll do.  I now have to go through the agony all over again on the other side of the spout.

Is this a record?

Hello, it’s me again.  This might be the longest gap in these Herbie blog posts since I started in 2006!  Well, I’ve been busy and to prove it here are some photos of what I’ve been up to over the summer break.

We went from the Pontcysyllte aqueduct to the Slough arm in three days! Alright, not by boat, but we did it.  While we were in Shropshire camping we took Jacob and Grace out to Llangollen to see the sights.  When we got to the aqueduct Kath and Jacob got a fit of the jitters and declined to walk across so I walked over with Grace who seems to have no fear of such tremendous heights.  in fact she enjoyed it. 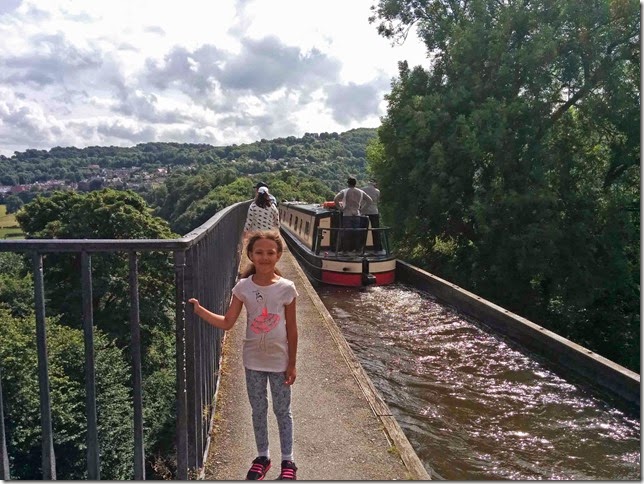 By car it’s only a few minutes to the Chirk aqueduct so we did that one too. 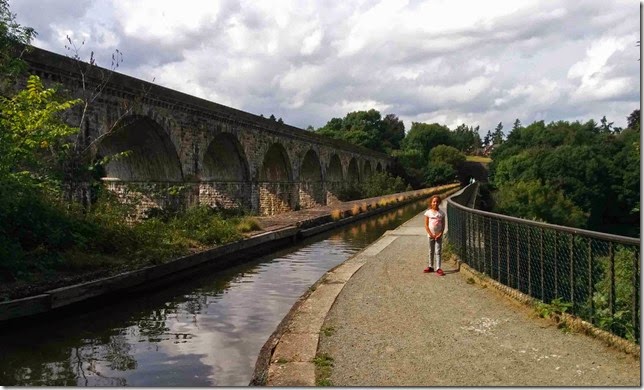 That was on the Thursday.  On the Sunday we were back home and knowing that Adam was bringing Briar Rose to High Line yachting on the dear old Slough Arm we hitched a ride from West Drayton to help down the arm if the weed proved too much.  Actually there was next to none, save for some encroachment of floating pennywort here and there. Stupidly I took no photos to prove it.

Back at home I have not been entirely idle.  Progress on the Buckby Can painting is slow but there is some.  Here is where we’re at. 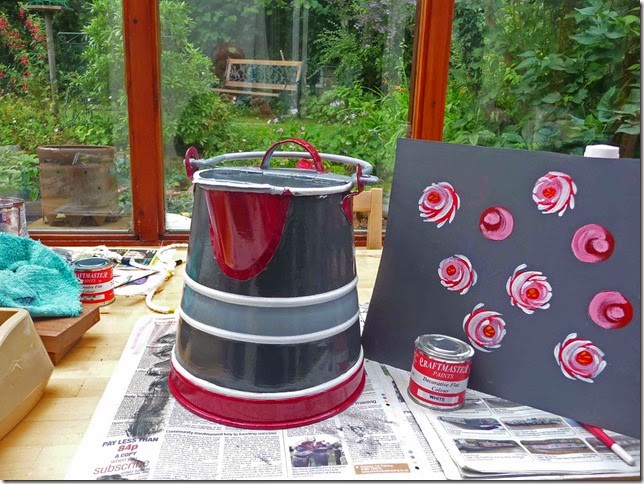 You can see I am practicing painting traditional canal roses.  They’re coming along but I don’t feel ready to assault the can with them yet.   On the canal skills front, I’m also trying to get skilled at rope splicing with the help of a very good iPad app called Grog Knots, highly recommended, it shows animations of all types of knots and stuff and also has very good notes on applications and pros and cons of different knots.  In particular it shows eye splices from a different point of view than all others I have seen.  Here are a couple of my attempts. I need to get better but they sure are strong enough. 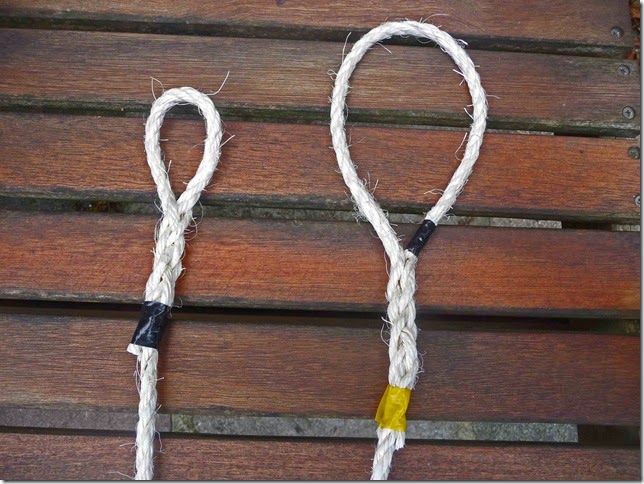 My rather basic woodworking skills could always do with improvement but I have managed this summer to make a shallow wooden box to hold our cruising tackle – windlasses and mooring gear, so they are ready to hand. The box also has the benefit of raising Herbie’s deck seats to a better sitting height.  Stupidly I have also forgotten to take a picture of it but it now rests aboard Herbie and seems to work. I’ll take a picture next time we’re aboard.

Still at home I have been relearning how to play guitar. After forty years of honing my acoustic guitar skills it seems that there is a whole lot of new stuff to learn when you go electric, so I am deep into practicing pentatonic blues scales and the like as well as a very undertaking a revealing scrutiny of how Jimi Hendrix played what he did.  It soon becomes obvious that he had done his musical homework.

More camping last week and off we went towing our trusty Dandy camper, seen here through the awning at night. Ours is now eighteen years old, and this miracle of British ingenuity is till going very strong and keeps us comfortable and warm and dry in any weather. 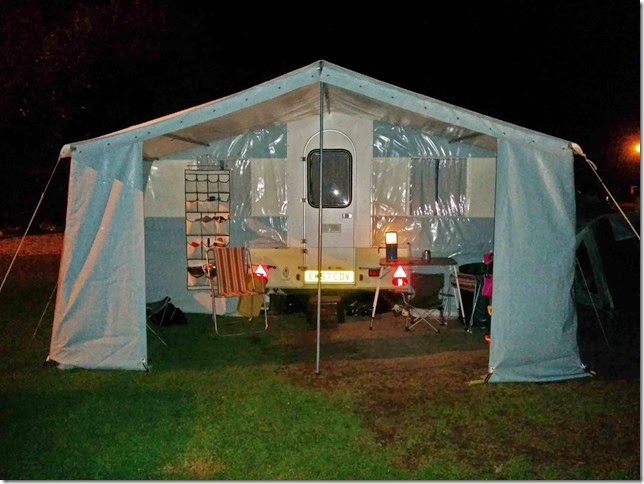 Here’s where we went 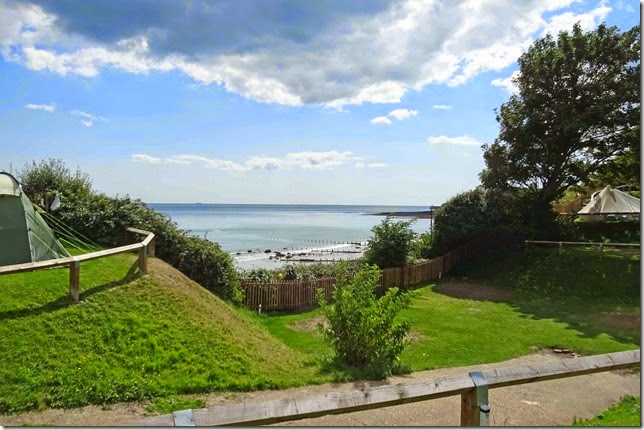 This is the view from the Dandy door.  We were at the Warren just round the corner from Folkestone at the foot of the white cliffs.  Folkestone town has little to commend it but the campsite is great and the little beach below is quiet and good for swimming and stuff.  We still managed to fit in a sort of canal fix because not far away is the Royal Military Canal which winds around Romney Marsh.  It was dug to prevent a successful landing by Napoleon and the half a million (yes he did have that many) soldiers in his gang.  If it came to the crunch the plan was to flood Romney marsh to bog Boney down.  Here is the canal seen from the rather splendid Port Lympne wild animal park. 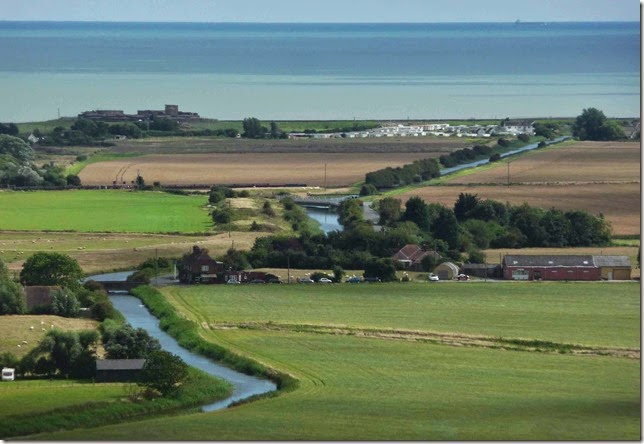 That’s sea at the top.

The animal park is especially good for watching Gorillas like this one doing an imitation of me in contemplative mood.  Despite the fact that this one happens to be sitting by a fence, they do have acres of room to wander about and lots of stuff to play with. 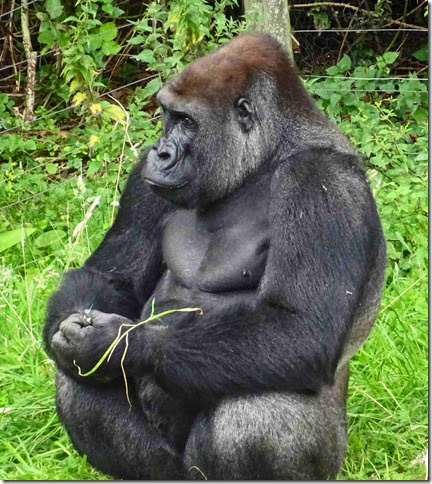 The likeness is quite striking.

So you see we have not been doing much boating but we have been enjoying the summer and still have lots lined up over the coming month. In late September and early October we’re planning a longish Herbie expedition taking in the Banbury canal day.  I might get that can finished by then.