Getting it over with

How long after your boat is blacked is it ok to pick up the first scratch? My usual mantra is "As long as I can get out of the boatyard / marina unscathed, then what happens after that is just inevitable and not worth worrying about."  Well you'll be tickled to know that this time I didn't even get that far.

After admiring the spiffing job done on Herbie (the gunnels are a sight to behold, you could read a book in the reflections) by Andy at Cropredy dry dock we were feeling pretty smart as we tootled a hundred yards or so over to the service pontoon to fill up with diesel.  Now I've done that manoeuvre many times before and this time there was not even a puff of wind, but I managed to cock it up in fine style and nudged the corner of the pontoon and put a flippin' smudge on Herbie's pristine bow.  Is this a record?  Can anybody beat that? Ah well, at least that got scratch 1 over with, after that I could relax.  I've dug out a tin of Intertuf 16 touch up I've been saving for just such an occasion so when it stops raining I'll attempt a restoration.

So here we are on day 1 of our autumn cruise, having reached Banbury where we wait out the rain.   We've done four locks without losing a windlass and I only had to go down the weedhatch once, so I reckon that's pretty good going for starters. Banbury canalside currently has a big hole full of diggers and big bits of pipe where a multi storey car park used to be, and the green footbridge across the canal has disappeared.  Some mooring spaces have been lost in the process, but it's only temporary  and we still found somewhere so that's alright.

The canal is surprisingly busy for the time of year and the usual banter with fellow boaters using the locks made our first morning a pleasant one.  Our friends a slat mill lock popped their heads over the wall to say 'bon voyage'. 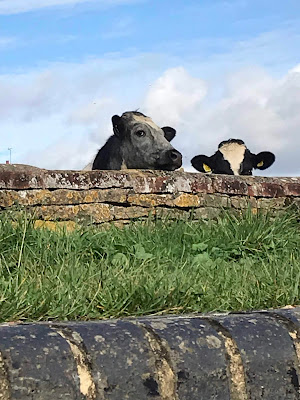 Malc of 'Malc and Dink' fame on the outskirts of Banbury gave us a cheery wave as we passed his cottage and all is well with the world.
Posted by Herbie Neil at 2:27 pm 3 comments:

Preparing for the worst

Where is Michael Gove when you need him?  We (that's me and Kath) need to prepare ourselves for stormy weather, shortages of supplies and all that stuff.  Unlike Michael's boss, our  alarmingly coiffured PM however,  we'll try to moderate our language as we negotiate the trials ahead.  Our deadline is rather shorter than his as we intend to raise anchor (Ok untie the mooring ropes) on Monday morning and head southwards.

Just like the B word however, the omens are not encouraging.  Never before have I hoped so much that the 'experts' aka the met office, have got it wrong, but we'll see.  Our strategy is to not worry about our destination, but to rest up and enjoy ourselves when the weather is against us.  Accordingly I intend to push on with some sketching and possibly painting.  Kath as made for me a lovely sketch book.  Here's the book with an alarmingly accurate portrayal of myself on the cover.  If you look closely you can see that the picture is entirely in stitch.  Kath often has me in stitches. 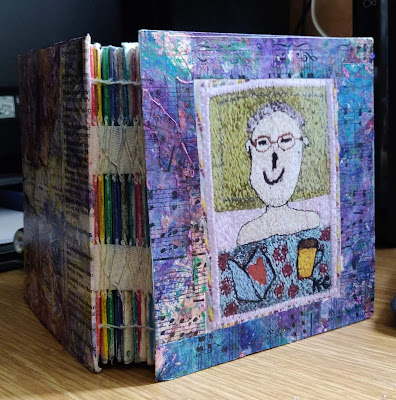 Inside the book, interspersed among the blank pages, all of nice bits of paper of various sorts are old scraps of this and that which may or may not act as inspiration, or more likely a distraction from my poor sketches.  This one's a bit of a tune we like to play. 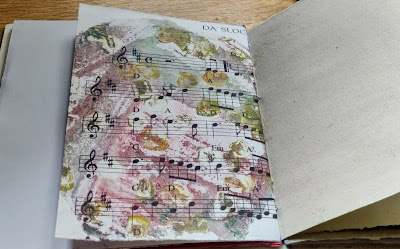 This next one is a lino cut print by Kath. 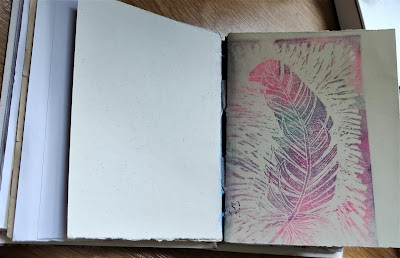 It's all a bit daunting really because I don't want to spoil it all with crappy sketches, so I'm going to have to try hard.  Wish me luck.

The curse of the Herbies

When we used to moor down the Slough arm we got a reputation for always going out in bad weather  It was the cause of some amusement to the other moorers when the weather always changed for the worse as soon as we set off.  The curse of the Herbies they might have called it.