You might think that in all the recent hot weather, Herbie would be overflowing with solar energy, but sod's law being what it is, that ain't strictly true.

Problem one: Solar panels lose efficiency when they get very hot.  At least I ensured a couple of inches air gap under ours.  I can't think how people get on with those that are stuck to the roof.  You could have fried an egg on Herbie's roof last week.

Problem two:  In very hot weather, the fridge has to work extra hard, and as the fridge is the main consumer of electricity on our boat I imagine is might have been using at least double the amount of juice during last week's hot spell.

Problem three: Sod's law bites again.  From our Smartgauge readings It looks like our domestic batteries are on their way out, and as bad luck would have it they are just out of their four year warranty.  Clever design or what? No doubt we could continue with them for a bit, and no doubt only one of the three is beginning to fail, but you really need to have all three changed at once or the old ones drag the new one down.  Our previous Numax ones lasted five years, so these I bought from the (ex) Canal Shop at Hillmorton haven't been so good.  These days you can get batteries with a five year warranty.  I found some 135 amp hour ones that would fit in the tight space we have.  They're taller than ones we've had previously, but we have the headroom so I fancy getting those.  Of course they cost a bit more but the extra capacity and the longer life  (600 cycles) would pay off I reckon.  According to the blurb, you can take 70% out of them without harm, but I wouldn't.  I never like to take out more than we can comfortably put back in in a few hours cruise.  In case anyone is interested, here's a link to the ones I'm looking at.
Posted by Herbie Neil at 9:14 am 3 comments:

Here we are at Belchers Bridge near Aynho with our bellies full of posh nosh from the Great Western Arms where the food and service was as top notch as usual and the beer not bad either.  It's a good job we can't afford to eat like that every day or we'd be even more portly that we already are. 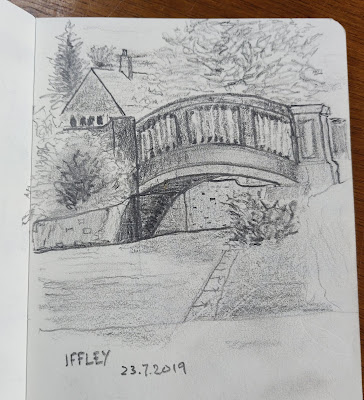 which is a sketch I forgot to add to the post when we were in Iffley.  People who know the area might recognise it.  Kath and Peter are always sketching or painting something so it inspires me to have a go.

Today we stopped for an all too brief chinwag with Bones as we came through Heyford. I don't know where she gets her energy from, always doing two jobs at once and thinking about another.  I might have been like it her age I suppose, but it's too long ago to remember.

Today I refrained from using our new ratchet windlass on the top paddles at Somerton deep lock, even my old 'unbreakable' standard windlass felt like it was going to break.  I can honestly say that these are the stiffest paddles I have ever operated.  I wouldn't be at all surprised to learn that some folk couldn't turn them at all.  I came close to giving up. Come on CRT, sort 'em out please.

Herbie in the heat

Aah, the peace of the countryside, well except for the railway 20 yards behind the hedge and the combine harvester roaring away on the other bank and the fact that we appear to be directly beneath the flight path from somewhere to somewhere else. My crew skulks in the bushes to avoid the sun while I sit patiently waiting to be struck by lightning or at least to have a stricken tree fall on us. We are out of the burning sun, but the air is thick and heavy and the breeze is like that from a fan heater.  Actually the coolest place is inside Herbie. Even though she is basically a tin box, her insulation keeps her remarkably cool.

We were heading for Heyford today but gave up in the heat with only a mile or so to go.  A sort of Captain Scott in reverse.

Our jolly up and down the Thames was lovely.  After a night on the canal down the Hythe bridge arm we collected our Peter and tootled down to Abingdon, dodging the rowers who, because they do it backwards, are a constant hazard until you get past Iffley.  Not only can they not see you, they creep up fast behind you so you don't see them.  I think the EA should loan out wing mirrors with their visitor licences.

Abingdon, as you all know, is lovely, and we tied up below the bridge and shambled over to the Nag's Head where we ate expensive Fish and Chips on the island.  The view is what you pay for.  Next night we went back to Iffley on the 'first night free' lock moorings and ate out again, this time at the Isis Farmhouse.  I can see while some of my faithful readers have mixed feelings about it.  It is a bit gloomy inside, but the beer is very good and the watermelon, olive and feta salad I ate in the garden was perfect for a hot day.

We returned to the canal via the beautiful Port meadow where the river is full of paddling cows, horses and dogs, and up the rather scruffier Dukes Cut, pressing on in the heat to The Jolly Boatman moorings at Thrupp where we found a shady spot and self catered (sorry Jolly).  En route we met Maffi and Molly hiding Dracula like from the daylight below a lock.  Kindly we allowed him to help us through the lock, we're all heart. All was fine in the evening apart from a wasp stinging me in the finger, right on a bony bit.  Today it itches like mad, but I expect I'll live.

If we survive the seemingly inevitable electric storms tonight we are treating ourselves to posh nosh at the Great Western tomorrow. Virtue has its own reward.
Posted by Herbie Neil at 2:27 pm 2 comments:

At least the EA is confused as well.

Well the EA might know what their mooring rules are for the Thames, but their lock keepers don't seem so sure.  Here's what I learned today,

Had we moored on the other side of Kings lock, it would have cost us £5 instead of £7.50, except that the £7.50 should have been a tenner as Herbie is longer than 40ft.  The lockie says he assumes all narrowboats are 40ft bless him.

The field with the abbey(?) ruin by Godstow lock is not EA and has separate charges but first night is free.

East street moorings are overseen by the lockie at Osney lock and first night is free.There are no signs telling you that. Next 2 nights are £5 each then please bugger off. You can come back and start again after one night away.  When asked about Iffley lock he didn't know.

There is a pukka sign at Iffley lock (hooray) saying first night free, then 2 nights at £5 and £25 a night thereafter.

Tonight we moor a couple of hundred yards above Iffley where I assume it is free until someone tells us otherwise. 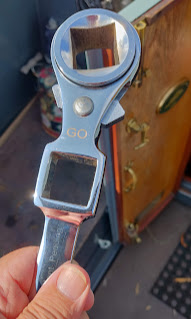 was it worth it?  Yeah I think so.  It works well and is hardly heavier than our regular ones.  Here's a picture comparing them for size. 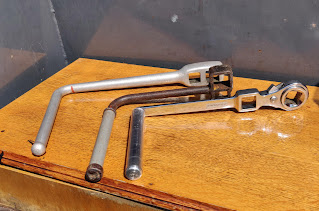 My only reservation is that as the handle is rivetted on rather than just a bend, that makes a potential weak point. I feared for it on the top paddles at Somerton deep, but as they are the stiffest paddles I've ever had the misfortune to wind and the windlass survived, it scraped through the ultimate test.  Using the ratchet is a breeze and makes the job a lot easier on difficult paddles.

Now onto bridge names.  Sorry Sue, you were wide of the mark on dentist (230 -geddit?) and Luxembourg (208, surely you're old enough to remember that!). 76 is of course Trombone.  I'm no better, Jim has me foxed on "cowboy time" -see comment on previous post. 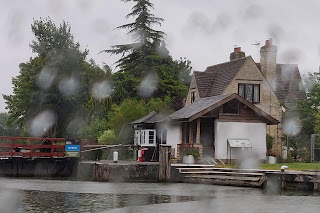 I don't know which is getting stiffer faster these days, lock paddle gear or my back.  Most likely the one is the cause of the other I suppose. Anyhow I seem more often to strain what muscle I've got left when winding up some of the stiffer paddles  down our way.  So after consulting with my co-pilot we've agreed to splash out what seems a lorra lorra dosh on one of those Gowindlass ratchet windlasses.  They seem a good bit smaller and lighter than the other one on the market (a bit less expensive too).  The clinching argument is that we're not getting any younger so if it works it'll become more essential as time goes on. Ours is in the post and assuming it gets here in time we'll test it when we to get a bit of boating in next week so I'll let you know how well it works.  If it saves me from pulled muscles it'll be worth it.

Following on from my recent posts about gate hopping (which most of my brave readers seem to do despite CRT's advice to the contrary) I'm going to try an experiment to see if I can avoid the need.  The idea is to have a length of rope with a biggish fixed loop on one end which you drop over the free end of a lock gate before you push or kick  it open from the other gate.  Then you open the gate your side and the boat comes in or out, you shut your gate, then pull the far one shut with the rope.  I'm a bit surprised I've never seen anyone do it.  Perhaps because it doesn't work.  Anyway I'm going to give it a shot and see how I get on.  I'll probably strain my back and you can all have a laugh.
Posted by Herbie Neil at 5:21 pm 4 comments: