The Boat Inn at Stockton - pros and cons

We've been a bit wary of going to the Boat pub ( sorry, Restaurant and Bar) at the top of Stockton locks because of its reputation for being expensive.  Anyway we're moored ten minutes walk away so we thought we'd better go and have a look on behalf of the reader of this blog. Just imagine I'm Jay Rayner or (heaven forbid) Gregg Wallace.

Some of you will know the Boat.  It sits canalside with some pergolas to sit under.  You can moor right outside if there's room.

If you should care to examine their web pages you would expect it to be smart and up market, which it could easily be.  Clearly money has been spend on doing up the large garden at the rear with a nice covered decking area and a little "zen" pond and whatnot.  There is plenty of seating and even a pile of cushions by the back door so you can grab one to use on any of the outdoor seating.  So far, so good.  However the garden right now is looking a bit tired and neglected

and I'm sorry to say that both out front and somewhat less so at the back there is a distinct whiff from what I fear is their septic tank.  Maybe it's overdue for emptying.  Whatever, it makes the attractive canalside seats an unpleasant spot to drink or eat in.  Another example I think of the website promising rather more than the real thing.

Inside the pub is a tad more traditional and there are a number of dining areas as well as a comfy bar.

Well we were pleasantly surprised at the drink. Their main beer supplier seems to be Suffolk's Nethergate brewery which is a good 'un.  We had pints of Nethergate Venture, very acceptable and well kept and served and at only £4.40 a pint, good value by today's standards.  They also had a few of the excellent Lilley's draft ciders available again at a reasonable price.

Now, we'd seen the menu on line and knew that it was not cheap.  Starters between £9 and £16. Main courses will set you back anything between £18 and £34  ( a side dish of chips £4.50), desserts mostly a tenner etc, but the food does look good.  However we didn't expect the high food prices to be reflected in the price of a packet of crisps £1.75!!

We declined to dine on this occasion but may go back sometime to treat ourselves.  I think Jay Rayner actually eats the food when he goes to these places, but then it's on expenses.

Should you ever go there, you might also want to walk across the road where a gate leads you to Tinkers Meadow, a Wildlife Trust managed meadow which, in season, promises abundant wild flowers and a number of rare species of butterfly.  What it did have today were some nice ripe juicy blackberries which this year seem not so easy to find on the towpath.

For the second time in 6 months, no wait, 8 months, (times flies) we're prevented from going home.  Banished! Locked out of our own gaff! Last time it was because Jacob was staying in our house and he had got Covid and this time it's because our Claire's partner Gary is refurbing our loo/shower downstairs and had found a leak in the soil pipe and the wall was wet when he took the old tiles off and so he had to reline the walls and the job is taking longer and there is no water in the house because it had to be turned off because of all the disconnected pipes.  Did you get all that? He hopes we can go home on Monday.  Ah well it's just as well we can stay on Herbie isn't it?

We'll just tootle up the canal a bit (no locks) and potter about doing little jobs I suppose.  There are plenty of them to do on Herbie.

Up the end of the marina where we used to moor the dreaded blanket weed seems to be thriving. I think it's shallower up there.

Lucky we moved to our present berth then, because the water is clear here.  Blanket weed is a real pest.  When we used to more down the dear old Slough arm it became nigh on impassable in August.  Five yards and the prop would be clogged with green cotton wool. You'd be lucky to get out of the arm without going down the weed hatch several times.

Yesterday I was driving the car and got caught in a downpour which caused a flash flood.  Quite terrifying how quickly the road flooded. Of course not much of it ended up in reservoirs so the current batch of lock restrictions looks like staying for quite a while.

One of Herbie's fluorescent lights failed today, so I'm going to buy 5 metres of 12v sticky backed LED strip    (£6.99) and replace all the tubes in all the fluorescent light fittings (7 I think we have.  We don't use them much, preferring to use the little LED spotlights). What can possibly go wrong?  I expect something will  but a 6.99 it's worth a punt. Of course the main thing is that a boat's 12v circuit is rarely if ever really at 12v. I start panicking when it drops to  12.4.  When we're cruising the alternator gets up to 14.4 or more, but in the evening we we use the lights we're normally down to 13 or less. We did the spotlights with LEDs years ago and they've been fine.  I'll either be able to do a triumphant blog post about it or you can enjoy the schadenfreude when I describe how it all went wrong or the leds overheat and fail after three weeks.  It's always the bad news that sells the papers.

Goodness, I just noticed it's 7 minutes past midnight.  Sorry to keep you up so late.

Anyone walking the GU towpath between Calcutt and, say, Leamington.  Will come across a number of examples of this:

Generally found two or three feet back from the water's edge these bits of sheet piling crop up quite often on this stretch of canal.  You have to suppose one of two things to explain it.

a) The canal used to be wider and this is where the old edge was, or

b)  These were driven in to secure the inland edge of the tie rods you sometimes see keeping the newer piling from leaning into the water.

So maybe the canal really was two or three feet wider.  Strange though as this stretch of canal is still quite wide today.

Can anyone enlighten us?

Sorry folks, we snuck out on Herbie without telling you. Well the phone/internet signal was too poor to post pictures and anyway we were busy having fun.  Now we're back on line I can reveal all.

We went down to Warwick and back with our son Peter and here are some of the things we learned.

One good turn deserves a lot of others:

Many of you will know the big Grand Union locks north of Wigrams turn with their imposing looking paddle gear. You might also have counted how many turns of the windlass it takes to open them up.  Most times it's about 21. However there's one set that takes 50 turns.  At Bascote staircase lock.  Here's Herbie in the bottom half while I stand up by the paddle that lets the water from the top half into the bottom.

I was busy winding up the paddle thinking "Hang on, I'm sure this has gone more than 21 turns", and it kept on going, and going!  So when it came time to close the paddle again, I counted, and sure enough it was 50 or 51 turns.

Here you see the view from the bottom lock looking up.

Well there's deep water behind those gates and the paddles in these locks let the water in from underneath, so they're pretty deep and hold back a lot of water pressure.  I'm guessing that's why those middle paddles are so low geared.  The paddle itself doesn't rise any more than others, so that can't be the reason for all those turns.

Down near Wood Lock the work on HS2 is all too plain to see.  They've built a conveyor belt bridge over the canal which appears to be shifting soil or ballast of something from one side to the other.

As I walked along the towpath beneath, I could hear the rumbling above and see the stuff spilling off the far end.

You might also have read a week or so ago that one of their tunnel boring machines has completed its bore beneath Itchington Wood not far away.  It's not hard to see where all the money is going.
There are some Eco land owners left:
Further down the canal just before you get to Radford Semele there is a lovely stretch of good mooring alongside a wood.  We moored there both going down and on the way back.

One night a lady walked past and introduced herself as the owner of the wood.  She is managing it carefully to improve its ecology whilst making it available for boaters to enjoy.  She's created small clearings where she said boaters are welcome to sit and have a barbecue. Not only that she's encouraged people to create bits of art work in the wood. 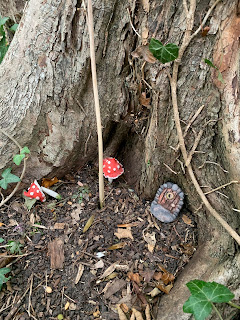 Here's view from inside one of the clearings with Herbie moored just outside.

See the fire pit?  Here's a closer look where you can see she's carefully lined it with pebbles. 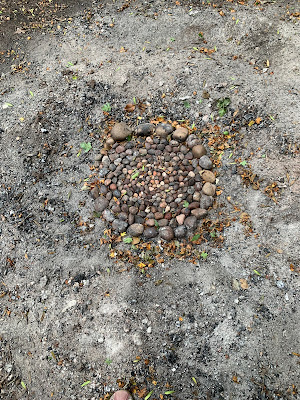 Posh or not so posh:
Beyond Radford Semele you get to Royal Leamington Spa.  That sounds posh doesn't it?  Well bits of it may well be but not by the canal it ain't.  Here's a typical view.

It's OK but not posh.  In the past I've read of people advising not to moor overnight in Leamington.  I think you'd be ok if the pick the right spot.  On the upside there is a really good mooring adjacent to Lidl on the Warwick side of town.
Leamington appears to be divided from Warwick by the river Avon, or should I say a river Avon since there are quite a few of them in England?  No, I think I should say The Avon as it is the proper Shakespeare's one  ( and 'when I were a lad' I would cross it every day on the way to school in Evesham.)  An aqueduct carries the canal over it as you enter Warwick.

Hoping for a good pub
Lastly we wanted to sample the delights of the Cape of Good Hope pub in Warwick.  People have been extolling it's virtues to me for some time so it had to be explored.

Hmmm, well it's fine, but it ain't no Greyhound.  It's a decent pubby pub with good beer and standardish pub grub (although Peter did have moules frites).  I suspect part of it's appeal is that it is the first pub met by those who have just descended the gruelling Hatton flight.
And so we turned round outside the Saltisford arm and did it all again in the opposite direction.  22 locks each way, which at our age and condition  is quite enough for a week's trip, especially these big hefty ones.
More observations later.
Posted by Herbie Neil at 11:40 am 2 comments: