Light at the end of the tunnel?

We boaters know all about light at the end of tunnels.  It's often further away than it looks.  However CRT's latest update talks non specifically about the reopening of navigation in the not too distant future.  My guess is mid April.

The CRT update also has a large piece on composting toilets, or the disposal of the contents thereof.  There must be quite a few boats out there now with these toilets (we love ours), and so the question of disposal of the solid contents is becoming an issue.  To keep a long story short, CRT doesn't want our poo and is instructing us not to put the bagged compost into their waste bins.  Now for us, that's not a problem because we bag ours up and keep it in the gas locker until we go home, then take it home with us where it completes its composting safely and odorlessly in a corner of the garden.  Sometimes in warm weather it hardly needs it, having already broken down in situ ( or should that be in sit on?).  Liveaboards however are going to be scratching their heads.  I don't know what the answer is, but it's a pity that a home can't be found for this chemical free waste.  Ironically, we are still allowed to put used nappies in the waste bins, so perhaps liveaboard boaters will take to wearing  adult size nappies.  Maybe not. As it happens, we do keep a few nappies on board because they're brilliant for soaking up rainwater in the bilge.

I see Crick Boat Show is going virtual this year.  Tickets are free and there will be videos and talks and such like on line, and I suppose a large amount of advertising.  Will Adam be doing virtual boat reviews I wonder?

In other news, our patio gazebo fell prey to the gales this week.  I have a pile of canvas, poles and broken plastic joints to sort out in calmer weather.   Meanwhile . .

Were you a fan of the Fast Show? I was, and I particularly liked the bit where Mark Williams would emerge from his shed and announce what he would be mostly wearing or eating this week. "This week I'll be mostly eating Yoggut."  You may or may not know that Mark (lately starring in Father Brown) was once a member of Mikron Theatre and travelled the canals as they do each year.  Anyway I digress.  It's just a way of introducing what I'm up to lately.

This week I have mostly been inventing a P Pod, or it might be a Pi Pod.  Anyhow I've made a little prototype  gubbins that plays abc tunes.  Abc is a format for notating simple tunes in text format, and is widely used by folk musicians in particular.  On the web you can find more than 160,000 such tunes,(!) looking a bit like this.

M: 4/4
L: 1/8
K: Edor
|:E2BE dEBE|E2BE AFDF|E2BE dEBE|BABc dAFD:|
d2fd c2ec|defg afge|d2fd c2ec|BABc dAFA|
d2fd c2ec|defg afge|afge fdec|BABc dAFD|
You need a bit of software to translate and play it but it works really well.  I thought it would be fun to write my own player software and make a little IPod type device that could hold a collection of these tunes and play them, and it was a chance to make use of the amazing little Raspberry Pi Pico device (price £3.80) that was released a few weeks back.  So a mixture of electronics and coding for me to wrestle with.  Well it passes the time. 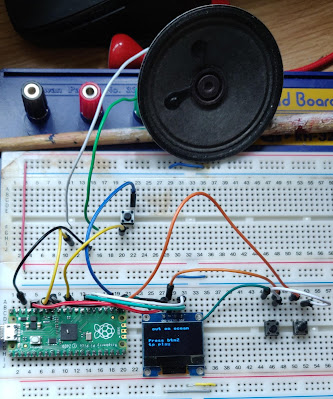 I haven't yet mastered the playing of some of the more complex tune features, but simple ones like that one above I've got nailed and two little buttons  let you scroll through the tune list and select and play the tunes . The little Pico holds all the code and potentially hundreds of tunes and could run off three AA batteries.  Total cost about two cups of Costa Coffee plus whatever box  I can make to put it in.  I reckon I could fit it all into a Cooks Matches box. Ok I admit it, I'm an anorak, but it keeps me off the streets.
Next week I shall mostly be trying to work out why my code can't play triplets properly.  I'll get there.
Might see you soon on the canal.  Wouldn't that be nice?
Posted by Herbie Neil at 12:22 pm 1 comment:

Two boats on cardboard and in felt

How are you off for cardboard boxes?  We've been collecting them at an alarming rate since lockdown has driven us to buying loads of stuff on line.  Our son Peter who seems to alight upon all sorts of weird things on You Tube led us to some mad person building a full size 3d replica of a Ferrari F1 car out of cardboard (that one has had 8 million views!), and another bloke making a working coin operated bubble gum dispenser out of cardboard.  Inspiring stuff.  So I looked at all our cardboard and decided to start simple, and I had the perfect project.

I'm a big fan of the Cornish artist, the late Alfred Wallis (put him into Google and select Images and you might see why). Dear old Alfred was a simple and humble man.  After a working life on fishing boats (many of them sailing boats) he spend his retirement in his little cottage in St Ives painting what he knew, boats, and harbours.  Alfred couldn't afford posh oil paints and canvases so he used what he had, tins of old household paint and bits of carboard.

Ah, you say, Neil's going to do a painting on cardboard with leftover boat paint.  Oh no I'm not, well not yet anyway. You see I already have a Wallis picture, or rather a super copy made not with paint but with felted wool courtesy of our Peter who is dab had at making objects and pictures from handfuls of wool which he jabs and punches with a barbed needle.  He's brilliant at it.  for Christmas he made me a computer  -  a good old Sinclair Spectrum 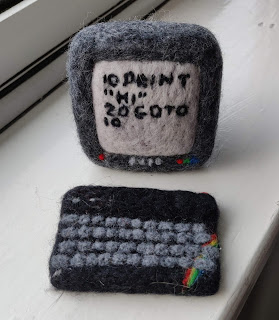 and for my birthday he made me this fab Wallis copy for which today I have made a frame, most appropriately for a Wallis, from several layers of carboard. 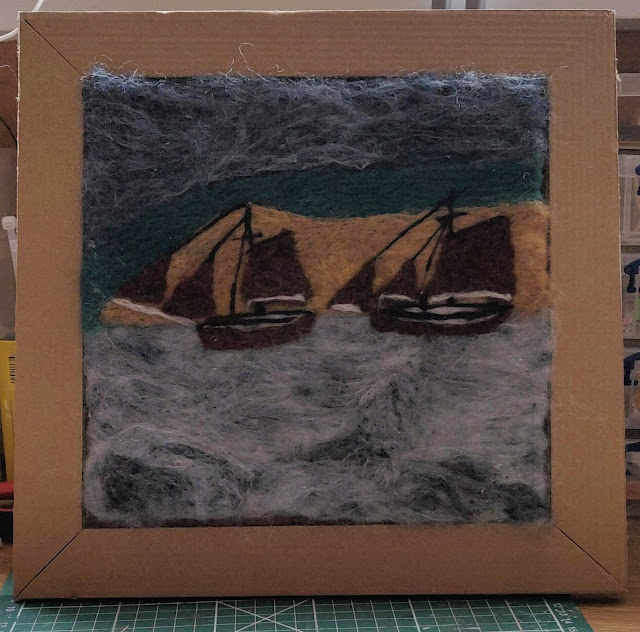 Here below is a picture of the Alfred Wallis original, it's called Two Ships. 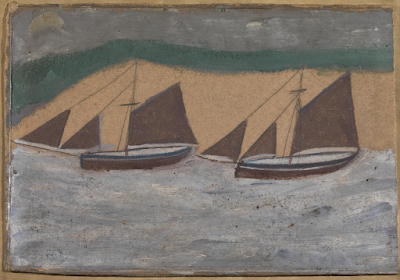 My frame is alright as well - cardboard just like it ought to be.

"Hauling by horses is still the system most used on the general body of the inland waterways, and in it must be including hauling by mules, which is rare, and by pairs of donkeys, or, as they are termed, 'animals.'"

So begins the section on Haulage in the 1904  Bradshaw's Canals and Navigable Rivers of England and Wales. 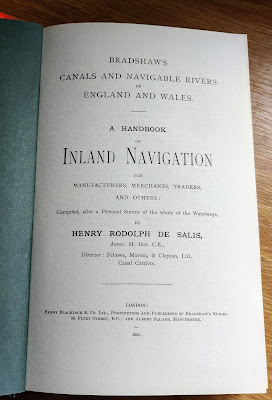 On talking about towing along river banks, it goes on to complain about the use of stiles rather than farm gates along the Bedford Level"

". . . some of them as high as 2ft 7in, over which horses towing have to jump, giving themselves frequently nasty knocks in so doing."

This Bradshaw's publication, of which I have written before, is not of the Michael Portillo type, having no descriptions of local scenery or architecture, but I love it. This is not a history book, but a historical document, a snapshot in time and all the more vivid for it. As a handbook mainly for commercial canal fleet operators it contains nigh on 500 pages of detailed information on boats, locks, tunnels, distances, depth of canal and much else, all frozen in time in 1904.  What use it was to the actual boatmen is a matter for speculation, but as they knew the canal like the back of their hand and a lot of them couldn't read anyway, I don't suppose they valued it much. Whilst I have no inside knowledge, it seems highly probable that that is where the brilliant Nick Atty started compiling his data for the number one canal website Canalplan, the clue being that it gives distances in miles and furlongs as Canalplan does..

Interestingly, the book makes no mention (that I can find) of diesel or semi diesel engines, except to say "Oil engines have been tried but have never passed much beyond the experimental stage." So the section on mechanical propulsion focuses on steamers although in a somewhat derogatory fashion.

"The ordinary 'narrow' or 'monkey' boat with a capacity of about 30 tons . . .  is quite small enough already without further deduction on account of engine room space".

It's the window on how things looked to people at the time that I like in addition to the little details, such as:

"A lock of water may cost anything from nothing upwards.   . . a lock of water pumped from the Artesian Well to the Tring summit of the Canal cost £1 4s 8d and a lock from the Cowroast Well 13s 7d. "

On the Birmingham canals where the locks are of the narrow type, the cost of water per lock was 2s 4d.

More sections describe bridges, tunnels, aqueducts and tides, before going on to set out the design,  dimensions  and carrying capacities of the many different types of boats in use, from sailing wherries to monkey boats.  And then we get into the main meat of the book which gives descriptions of every navigable waterway in the country, -Proprietors, distance table, locks and their dimensions, towing path, types of vessels in use and tidal information where appropriate.  What I like is that although this information is well over a hundred years old, the bulk of it is still accurate for today.  There are a couple of things that sadly don't translate so well, one being the listing of quite a number of waterways that have since been lost, and the information on maximum draught.  I doubt whether a boat with a draught of 4ft would make it down the Slough Arm today, but that's the depth Bradshaw quotes.

"The ordinary traffic through both Braunston and Blisworth tunnels is worked by the Canal Company's tugs.  Gunpowder boats have to 'leg' through."

I bet they did! Gunpowder and boilers don't sit well together. I even wonder at the thought of sparks from the legger's hobnails against the bricks. And there would have been quite a few gunpowder boats through Blisworth en-route to the Royal Ordnance depot at Weedon. The entry of Blisworth goes on to give the Company Steamer daily timetable showing 8 steamer tug passages in each direction each day starting from alternate ends every hour from 5am to 8pm.  I suppose the gunpowder boats might slot in between or go outside of steamer hours.

And so it all goes on.  Fascinating stuff and even useful today.  Had I been able to consult it before towing a masted tender under Ludham Bridge on the River Ant many years ago, we might not have broken the mast and lost our damage deposit. While you can't go boating yet, it would make a super browse to fill in the time. You could even plan your cruises with it. It exists in a modern "exact facsimile" copy easily available today.  Amazon sells it for approx £12 (other suppliers are available).