I had a nice letter today from our boatyard (High Line Yachting) , wishing me a happy new year etc and mentioning that mooring fees are going up by about 15% :-(. However they were quite right in mentioning that they are still the cheapest in the area, considering the good level of security and facilities they offer. We checked out the opposition over the summer. If we were to moor two miles up the cut at Packet Boat marina, our fees would be around £1000 per annum higher! I guess we'll stay put for a bit.
Here we are on our mooring spot. First looking towards Slough 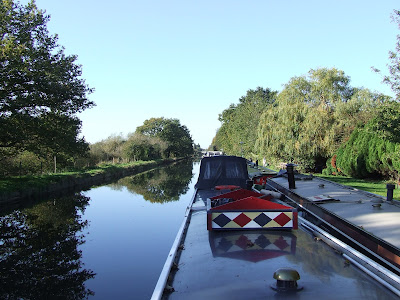 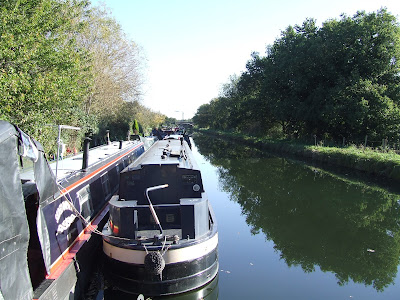 We've been on the road for the last two days, delivering our son Peter back to Cambridge and visiting other son Richard on his boat at Huntingdon. On the way home we detoured a good few miles for a spot of lunch at one of our favourite canal pubs - the Anglers Retreat at Marsworth. Lovely food and perfect Tring Brewery beer.
Posted by Neil Corbett at 9:39 pm 1 comment:

We popped over to the boat the other day to check it was still floating and to measure up what Kath calls the "back" shelves, which are actually at the front of the boat. I know what she means though because when you are inside the boat it feels the other way round.

Herbie, you see, is one of the one or two percent of boats that has the bedroom at the front, the galley at the back, and the saloon ( and the bathroom) in the middle. The vast majority of narrowboats have a layout something like this :

Some traditional boats may also have an engine room between the bathroom and the bedroom, and of course longer boats may have extra rooms.

Of course there are pros and cons. The more usual layout is especially nice in summer when the front doors lead straight from the saloon to the front deck, and also has the saloon at maximum distance from the engine and any noisy gubbins.

1. the galley is handy for making tea etc when we're on the move and on the rear deck
2. the wood burning stove is admidships and distributes the heat better
3. the side opening doors are right in the saloon to give an outdoor feel in nice weather

Horses for courses really, but I'm a bit surprised that our layout is so uncommon.

According to our site meter this blog has just had its 1500th visit since we started counting! Actually its not so impressive as it seems as quite a few visits are from people who have reached us accidentally through a Google search for "Slough" or "stove" etc. There do seem to be a few repeat visitors though, so if you are one, thanks for coming back and Happy Christmas!

Posted by Neil Corbett at 4:22 pm No comments:

Any boater reading this will already have heard the news that the EC have refused to let HMG allow continued use of red diesel for pleasure craft. So sometime we'll be paying about double what we do now. I guess that's another £250 or £300 a year for us. Ah well. Apparently they are allowed to make arrangements for a transition so perhaps that nice Mr Brown will take pity and give us lots of warning or maybe phase in the change. We live in (slender) hopes.

I shouldn't think many people are boating from choice at the present. The rivers down here are in "red" condition and it has been really windy. My garden fence was leaning badly today, and having propped it up, the gate won't now shut, partly because the wood is swollen with the constant wetness.

Changing the subject completely (boaters may switch off now if they want), we went to a fascinating do on Friday. It was Roger Watson's 60th birthday bash coupled with the 17th anniversary of Traditional Arts Project (TAPS), of which he is artistic director. Roger is well known to folkies throughout the land and a friend of ours. As we expected, it was a real mutlicutural event. The (huge) buffet was a mixture of very authentic Indian and Middle Eastern snacks and sweets, and the entertainment featured a whole list of acts including an amazing steel drummer, a lady playing Andean? music (pan pipes etc), a village folk choir, a mumming play with longsword dancers, songs from the brilliant Rob Johnson, a few more I can't now recall, and of course Roger's Anglo/ Afro/ Indian band Boka Halat who were on top form. All that and free guinness too. What more can I say!

Christmas is coming and we went to a carol singing session at a pub near Alton. We sang for nearly two hours. Exhausting.
Posted by Neil Corbett at 3:40 pm 2 comments:

No Herbie trips to report at the moment, although we did a short canal visit last week when we went (by car) to Banbury which is on the Oxford canal. I'd forgotten how small the single locks look. We are getting so used to the two-boat-width ones on the GU that the single ones seem tiny. We prefer single locks really as they hold the boat snug, are lighter to operate and they fill / empty faster. Next year we hope to do the Oxford canal on Herbie.

The reason we were in Banbury was to go to Banbury Folk Club to see one of my favourite performers, Anna Ryder, who was absolutely brilliant (check out her web site here ). In over forty years of folk clubbing I must have seen thousands of performers, and Anna ranks with the best (IMHO). Apart from the fact that she can play anything (like piano and trumpet simultaneosly), her songs are so original and her general enthusiasm and energy is always a treat. I defy anyone not to enjoy seeing her perform. The club organiser Derek Droscher is an old chum of ours. Poor old Derek is now suffering the attentions of the Performing Rights Society (PRS) who want a sizeable cut of his door takings to cover copyright. This is the first time I have come across this in a small folk club, and were it to become general practice it would surely shut down 90% of the small clubs out there :-(

I'm just reading "Idle Women" by Susan Woolfitt. Its a true account of the lives of women who supported the war effort in the 1940s by operating narrowboat freight transport. I have to say its an unexpectedly good read, made all the better by her regular references to places on the cut that we know so well from our travels in Herbie.
Posted by Neil Corbett at 2:48 pm No comments: