I hope you think this post is worth the wait, but that’s not the reason for it’s title.

There we were tootling down the S Oxford with our friends Jan and Stephen and thinking of our dinner booked at the Great Western in Aynho.  It was mid afternoon and we had our fingers crossed about getting a mooring.  Approaching Grant’s lock a man on a boat coming the other way shouted that we might have a long wait “some work going on at the lock”.  Indeed there was, and it cost us at least an hours wait, but it was worth it.  Not only that, but it ties this post very neatly in with my last one when I asked if anyone knew the name of those big T shaped bits of wood were on the CRT boat at Banbury the previous weekend.

Well they’re called Bumper Bars and the guys down in Grant’s lock were about to fit one.  here it is, in the lock and on the boat. 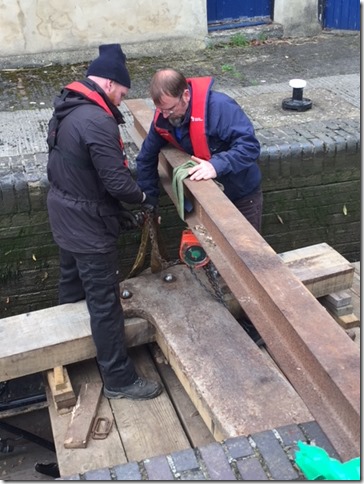 As you can see, it now had its wacking gert iron slab bolted to it. I should like to have seen how that fitted that slab without losing a few fingers.  I wouldn’t like to guess the weight, but clearly lifting the whole assembly into place was going to be a non trivial task.  Grant’s lock has no road access, so a crane was out of the question.  The first job was to get the bumper facing the right way and at the front end of the work boat, so as you can see an RSJ was laid across the top of the lock and a chain hoist strapped to it and to the bumper.  With the chains tight, the water was then let out of the lock, so lowering the boat until the bumper was left dangling. 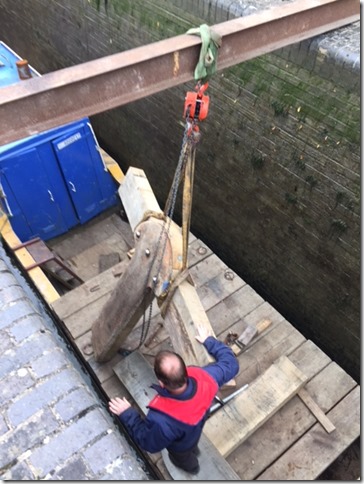 Then the boat was backed off until the bumper was at its bow and the lock was refilled, laying the bumper down again.

Next, with the chain hoist unhooked from the bumper the RSJ was moved to the head of the lock, the boat moved up and the bumper reattached and the boat descended once more, now leaving the bumper where it could be re hoisted ready to be manhandled into position. 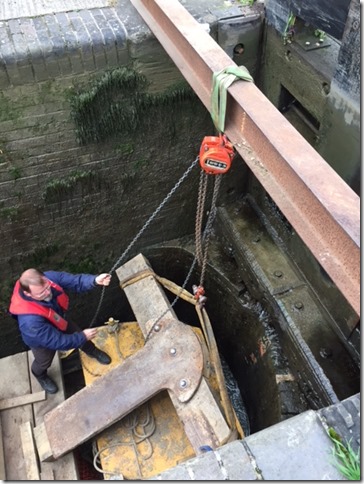 The bar has to sit on that curved ledge by the top gate cill, but first they have to attached some retaining chains to the cill using some gert big iron staples. First drilling holes, then knocking the points in with a lump hammer and finishing off with a mighty whack from a sledgehammer.  In that confined space it’s nowhere near as easy as it sounds. 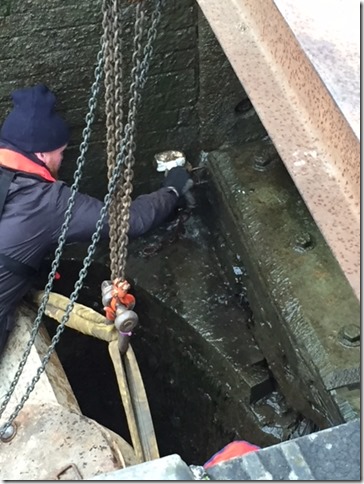 At last. with the boat lowered and backed off, the bumper could be swung into place.  It needed a fair bit of persuading and in terms of elf and safety, some pretty dubious acrobatics by the lads, especially as the boat kept drifting backwards as they shoved the bumper forwards. 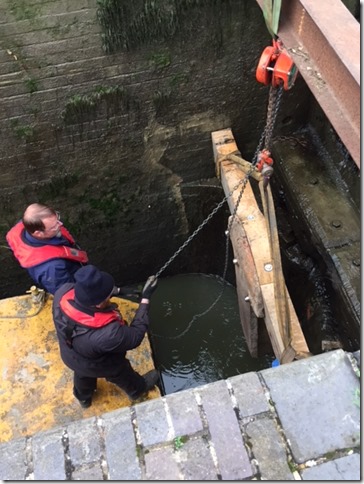 The short retaining chains were then fixed to the bumper and it was all over bar the removal of the straps, in itself not an easy thing given where the bumper now lay,  and some general tidying up. 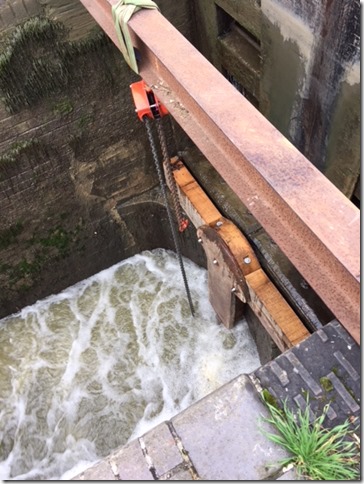 The CRT gang went on their way, declaring the lock open for business and we descended with a new found appreciation of what it takes to do jobs like this.

Well, I hope you enjoyed that.  We certainly did and it was well worth the hour’s delay, especially as there was still room at Aynho when we got there.

Lots to see and learn in Banbury today. 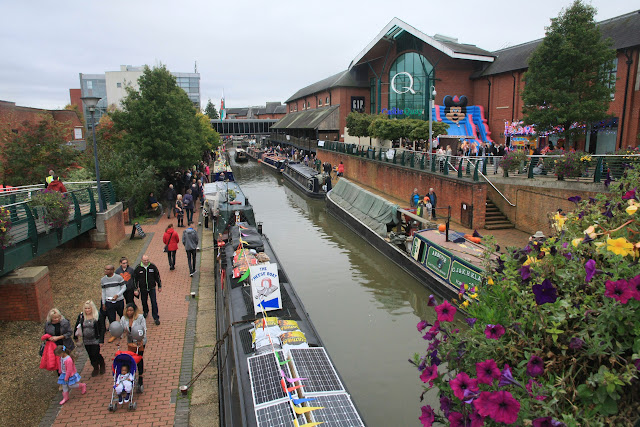 Well Banbury Canal Day, despite being cancelled and then uncancelled, went pretty well. The good folk of hereabouts turned out in lots of thousands to buy food and crafts from the various market areas and the trading boats, there were long queues for the boat trips and the live music outside the social club was popular, as was the kids funfair in the park. We just sat there looking pretty, well Herbie did, resplendent in our bunting. 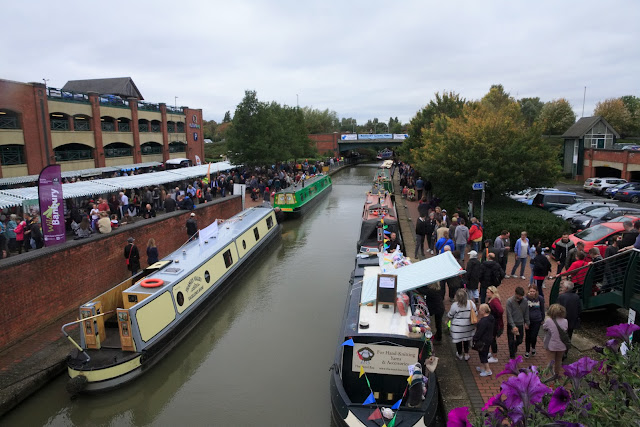 Lots of local charities had stalls too, as did IWA and CRT, who also had a boat with some bits of lock on it. Can you identify what the bits are, and do you know the correct name of them? 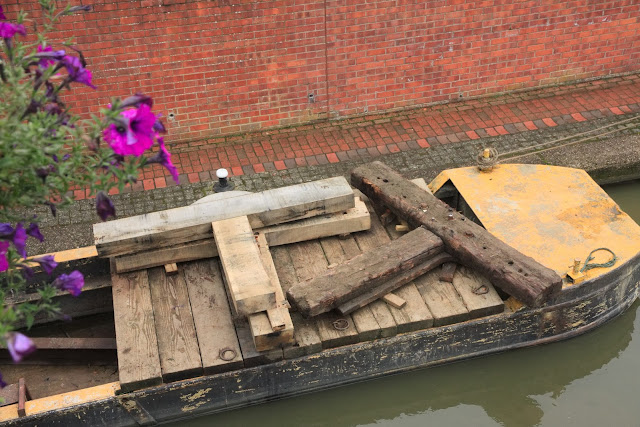 I had a long chat on Friday with Nigel, (or was it Kevin? Maybe it was Tarquin. Anyway..) CRTs Head of Operations for the Oxford Canal. He's been with BW /CRT for 22 years and seems to know every nut and bolt of every lock on the canal. Definately a hands on sort of bloke. We talked about various locks down this way that had had or still have paddle problems and he was explaining some of the challenges they face in getting them fixed. The largest challenge seems to be funding, the cost of some of the castings required for some of the paddle gear is eye watering. Then there is the problem of boaters who think they know better trying to operate faulty paddles that have been taped up awaiting repair, and making a matters a lot worse. That's what happened at Marston Doles last week.

I asked about the crumbling brickwork on some of the lift bridges. He said their aim was to repair or rebuild two per annum, but sometimes the budget won't stand it. The one they rebuilt at Somerton this year cost 200 grand!! (I think I heard him right).

Reservoir levels, he said, were still a concern. Apparently a lot of this year's rain has been isolated and not where the reservoirs can catch it. Off the top of his head he was able to quote me how many millimeters depth was left in each of his reservoirs. There is a lot of back pumping going on. Apparently water is being pumped up all the way from Leamington to the Braunston pound and then on up the Napton flight to feed the summit. He did quote me how many litres per second they pump, but as he pointed out, it takes a helluva lot of pumping to replace what is lost by a busy morning on a lock flight.

So tomorrow we finish our four week cruise. It's been very good indeed. No doubt later I'll be able to remember more things to tell you.
Posted by Herbie Neil at 6:27 pm 4 comments: