It looks like we’re in a wettish spell weather wise, but of course we needed it after the dry April.  I took a look at the CRT Reservoir site and as expected, the reservoirs took quite a hit last month, what with the dry weather and the start of the boating season.  Down south the typical drop in levels was around 10% over the month, which isn’t too serious but not an ideal start to the season. Further north, on the Leeds and Liverpool, levels fell by 18% and the poor old Lancaster went down by 24% although some of that was due to a draw down for engineering works.  The report says that “We are advising local operational staff on the optimum feed quantities to ensure efficient use of the water available and maximising use of back pumps (where they are installed) to recirculate water used by locks, in case the recent dry weather continues through the late spring and into the summer.”

Well it looks like bad weather might come to the rescue, but what then for those of us who have to negotiate rivers.  Of course, most boaters know about how to check on the Thames (http://riverconditions.environment-agency.gov.uk/) , but what about the smaller  rivers . Where do we check on them before setting out? Down on the jolly old Oxford we have to join the cheery little Cherwell on a couple of stretches, above Aynho, and between Enslow and Thrupp.  We are not supposed to continue if the level on the indicator boards go into the red.  Little rivers like this can go up and down like yo-yos.  Others like the Stort, the Soar and the notorious Nene spring to mind.

So today is asked Mr Google for help and lo and behold he came up with the goods, pointing me to a site called

Apologies if you already knew about this site, but I didn’t, and it is exactly what we want. It appears to be quite a new site, and they say it is still under development, but already it looks great.  Bear in mind though that it is primarily designed to indicate river levels from a flood warning point of view rather than a navigation one.

It seems to have precise monitoring levels for all the English navigable rivers I could think of and it looks like they may be updated at least  daily.  I’m sure they wont mind me showing you a couple of screen shots as I now find myself plugging their site: 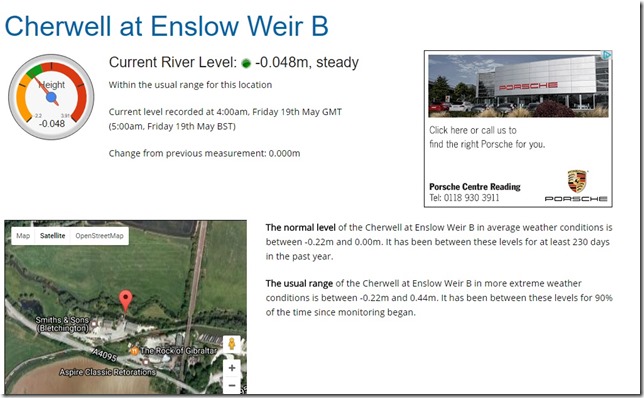 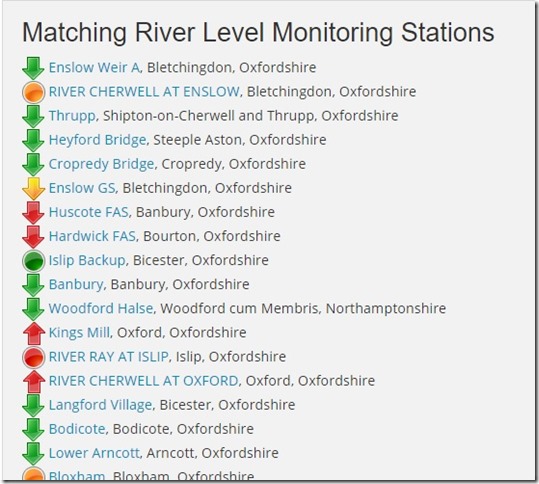 You’ll notice from the top one that it might also be handy for those times when you want to buy a Porsche, I’m fresh out of them myself as it happens.  Anyhow I think it’s a brilliant site and I’ll certainly be consulting it.

Posh Broads and an exploding rocket

I’m alive!!  Yes I’ve survived another year of the dreaded Norfolk Sailing Weekend.  I only got whacked on the head once by the boom and no-one fell in or got stranded on a mud bank this year.  Amazing.

The winner of the Bowsprit Award for the helmsman inflicting most damage on his boat was Rick.  The citation reads: “For not looking up and noticing the overhanging tree and so demolishing the mast top burgee(little pennant that indicates wind direction)”.  Admittedly a minor offence, but somebody has to take the trophy home.  Well done Rick.

This year we were forced to try a new base since our usual holiday let at Thurne is due for demolition, so we relocated to some very nice barn conversion cottages near Ludham on the river Ant.  Consequently, we were able to explore waters that we hadn’t seen for many a long year.  Probably not since our famous week aboard the Wherry Albion in 1973 where I fell backwards into Salhouse broad in  spectacular fashion just as a big pleasure boat full of tourists with cameras was passing.  It says something for the longevity of friendships that five of us sailing this weekend were on that trip 44 years ago.

Passing through Horning, I realised that I had forgotten that this is the posh end of the Broads.  The riverside houses are large and expensive looking, many of them thatched 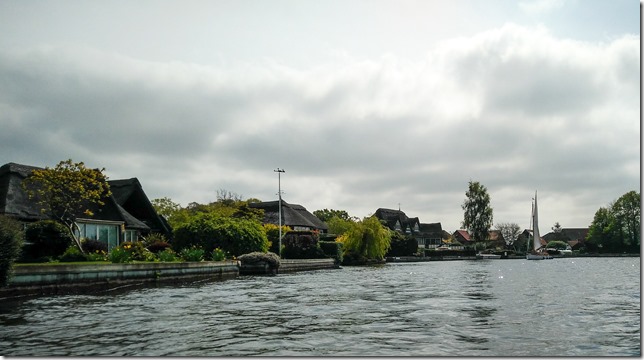 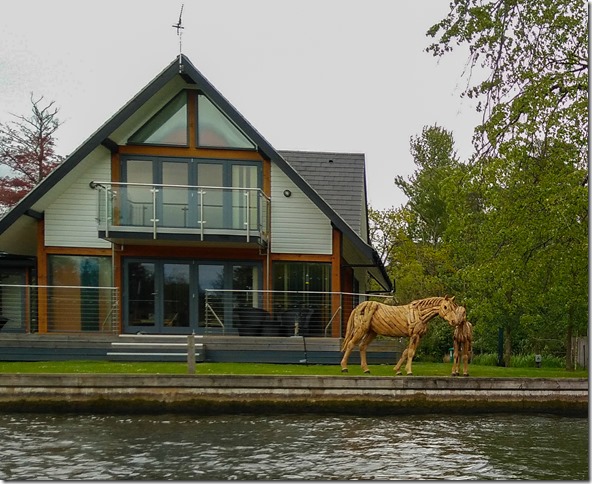 All this is a far cry from the humble little chalets that adorn the banks of the Thurne up at Potter Heigham.  I can just imagine the conversation between residents of each at a party.  “Oh, you have a riverside property too.  Where is it?” - “Potter Heigham” – “Oh,” sniff, “how, um, quaint.”

We managed to sail all the way to Salhouse to revisit the scene of my historic backflip and moored up for lunch on Salhouse island where our boats lay empty like the Mary Celeste while everyone paid a visit to admire the bushes (or something like that).  Here you see the very tree that won the award for Rick. 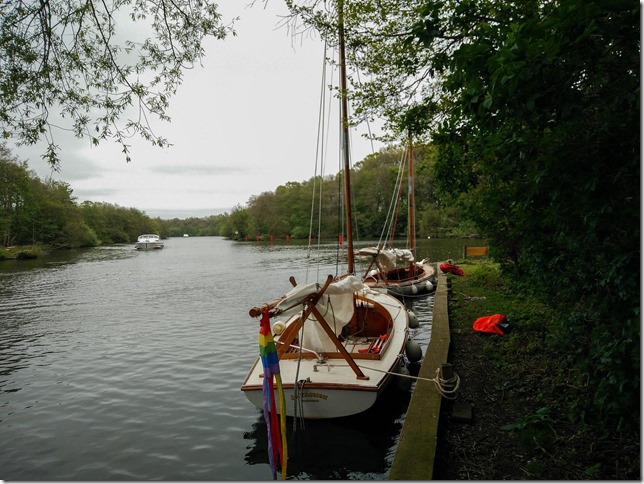 Probably the best bit of the weekend was the launch of the vinegar and baking soda Coke bottle rocket launched by Frank, who should stop smelling of vinegar after a month or two after his first attempt sprayed all over him before he could retire to a safe distance.  It might be 44 years on but we’re still big kids at heart.

Tomorrow we set off for our annual group sailing fracas on the Norfolk B Roads Broads.  Once again we have checked our wills and made our confessions before setting off for this terrifying annual ritual.  It wouldn’t be so bad if I knew anything about sailing, but even then zig zagging in a little sailing boat down rivers full of drunken holiday makers who only picked up their huge plastic megacruiser that morning doesn’t seem to get any easier.  Some of these cruisers are approximately the size of an aircraft carrier. Generally I refrain from taking the helm unless we find ourselves in some quiet backwater, preferring to rub my cold wet hands raw with heaving on the jib sheet whist trying not to be tipped overboard.  On the plus side we will be spending the weekend with old and dear friends (most of whom are more skilled than I at sailing), so if we perish, we’ll all go together.

As usual we will be attempting not to be the winner of the Bowsprit Trophy, awarded to the person who inflicts the most damage on his boat.  I myself am a proud past holder of this prestigious award after a sudden gust of wind whipped our barque into the side of a passing cruiser some years back.  I don’t think the boatyard realised the bowsprit was two inches shorter when we returned the boat so unusually, we kept our deposit that year.

On Saturday night we shall all share a meal cooked by the drawer of the short straw and undertake the customary quiz where each person donates ten questions.  In recent years I have provided the music round, playing intros, middle eights, classical snippets etc from a music player.  Having run out of ideas for this, I have instead this year recorded sound snippets of well known people laughing.  I don’t think it’s too difficult, but the questions do tend to be easier when you know the answers.  We’ll see. One of our party is from Yorkshire, so no doubt it will be lost on him.

“What didst thee think on ‘im.”