What a wet weekend! I went up to pick up Herbie from Bulbourne dry dock. The hull looks a lot better as you can see in these before and after pics 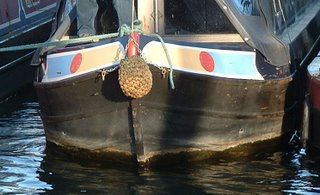 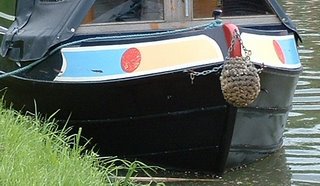 The oil leak is fized, so that's good too. However the renewal of the tiller bearing has left it a bit stiff to move. Jem Bates at the dry dock thinks the rudder might be a bit out of alignment between top and bottom bearings and this didn't show when the old tiller bearing was worn. We'll try it for a bit to see if it eases, but if not, they'll have to have another look.

Next job is to do something about the TV arial which clutters up the roof. I've taken it to bits so the top can stow out of sight in our newly decorated roof box. At the moment it obscures half of the front of the box. Can't have that! I just need to sort out a new arrangement for the poles and guy lines for quick assembly. 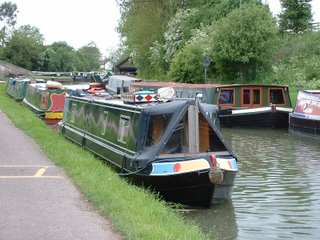 See the wide beam boat across the canal from Herbie. He had a neat way of delivering some visitors back to the towpath on my side. He just untied the front of his boat and swung it across the canal like a bridge. His visitors hopped ashore and that was that!

Before the heavens opened I cruised down to Cowroast through the thickly wooded Tring cutting stopping for a spot of fishing on Saturday night. All the ducks now seem to have lots of ducklings and I also saw some moorhen chicks. The swans are still incubating by the looks of it.

Next week, the Wendover Arm canal festival. I hope the weather improves!

Posted by Neil Corbett at 3:20 pm No comments:

Herbie currently lies up at Bulbourne awaiting a replacement oil seal (hopefully today or tomorrow), but in the meantime we have not been idle. One thing that we inherited with Herbie was a heavy wooden box which sits on the roof and holds coal, wood and any other junk. Its made of 2inch thick timbers, unplaned and untreated. At first we planned to ditch it, but it could be handy if smartened up so we brought it home for a lick of paint. Anyway, I realised it would be a good practice piece for boat decoration skills, so I've done it up a traditional diamond pattern. I wouldn't like to think how many hours it took, but I'm pretty pleased with it now, and it should be an asset to the boat. Here it is before and after 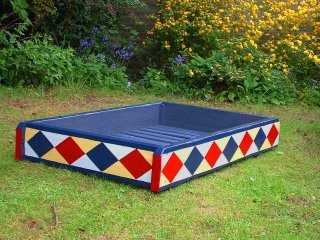 I've also given the gangplank a good paint, blue with red edges and it to is transformed from a scruffy old plank into something smart.

Now I've learned a few of the skills, I'm going to have a go at repainting the front of the cratch in a diamond pattern.

A new colour scheme for Herbie?

We're not too keen on Herbie's pale blue name panel, and have been thinking about a new colour scheme for the boat with a minimum of repainting. Here she is in her present livery.

With a bit of (somewhat rough) computer work, here she is in two alternatives

With red and white trim

We'd be very grateful for your opinions on which looks best. Please click on Comments at the foot of this posting to reply.

Stoppages, snake, and sunsets - our trip to Bulbourne for blacking

1. Stoppages, a mysterious death and other complications

We were booked in at Bulbourne dry dock on Friday to have Herbie's bottom pressure washed and blacked, so it was with some alarm last week when we discovered that the canal had been closed at Cowley, just north of our moorings at Iver. A dredger had pushed a hole in a culvert under the canal's bottom and millions of gallons of precious water was disappearing down the hole. Until they fixed it we had no prospect of getting to Bulbourne.

Luckily BW pulled out all the stops (er, somewhat inappropriate metaphor there) and fixed it in the nick of time, so on Tuesday morning we were on our way. Interestingly it was a bad week all round for the Grand Union as they had to drain the canal at Stoke Bruerne to recover a dead body in a car!

A further potential delay was that Kath had to go home on Wednesday afternoon for an unavoidable appointment. Luckily we found a volunteer to crew us through the locks that day. Adele, Neil's former boss from Surrey CC was persuaded to join us and put in a hard days locking, having had no previous experience at all. Watching her helping us in the morning we wondered how she would manage in the afternoon without Kath's help. However, we needn't have worried and she rose valiantly to the challenge, working nine heavy locks in very warm conditions. I confess a certain satisfaction to having her work for me after the years I worked for her! Here she is pulling her weight - 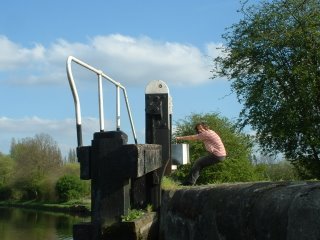 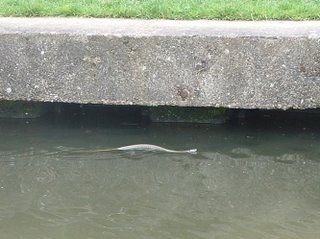 This grass snake was writhing its way up the canal as we approached the M25 . Actually it was very close to the spot where I saw a mink on our last trip. It just goes to show you don't have to go to the wilderness to see wildlife.

The snake would have made a nice meal for one of the many herons we saw, our favourite being the resident heron at Berkhamsted lock. He takes no notice of boats at all, or the passing commuters over the bridge. 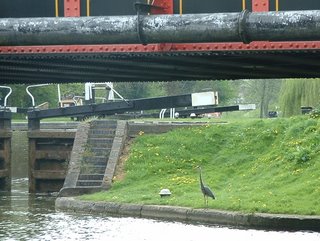 Thanks to Adele's help earlier on we arrived at Bulbourne in plenty of time for our dry dock appointment, and that evening we walked down the superb Marsworth lock flight to the Anglers Rest for a meal and a pint. Walking back up in the sunset was incredibly beautiful looking out over the reservoirs and all their wildfowl. A more perfect evening would be hard to find. Naturally I didn't have the camera with me! Next morning we had an extra treat to be surrounded by loads of large carp basking in the warm water, and spent some time feeding them bread.

Just after nine o'clock Herbie went into the dock and we had a nervous couple of hours wondering what they would find when they pressure washed the hull. We needn't have worried, because when we returned Ben at the dock pronounced the conditions of the starboard side as "good" and the port side as "very good", as were the anodes. Here's Herbie in the dock, prior to washing. 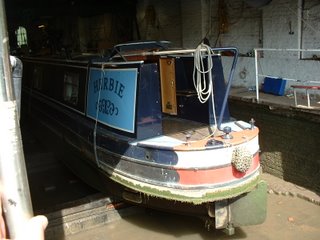 The two coats of blacking could now go on. However the tiller/ rudder bearing was a bit worn so we decided to have that refurbished (not a big job). While we were in a spending mood I also asked Jem the owner of the dock to attend to the oil leak from Herbie's engine, so is going to fit a new sump gasket.

And so we abandoned Herbie to await her overhaul and set off for home by road. Next weekend we'll go and mover her to await our visit to the nearby Tring Canal Festival on Bank Holiday weekend.

Posted by Neil Corbett at 9:57 am No comments: