How to enjoy winter lockdown.

Despite the cold and the isolation and the wait for the jab and poor old Herbie left alone in the cold and all that, there are things that cheer me up.  The kids in the square outside our house were having a whale of a time in the snow yesterday.  Well not just the kids actually, a number of the adult neighbours were having a jolly snowball fight. Last night, after they'd all gone to bed I snapped the results of their efforts before the snow had all gone. 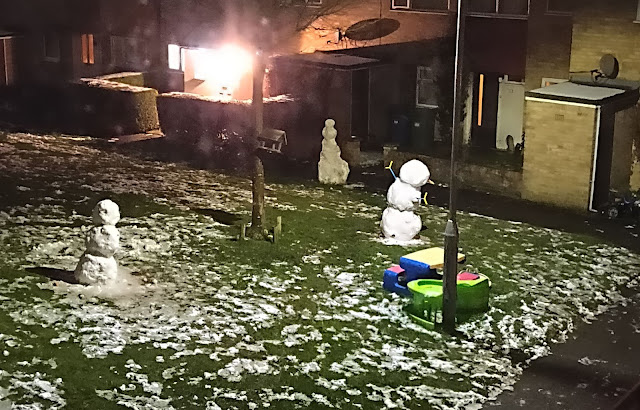 On the other side of the house we look out over the church yard which like a secret garden has given me so much pleasure over lockdown. 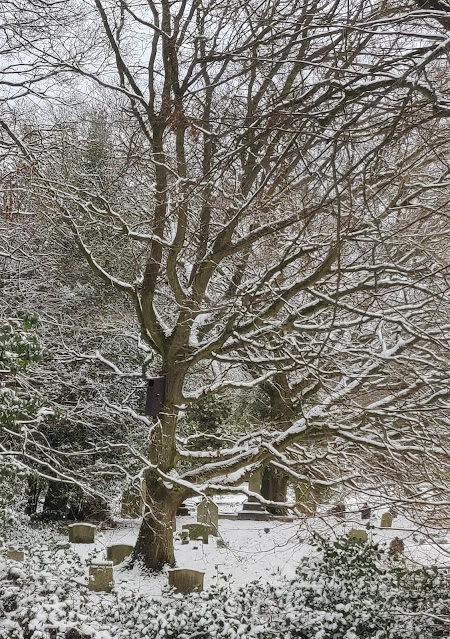 The graves over at our end of the churchyard mostly date from the second half of the nineteenth century and it is now designated as a wildlife area.  The wildlife themselves seem to have read the notices too because they take good advantage of it.  Birds, insects, wild flowers, foxes, squirrels, we get them all, and being so close, they stray into our garden all the time.  Most of our hanging bird feeders are cunningly set up to be squirrel proof but I let the squirrels get at one of them and they don'r need asking twice. 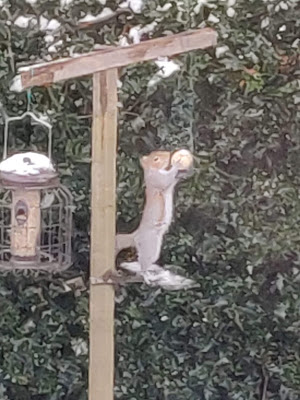 Next weekend we'll be doing the RSPB annual great garden birdwatch when all who want to are invited to watch and count the birds in their gardens for an hour and send in the results.  Luckily I can observe it all from a bedroom window. Last year we didn't get many but this year looks more promising.  Over the last week we have had pigeons, robins, great tits, long tailed tits, blue tits, coal tits, rooks, blackbirds, magpies, a dunnock, a nuthatch and yesterday our first ever blackcap.  It's a pity we're not allowed to count birds that fly over the garden without landing because we get a red kite most mornings and over at the church tower a neighbour assures me there is a peregrine falcon although I have yet to see him.  I have however heard all the other birds panicking when he is about.

I take a walk around the graveyard most days and am beginning to regard the people resting over there as friends.  I find my self giving a cheery  "Hello Willie" or "Morning Lord Arthur" as I pass their graves.  I have now built quite a large dossier of potted biographies of the more illustrious incumbents.  Spring is beginning to spring over there already, the daffs are about eight inches high and the crocuses are already out. 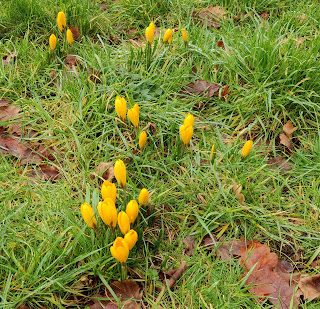 I was going for a longer exercise walk each day until a few days ago something 'went' at the back of my left knee so now I need to rest it I suppose.

Inside the house I've been trying to record a lot of the songs I know so I can leave something to annoy the kids after I'm gone.  I think I've done about ten songs so far. The longer I leave it and the older and more senile I get, the worse at it I will get so that's why I'm doing it now while I can still remember the words and all that.  Here's a sneak peak at my untidy 'recording studio' aka the back bedroom. No cat swinging here.

And if that wasn't enough, to keep me busy, the clever people at Raspberry Pi have just released a powerful little microcontroller  called a pico for a trifling £3.60 so I've ordered one of them to play with.  That'll keep me quiet for at least a month I should think.  One thing I'd like to build is a gubbins I could leave on the boat to keep a log of the inside temperature during the cold months of winter.

I hope you are managing to keep sane and well.  See you next time.

Do you read your insurance policy details?  I thought I ought perhaps skim through them this time as I came to renew Herbie's insurance, especially as last year we changed insurer.  We're now with GJW if anyone's interested.  To cheer us all up, here are some of the more interesting exclusions.

Speed: Sadly they won't insure Herbie if she's capable of exceeding 17 knots.  Cor, I'd like to see that!  Maybe on the rip tide out of Denver sluice or something.  I think you might do 10 knots on the outgoing Thames tide through Barnes if memory of the Jubilee cruise rehearsal serves me right.
Accidental damage: We're covered if an aeroplane drops something on Herbie as long as it's not a bomb, or I suppose if the bomb were accidentally dropped in peace time, I think we might still be covered.  How reassuring.
Theft/ Burglary: If the boat is unoccupied for 60 or more consecutive days, any subsequent theft or burglary is not covered while the boat is still vacant.  Ooh I bet that would affect a lot of us this year. I'm pretty sure the marina wouldn't accept responsibility.
Sports:  Bang goes my chance of parascending ( or indulging in "similar aerial activities") off the back of Herbie - the personal injury cover forbids it.  Neither can we go scuba diving off her.  I'm not even allowed to be or become insane apparently!
Age: Now here's an interesting one.  They won't pay for any personal injury if I'm 75 or older.  Next year that'll be me. Oh well I might as well go insane next year then.
Injury payouts: I get ten grand for every leg or arm permanently lost and the same for every eye. How can you temporarily lose a leg? Lord Nelson would have been quids in at any rate.
Third party damage:  Apparently I'm not allowed to launch a cyber attack from a computer on Herbie. Are we not allowed any fun?
Plumbing - a warning to us all.  To stay insured against damage from burst pipes you either have to have central heating set at 10 degrees or higher between November and April or turn your water off at the tank stop cock.  I'm OK there, just before the November lockdown I got out to Herbie, drained the plumbing as best I could and turned of the tank tap.  Any bit of water still lying in the pipes after that should be OK especially if you leave the sink and shower taps open.
Lastly  they wont pay if my gun barrel goes rusty and/or bursts.  Quite right too.
Well there you are, something to keep us amused while we wait for our jab letter.  Stay safe folks.
Posted by Herbie Neil at 6:06 pm 1 comment: