How we plan to Get Crexit Done

In recent weeks speculation has been rife on the interweb - the Herbies say they're planning a move, but where will they go and when?  Well all can now be revealed. Negotiations at either end have been undertaken, inspections of a new home have been undertaken and a dotted line has been signed upon.

Sometime in the spring, amongst much wailing and gnashing of teeth, Herbie will be leaving our lovey mooring at Cropredy and heading north past Braunston, past Hawkesbury, past Fazeley, past Fradley and into her new berth at Kings Bromley Marina near Lichfield on the Trent and Mersey canal.

We went up there (by car) to have a look around yesterday and now we're excited to get the move done.  The marina holds almost exactly the same number of boats as Cropredy, but it feels very different - a much more cosy and higgledy piggledy layout than Cropredy's huge rectangular pond and more sheltered.  We've been offered a berth on a herringbone jetty which at first we weren't enthusiastic about, but when we discovered the jetty led to a little grassy island with a round covered log shelter and benches outside and trees for shade (all only a few yards from the boat) we soon saw the benefit.

Kings Bromley marina belongs to the same group that now owns Cropredy marina so that makes the transfer a bit more straightforward and the lovely managers at both ends have generously given us flexibility about exactly when we make the move - probably late March / early April.

Even though it was a flying visit yesterday, we had to find a bite to eat for us and for our "sounding boards" Rick and Marilyn who came with us, so we went off to find the nearest pub in the village (the Royal Oak) and we're happy to report a) that it's a very good pub with good food and beer (Marstons in that area of course, being not far from Burton on Trent), and  b) that as we hoped, prices are a good bit below those we suffer in the south.  Interestingly we also noticed that the general run of the boats in the marina were less up-market than at Cropredy which has a lot of swanky boats, so we'll move up the shinyness pecking order a bit.

So we'll have fresh waters to explore and we hope new friends to make.  before then though we have to deal with the small matter of a disintegrating engine mount on Herbie, but fear not, that's all in hand and we'll be having it done at the iconic Tooley's Boatyard in the not too distant future along with a general engine look over. Wer'e currently waiting for a "slot". There's something nice about having your boat fixed at Tooley's as any canal history enthusiast will know.

Looking forward to an exciting 2020.  Tag along why don't you.

Mischief Afoot and the possibility of a smart gadget

After my birthday this week I may only be 27 years short of my telegram from the Queen (or I suppose by then, King) but I still enjoy a bit of mischief.

Here's a little present Kath bought me for Christmas. 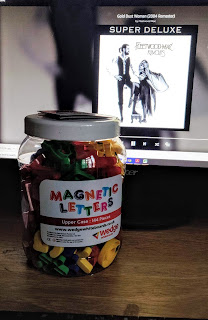 (yes, today I am mostly listening to Fleetwood Mac on my PC).

If the letters stick well enough to Herbie's cabin sides, I'm now free to embellish her name panel with things like this.

I can't wait.  Any ideas for other amusing strap lines welcome.

Also, I have another project in mind.  We recently enjoyed a visit to the brilliant little Whipple Museum of the History of Science in Cambridge - just a few yards from the Cavendish Lab where Crick and Watson unravelled the mystery of DNA and only a few more yards from the pub where they celebrated afterwards.  The Whipple museum might also be called a museum of lovely old gadgets and exquisite workmanship, like this reproduction of John Harrison's famous clock that enabled navigators to find out where they were after centuries of being a bit lost. 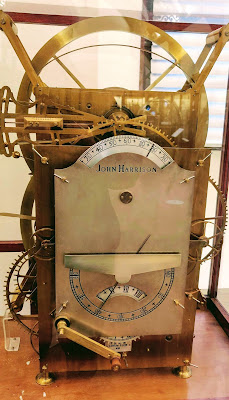 No I'm not going to attempt one of them - who do you think I am?  But some other exhibits did inspire me - particularly little brass astrolabes and some lovely old slide rules.  Oooh I love slide rules. In my day as an engineering student they were rarely out of our hands.  Only as accurate as your eyesight and the steadiness of your hand, one of our lecturers always used to refer to them as guessing sticks (I think he thought they were too new fangled).  Ask an engineer to multiply 3x2 in those days and he would have squinted at his slide rule and answered " About 5.98".  Nevertheless a rare disc shaped slide rule I still own was what inspired the design of my first CanalOmeters 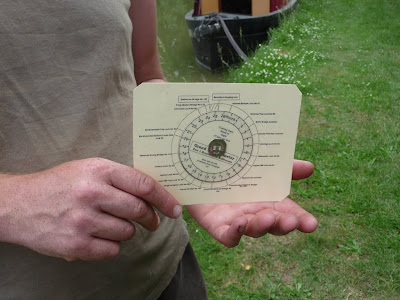 So the beautiful things we saw at the Whipple inspired me to consider whether I could make a more permanent CanalOmeter instrument instead of my laminated cardboard ones. Much as I love brass as a material I can't see myself engraving that with any style, so I've been hunting around for ways to make an alternative.  Now when say I intend to "make" something I use that word in the same way that Sir Christopher Wren "built" St Paul's cathedral.  So the idea is I do the design and commission the manufacture from someone with the requisite skills and equipment.

Hunting around on the internet it didn't take me long to find a solution at the website of https://www.sld-ltd.co.uk/.  They have a really good online design tool for engraved plastic notices etc.  You can layout your design to your heart's conchantment (a favourite word I picked up in an old Irish folk song) and see the cost add up as you add text etc.  Then order the finished article and they make it for you. Presumably they have some sort of computer engraving machine. The service is not dirt cheap if you have lots of text, but not prohibitively expensive for a special item.  Actually for a simple engraved plastic notice "Beware of the gerbil" or similar  they are quite cheap.  If you need a bespoke plastic sign for anything, I'd take a look at them. So I might go ahead with it, but first I have to choose a route to CanalOmeterise.  I'm currently researching the route between Great Haywood and Fazeley for suitable points to include, so that's a possibility.

And that of course might give you a clue to where Herbie may be moving to this spring.

Last night we had a long conversation with our scientist son Peter about what we should be doing, personally, about global warming.  He, alongside 55% of the UK population according to a recent survey, is extremely concerned about it. You may well think, after reading about the apocalyptic fires in Australia that 55% is a poor showing.  Peter reads up a lot on the science and has done some sums on the effects of sea level rise due to ice melt and the potential effects on our island nation are not pretty to say the least.

Anyhow, much as I distrust empty New Years resolutions, we've decided there is more we can do in our personal lives to limit our carbon footprint.  There are some very simple things such as stopping our current habit of just popping out in the car practically every day for a couple of items for dinner when we could a) walk or catch a bus and b) plan our shopping and meals better.  We could I'm sure do a bit more to reduce energy use at home. Then of course we could try to eat less food that has been imported by air (stuff like green beans from Kenya for example) and we could cut back even more on red meat.  These are small things but they do add up, especially if millions of people do them.

Now I'll get to the point.  What can we as boaters do to reduce our impact?  Sadly we are pretty reliant on fossil fuels, but here are some of our first thoughts.

Engine running - One good thing is that when we're boating, we're not using the car. Also  we have solar panels which help reduce engine running for battery charging, we have led lights and all that, but what else could we do?  Well, move less would be one option.  I reckon we could enjoy our boating just as much by lingering longer in pleasant spots before moving on, so when we're out boating for two or three weeks, we could spend more days stationary.  Of course I recognise that the live aboard continuous cruisers already do this, so good for them.  I think we're pretty frugal on electricity on board, so I can't see us making much of a dent in that, except perhaps set the fridge a bit less cold.  Overall though I reckon we should set ourselves a target of using less diesel. Would a reduction 25% be possible?

Heating - this is a bit of a worry.  Burning wood and coal is bad, not only for releasing CO2 but also form a polluting point of view.  My only solution is to wear more warm clothes and to refuel the fire less.  Maybe trying to keep the fire in overnight is not a good idea.  What do you think?  We do have three radiators heated by an Eberspacher diesel heater - would we be better to use that more?  It does use electrical power too though.

Then for us there are the journeys between home and the boat.  Hmm, not ideal then that we are contemplating a mooring further from home.  I think our answer to that will be to cut back on short boating breaks in favour of fewer, longer ones.

Then I'm running out of ideas, except for one thing.  If I can encourage someone else to make similar efforts then that doubles my result, and if they do, then it goes up again.  So how about it?  Two questions

1. Can anyone suggest further things we can do as boaters to reduce our impact on global warming?  I'm all ears.

2. Would anyone like to join us by spreading the message amongst other boaters?