When I made a box to keep windlasses, mooring chains and stakes etc last time, I should have learned the lesson from my first roof box - don't use plywood.  No matter how many coats of paint or varnish you give it, the outdoor life will eventually cause the plys to delaminate.  So it was with the windlass box, so I've had to make a new one, and this time, just like I did with the last roof box, which is standing up well, I've used solid wood. 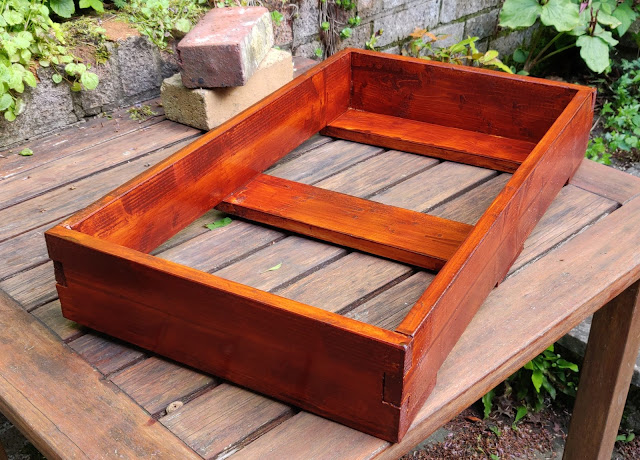 This time I even attempted crude corner joints - about the limit of my woodworking skills.  The box is shallow because it sits on top of the deck lockers at the back of the boat and the idea is that it can be sat upon without being so high your feet don't touch the floor.  'Where's the bottom of the box?' I hear you ask.  I have a bit of hardboard to do that. It just drops in and will no doubt need replacing every couple of years at best.  No big deal.  The box needs to be light as possible so I can lift it out of the way to get at the lockers beneath.  A few windlasses, chain, stakes and a lump hammer are quite heavy enough without the box being heavy.  And the lid?  That survives from the previous box, being made of a nice bit of 100 year old solid oak.  As you can see, I've whacked on a good few coats of Sadolin to keep the weather out of the wood.  As usual, the timber I bought from Wickes was somewhat lacking in the old straightness compartment, One piece being quite dishy across it's face, making a couple of the corner joints less than perfect.  I think it'll do the job though.

Now that the better weather seem to be on the horizon, we'll be off on our next boat trip next week.  I hope I can remember how to steer!

Quite a number of my readers will have met my (very) old pal Rick and some of them know that he is officially a brilliant engineer.  What that's what his boss said at his retirement do anyway. Not only that but he can mend clocks, build walls, make a Stirling engine, make seedy cake and jam, and a host of other intantorium things I haven't got time to mention tonight.   However today he excelled himself.  I invited him over to Herbie to see if we could start her recalcitrant BMC engine.  All it was doing was coughing and spluttering and giving the starter battery too much stick.

"What shall we try then " said Rick.  "Are the glow plugs working?"  "I very much hope so" quoth I, remembering what a pig they were to install when I fitted new ones.  A glance at the voltmeter showed it drop when I turned the key, which is always the sign that the plugs are taking plenty of current.  I pronounced them fit and healthy.

"I reckon she's not getting the fuel through", I suggested, and reached for the little ring pull on the fuel lift pump giving it a dozen or so tugs.  A tiny bit of diesel wept out of the top joint of the fuel filter.  "Well there's some there now, let's try her again"

The engine coughed and spluttered, hiccuped , coughed some more then hey presto she burst into song.  Ta daa!  So I suppose it was some air in the fuel line, probably caused by a weeping leak somewhere.  BMC engines, just like old British motorbike engines are not the best at keeping fluids securely inside.

I'm convinced that it was Rick's mere presence at the scene that made the engine decide to co-operate.  He didn't even lay hands upon her, but she knew she was in the presence of engineering genius.  Mind over matter.

Earlier in the day I had a miraculous result in fixing a water tap.  We have a little tap that dispenses filtered water and after a long winter's lack of use it had stuck open.  What a potential disaster that was.  As soon as I switched on Herbie's electric water pump, the little tap let forth a stream of  the precious fluid but the pesky thing wouldn't turn off.  You can hardly go boating with a water tap on all day can you?

I removed the knob from the top of the tap and set about trying to loosen the nut which gives access to the washer.  Would it move?  No. Hmmm. I supposed I would have to remove the tap and take it home to have a better go at it, or else buy a new tap.  Dejectedly I replaced the tap knob and gave it a twist and suddenly it worked. In fact it worked rather more smoothly than it has done for a year or two. Ours not to reason why, dear reader, but it's fixed anyway.  Job's a good 'un.

So a good result all in all.  Herbie is now reasonably fit to go cruising.  As soon as we get some half decent weather, we'll be off.