Whatever floats your boat

The kids are borrowing the boat this weekend.  I fear they may get rather warm.  Herbie is pretty well insulated but if the temperature rises like they're telling us, I'd rather be at home.  I think they plan to stay in the marina, which is not a bad idea as there are nice shady spots and electricity to run the fridge which will be working hard. You'd hope that the solar panels would keep it all going, but being adherents to Sod's Law, solar panels don't work so well if they get hot. Typical!

I hear that the feeder stream to the Coventry canal has dried up so CRT are stealing water from the North Oxford - just the thing that Sutton stop lock was there to prevent in the old days.  Hey ho. I suspect that we will be seeing lock restrictions before too long if this weather keeps up.  Shallow canals like the South Oxford, the Ashby and the Macclesfield are going to suffer.

I took a butchers at CRT's reservoir figures for June and quite a few of them are at or close to historic low levels. It looks like if you're looking to stay out of trouble, head for the BCN or the GU North.  The Lancaster is also OK but you'd have to get there via the Leeds and Liverpool which is not.

Hmmph!  I just received the latest Terms and Conditions from Aquavista our mooring meisters.  Talk about restrictive, I'm apparently not allowed to use firearms in the marina, and worse still I'm not allowed to annoy fellow moorers or use angle grinders in the middle of the night.  How woke is that?! The American Rifle Association are said to be up in arms.  (Actually I suppose they usually literally are!)

Actually the Aquavista Ts & Cs all look pretty reasonable and it was nice to see that they have included procedures for redress when/if the marina is at fault.  Something a Mr Johnson might to well to emulate.  Speaking of which:

Now over to the News:
Having been cruelly overlooked for the post of Chief of the Metropolitan Police, I still have time to apply for a vacancy I've heard of in a place called Downing Street.  Can I count on your support?  I hear other applications are coming in.  I've only read one so far, from Mr Tugendhat (I've probably spelled that wrong).  He seems a reasonable chap, but reading through his priorities, there is not a single mention of policy to deal with climate change.  It makes me want to weep.
I have ( really) today written to my local conservative MP urging him to choose someone who takes climate change very seriously.  If you would like to keep water feeds for canals from drying up (like the Coventry canal only this week) and/or prevent raging torrents in flooded rivers from washing boats away, I urge you to do the same even if like me you are not a Tory voter. It only takes a minute on email. It's not party political, it's survival for our kids and grandkids.  Actually I have this year written to said MP on a number of occasions, not only to keep him on his toes, but because he has to take the time and trouble to reply, it keeps him out of mischief.

Talking of the planet, now over to Summerwatch:

Yes, here we are in Wild Easthampstead Churchyard (just over my garden hedge and strangely, one of my happy places)

where we are on the trail of the elusive marbled white butterfly.  Sadly these creatures (and there are plenty of them here) are frustratingly hyperactive and won't sit still to be photographed but I did catch one hiding behind a piece of grass, oblivious to my approach. Gotcha! 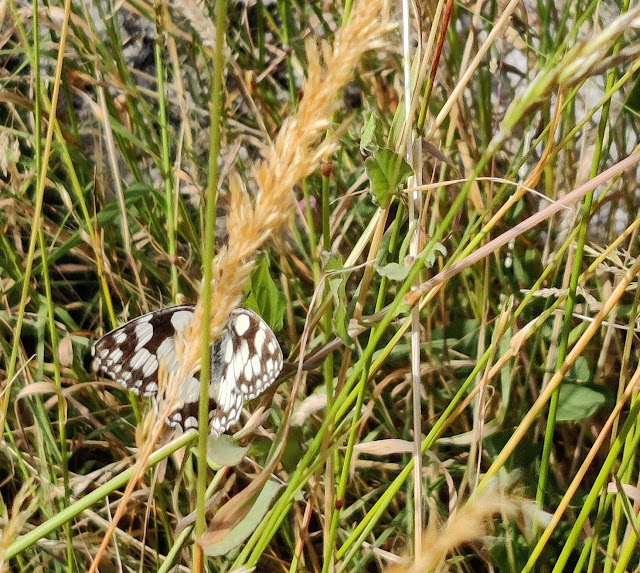 We're getting a good variety of butterflies in our garden this week, but butterfly educational standards are slipping and they don't appear to know that they are supposed to settle on my buddleia.   Birds are no better, our local nuthatch keeps coming to eat our mealworms.  The clue is in the name Mr NUThatch. Tsk tsk.
" Why not try our delicious sunflower seed kernels?" I ask.
People are saying that there are fewer bees around this year and judging by our garden, they might be right.  Any reader observations would be welcome.

Talking of grass, over the summer they let it grow long in the old part of the graveyard

This has the benefit of not only being very good for butterflies, moths and grasshoppers, but it also makes my back lawn look relatively respectable.  It's a win win.
Toodle pip.

Posted by Herbie Neil at 7:10 pm No comments: