Getting a fix of boating

Don’t tell anyone, but a week ago  we sneaked out under my doctors nose and took Herbie down to Banbury.  I don’t think we were spotted by anyone except Eeyore who was out on NbSonflower and he won’t snitch I’m sure.  Not that my doc need have worried because neither Kath nor I lifted a finger at the locks as we were crewed by grandson Jacob and his mate Ian neither of whom are strangers to the gym as their bulging biceps will testify.

You can’t keep us away from the water, and this weekend just gone was our annual trip to the Norfolk Broads.  Sadly I had to admit that the stressful process of hurtling down a river in a little boat in strong winds, far from a phone signal, was probably not a good idea for someone with angina so I stayed ashore while the others went out.  The family honour was maintained as we had brought along Jacob to crew on our behalf.  Although he has done little sailing in his twenty one years, he has been weilding a narrowboat tiller since he was eight so he managed well. Not to be outdone we did jump in the car and visit a few favourite waterside haunts – Womack staithe, Potter Heigham bridge, and more staithes at Thurne and Upton.  At Upton (near Acle) we waited patiently for the return of our pals as they brought their boats back to base propelled only by the wind in their jib sails as they came up the little channel. 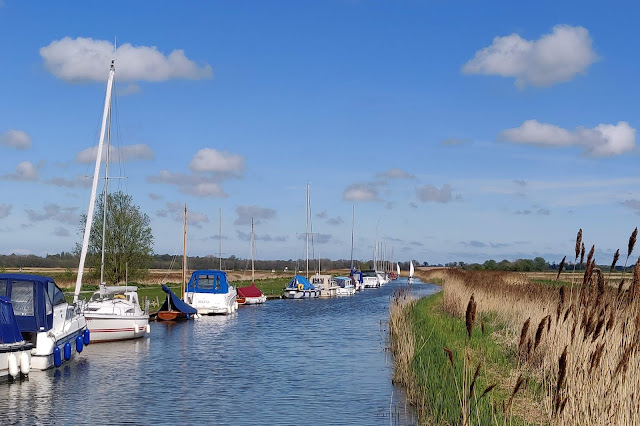 At Potter Heigham we had a treat as some men were refixing a warning sign on the notoriously low bridge so we sat and watched as we ate our lunchtime baguettes. 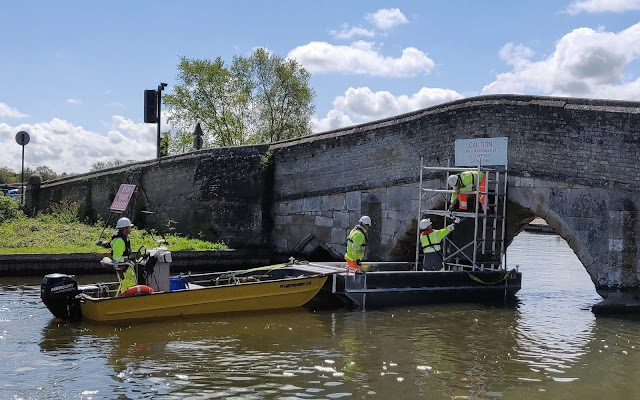 Anyone who knows that bridge will know that the tide rips through it at a rate of knots, so the man in the boat with the outboard motor had to hold them in place while they worked.  Unfortunately no one fell in, so it was not quite as much fun as it might have been, but quite entertaining all the same.

It’s only eight days now until my hospital procedure which I hope will restore me to some sort of fitness.  I went to a “pre assessment” appointment last week when they showed my some typical stents like the ones they might fit if they find a good place to do it.  There ain’t much to them, they look like they probably cost ten pence a dozen – about the size of the little springs you get inside retracting ball point pens, but much flimsier.  I can’t wait.
Posted by Herbie Neil at 2:08 pm 5 comments:

I have to tell you I’ve lost something significant, but I don’t want it back.  More of that later.  Meanwhile last weekend we took Herbie out on a cruise.  ‘Hang on’, I hear you say,’aren’t you supposed to be grounded pending treatment for your angina?’  Well yes I am but we threw caution to the wind and cruised all the way to this spot: 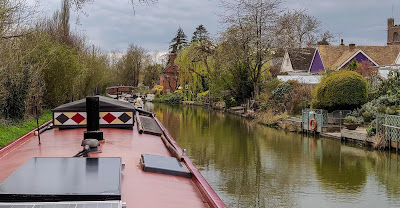 Cropredy lock.  It took us all of five minutes to get there from our berth at the marina and it was worth it because we’d arranged to rendezvous with the Moomins (aka Simon and Ann on Nb Melaleuca), so we spent a couple of jolly evenings eating and drinking and talking about batteries and toilets, like you do.  Melaleuca now has lithium batteries and a fiendishly clever battery control system devised and installed by Simon.  I wouldn’t know where to start – Simon’s brain works on a higher plane than mine.  Nevertheless now that the days are longer, Herbie’s solar panels are earning their keep and our conventional batteries held up well, losing only 15% over 48 hours of fridge, lights etc. If there is anyone out there who doesn’t have solar yet –get on with it. It’s a no brainer.  Interestingly, I did a quick survey of boats in our marina and I reckon that less than a quarter of them have solar panels.  I think that’s because lots of them never go anywhere. They just sit there plugged into the mains and quietly get eaten away by galvanic corrosion.

I’ve now got a date (8 May) for my medical ‘procedure’ which I hope will include fitting a stent or two.  According to Oakie I’ll feel like a new man.  Kath say’s she’s felt like a new man for ages.

The thing I have lost as of today (see para one)  is a stone in weight since all this heart thing started a few weeks back! Hooray.  You may congratulate me. No faddy diets, just portion control and cutting out fats, sugars and alcohol (I allow myself a drinky once a week – well twice last weekend ‘cos we were dining with the Moomins).  Now I need to lose another stone- stay tuned.
Posted by Herbie Neil at 5:29 pm 4 comments: