Facts about Foraging for the Front in the Great War

Lots of us canal boaters enjoy a bit of foraging from the towpath hedgerow, blackberries especially, but also crab apples, occasional damsons, maybe some elderflowers or elderberries if we’re wine makers.  On our September cruises we have blackberries in our breakfast cereals most days and often some blackberry and apple for pud in the evening. So for all you foragers out there, here’s some stuff you didn't know about foraging in WW1, and it emanates from the Worcestershire village of Badsey where I was “dragged up” as my mum used to say.

Apparently such were shortages of fruit and veg  etc at the Western Front that the government encouraged the enlistment of child labour (over 12 years old) to help on the land, exempting them from school if their agricultural parents so wished. Even younger children were utilised in collecting wild fruit and plants.  Children from Badsey school( despite having a “Town Class” narrowboat named after it, Badsey is merely a village,so the school isn’t big) collected 500lb of dandelion roots for medicinal purposes in 1917 and somewhat more the following year. Also in 1917 the children of the school collected a quarter of a ton of chestnuts which were send off to produce acetone which was needed in order to make cordite for ammunition and artillery shells.Then 1918 the kids picked over half a hundred weight of wild blackberries(for which they got paid 3d a pound) to send to the local jam factory.  The total weight of blackberries foraged by Worcestershire schools in that year was a staggering 53 tons! Good effort kids!

There were growing areas where the kids had to be kept well away. Here the villagers were growing the highly poisonous plants Belladonna (deadly nightshade) and Henbane, both needed for medicinal purposes at the front. In 1916, the village’s land devoted to growing belladonna was no less than 11 acres and by the end of the war the village was supplying a fifth of the country’s requirement for belladonna and a quarter of that for henbane. A bit scary when you consider that all parts of these plant are highly toxic and that swallowing as little as three belladonna berries could prove fatal. One of the ladies employed in picking the leaves was my grandmother Emma. She lived on for another 27 years after that so it looks like it didn’t harm her any.  The leaves were dried in disused hop kilns in the adjacent hamlet of Aldington.

“How do you know all this stuff?”, you ask.  Well it’s all in a wonderful book called Peace,War and Remembrance – The Great War in Badsey Aldington and Wickhamford.

The author, historian Maureen Spinks sent out a request for village people to send in any photos, documents etc about the time of the war and from it she has compiled this very impressive work. A finer description of a village in war time you will never find. 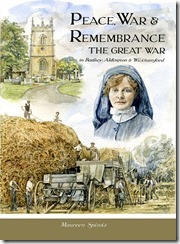 My big bro Graham and I sent in some bits that found their way into the book, but from old records, Maureen has uncovered other family bits that we didn’t know about including the bit about Granny picking belladonna.

How long can you hold your breath? When I was a lot younger I could swim the length of a 50 metre swimming pool under water, but not now of course.  however, today I held my breath for what seemed half a lifetime while the BSS(Boat Safety Scheme) examiner checked Herbie’s gas system for leaks.  In the previous two BSS’s we had had problems with a tiny weeny leak somewhere around the pigtail lead in the gas locker.  Almost impossible to locate and hence almost impossible to fix, except by  tightening and retightening joints.

This time the man connected his digital manometer (I think that might be a contradiction in terms if I‘m being picky) to the test point and we waited for what was supposed to be five minutes but was in fact nearer ten because he was nattering about ventilation.  I was sure we’d have the same problem this time, but, hey, whaddya know?  The pressure held rock steady and we passed the gas bit. Hooray.  I breathed again.

The ventilation rules are interesting.  You’re supposed to have enough air vents (that includes ceiling mushrooms) to allow the ingress of sufficient oxygen to keep up with all gas rings, oven, grill, gas water heater if you have one, your wood/coal burning stove plus one person for each berth on board(that’s four for us) – all at the same time. I think if we had all that on, we’d be opening doors and windows because it would be so hot! We’re a bit marginal on vents but in real life we always open hatches etc when it gets stuffy. and anyway the ventilation specs are only advisory.  What we do have is two carbon monoxide (or as Kath likes to call them, monosodium glutamate) detectors, which we reckon is more important.

Anyhow after checking that lot and the fire extinguishers and diesel fuel lines and electrical wiring and gubbinses etc. it seems we are deemed  safe again, so now we’re 170 quid poorer but certified for another four years.  As it happens, a lot of people think I ought to have been certified a long time ago.