An alarming breakdown and a chance meeting with the guv'nor

We were on our way from Iver to Paddington basin to collect our son Peter for a week's holiday cruise. Pete Higson, our "regular" crew member was with us as well as Jake the cabin boy. All went well down to Bull's Bridge where we moored at Tescos for provisions and a spot of lunch before turning up the Paddington Arm of the GU.

It was a nice day, and we were idly pondering the voltmeter readings on the instrument panel when we could hear a squeaking from the engine compartment. Lifting the lid we were greeted by a cloud of smoke, so we immediately turned the engine off and pulled over. The smoke was coming from the stern gland where the prop shaft goes through and we could see the grease melting and frying! This looked like big trouble. A quick call to River Canal Rescue got an engineer on his way, although our discussion over the phone with him was depressing. He feared it might be an "out of the water" job.

Then we had some uncanny good luck. Who should cruise past but well known boat maintenance trainer and guru Tony Brooks, whose course I attended earlier this year. Seconds later he was under the bonnet and spotted the cause. The engine mountings at the prop end had worked loose and the engine had dropped so that its weight was borne by the prop shaft. Tony elected to leave it for the RCR man to fix, but phoned them up to offer his diagnosis. He was right of course and it took only a few minutes for the RCR man to bring the engine back up to its former position and tighten the stern gland which was now leaking water. Before Tony left I also discussed the oil leak which has been plaguing us and he spotted that the oil was coming from where the oil pressure relief pipe comes out of the block. "You'll need to change the copper washer" he said.

Meanwhile poor old Pete, who was only with us for the day, elected to take advantage of the nearby tube station to get home, and so missed the rest of the trip to Paddington. Kath and I elected to stay put for the night as it was too far to Paddington to make it before dark and anyway we were very close to the Black Horse pub, which looked inviting. It turns out to be a good stopping place because the food and the beer were excellent.

Next morning we had a smooth run in to Paddington to meet Peter off his train. One amazing thing we saw, whilst crossing the North Circular aqueduct, was a huge (and I mean huge) cavalcade of motor cycles below. Apparently it was a rally called Kill Spills to demonstrate about the dangers to motor cyclists of diesel spilt on the road by lorries and they were hoping to have 5000 bikes there. We didn't count, but it was a hell of a lot! The whole North Circular seemed chock ablock with bikes and of course we could hear the roar over everything.

Here we are coming into Paddington to collect Peter from the station. 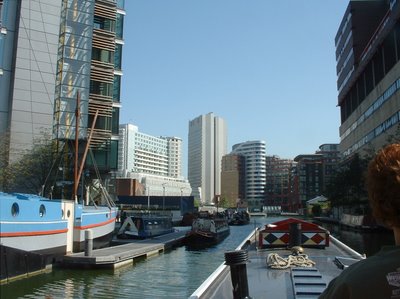 That done, we set off back the way we had come. The sun shone and the cabin boy poured the beers as we passed through Little Venice. 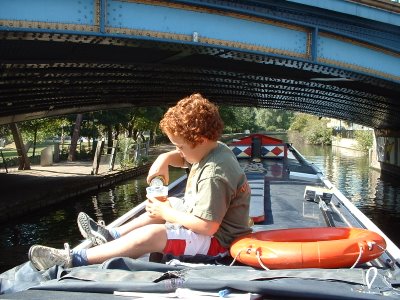 We finally moored for the night at Cowley in pleasant surroundings and had a meal at the Malt Shovel. Jacob by now had been collected by his mum for school next day.