They say things come in threes. Well, they did in the last couple of weeks. Three totally separate cat related events. The first was amazing, alarming and somewhat stressful.
In the gales we lost a tile from the roof at home and because it was out of sight from the ground, we didn't know until the rain started dripping though the landing ceiling. A quick nip up to the loft spotted the hole and later that day the tile was replaced. End of story, or so we thought. It wasn't until a few days later that we heard a cat meeowing and scratching over the back bedroom (which has a flat roof).
Next evening we heard the same and it became apparent that the cat was somewhere in the loft, although a search through all the boxes and stuff revealed nought. Then I spotted some cats poo on top of the loft hatch. It must have got in when the tile was off and became trapped when it was replaced.
Next time we heard the noises we could tell it was not in the open part of the loft but behind the plasterboard in the void over the stairs. A search with a torch revealed how the pussy had tunnelled through the fibreglass insulation down into the void. Here you can see the tunnel. 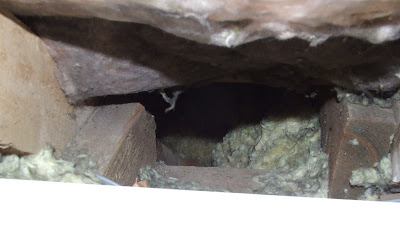 We had visions of the poor thing starving to death and me having to cut holes in the wall to retrieve the body. Calls to the RSPCA were disappointing to say the least. I have to say we were not impressed by their lack of response. They seemed more interested in getting my name for their fund raising mailing list. Suffice it to say I shall not be making a donation.
Anyway, we put a nice smelly tin of tuna in the loft and next morning it had all gone. So at least we knew the cat was able to move about and we could keep it alive. It was now over a week since the tile had been replaced and still we hadn't seen the cat, although every night it made a racket and ate our food, and every day it went quiet. We left the loft open with a ladder in place constantly, but to no avail. Then, on Thursday, twelve days after the incident began it decided to show itself at the loft hatch, meeowing loudly. With a piece of tune in one hand to entice it, several attempts were made to grab it until at last Kath managed to seize the cat, receiving a nasty scratch in the process, bring it down. It was a sizeable tabby and despite our fear, it looked in good health although it was obviously hungry. Here it is on our doorstep. I turns out it belonged to a neighbour round the corner who was used to it disappearing for days at a time. 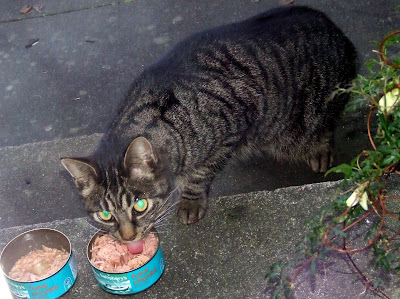 The second cat belongs to a boat which moors near Herbie. It paid me a visit yesterday when I was aboard and wouldn't go away. Not that I mind a friendly cat, but after our recent experience I didn't want to inadvertently trap it aboard Herbie when I locked up and went away for a week! Every time I put it out the back door it would sneak back in the front. Needless to say I did a thorough search before locking up.
Finally, our new ship's cat for Herbie. No problem this one, it just lies there curled up. Well there's not much else a cat made of cardboard and rabbit's fur can do. 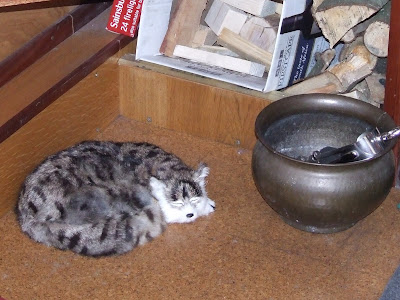 This one is a copycat, being a replica of the famous Mrs Chippy, the cat that accompanied the Shackleton expedition to the South Pole.
Posted by Neil Corbett at 11:44 am