I've been painting at the front of the boat and am now ready to put a pattern on the vertical centre board of the cratch window. I know I want to do diamonds to match the roof box, but there are options. Here are four ways. 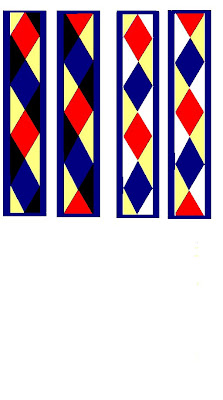 The only difference between the first two and the last two is the use of black instead of white, yet how different the pattern looks. Should the top start with a half diamond as in the right picture of each pair, or a whole diamond as in the left hand ones.

Well according to the books, a half diamond at the top is the traditional way. Its all very well to be aware of the traditions, but I don't have a lot of time for boaties who get sniffy about it. If you have a proper working boat then of course you want it right, but so many so called traditional boats are no such thing. Is it "traditional" to have a fridge, a toilet, hot water? No.

I'll probably opt for the half diamond though because it looks better, and probably the white rather than the black because the diamonds stand out better (and the colours will match the roof box).
Posted by Neil Corbett at 6:13 pm