Poor old David Walliams had a tough time swimming the Thames didn't he?  Although the Thames is supposed to be clean these days, it was clear from his experience that there is still enough pollution around to make you ill if you fall in.  Pollution  and low water oxygen levels go hand in hand, so it was interesting to see this boat when we were on the tideway last week. 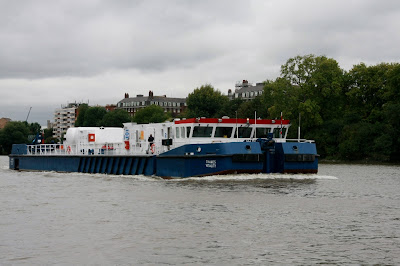 They tell me it's an oxygenating barge.  I never knew such things existed, but it looks to be a serious piece of kit.  Apparently this has been going on since 1989. A quick check on Google reveals that they have two of these boats.  This one, Thames Vitality, plus another called Thames Bubbler.  That might give a clue to how they work, presumably by blowing oxygen bubbles into the water.  It seems that these boats are deployed as needed in order to protect fish and other marine life when  oxygen levels reach low levels.

By the way, following my scary picture of Nb Leo's bow dipping into the water last week I heard from her skipper Kathryn who revealed as I suspected, that standing 60ft away on the stern she had no idea how dodgy things were up front.  If she had, she might have closed the front doors!

Here's another photo taken at the time.  I guess she faced at least twenty such waves. 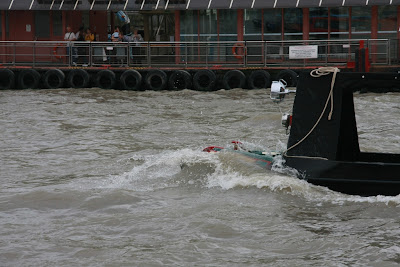 Leo,  who Kathryn tells me was built by Orion, has lovely lines and I reckon that although the bow and gunnels are low to the water, the good shaping of the bow kept the water away from the well deck as I think this photo shows.
Posted by Neil Corbett at 11:40 am

I never touched it!

I suppose ignorance was bliss and I am sure Neil is correct in that the design helps so much - well done Richard at Orion. I do now have a 23 × 33 (inch) canvas print on my wall at home to remind me what can happen and that I should close the doors next time. On the way home on the Sunday we did get a wash run down the side of the boat about 6 inches above the side decking - the boat dealt with that as well but one has to bear in mind that the boat was designed to look as near as possible to laden working boat - that's why it is so low compared with others.

Interesting idea - the oxygen boat, I mean. The nearly submerged NB looks scary, but then when you see fully laden barges that look as if they are practically under water, you realise they are designed to take it.

what a lovelt informative and entertaining blog :D