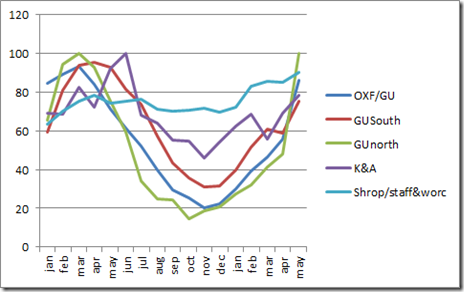 This is what we've all been waiting for (well nerds like me anyway) – the latest reservoir holding figures from BW.  Out today, and what a change!  Generally speaking, we’re now better off in water supply terms than a year ago, with the notable exception of Grand Union South which is still 17% lower than last year!

Poor old GU south.  despite the wettest April for 100 years, it still looks gloomy for them, as I noted when we visited Marsworth reservoirs recently.  I think the problem they have is that the ground water levels there are low and the geology near the surface is porous.  Much of the Chilterns are chalky.   Should the summer be a dry one, they are in real schtuck.

Contrast with the Saddington reservoir which feeds GU North.  In just one month it has increased its holding from 48.2% to 100%!!  yeeehaaah!

BW claims that the 30% increase in holdings on the Oxford/ GU section is partly due to the pumping schemes they introduced such as the one we saw at Welford where water was pumped into the reservoir from the 20 mile canal summit pound.  Whatever the reason, we can now go boating again with a clear conscience.

Well the trick now is for BW (soon it’ll be CRT) to hang on to this water so we don’t lose it all again.  They do seem to have been putting resources into repairing leaky gates etc. but there are still plenty more to do.
I can’t help feeling sorry for those boaters who, wisely at the time, forsook the canals for the rivers earlier this year.  Now they are trapped on flooded rivers while many of the canals seem to be returning to normal.
Posted by Neil Corbett at 1:21 pm