The voyage of the Humbug

The scene outside of Uxbridge boat centre is chaotic at the best of times and this morning was no exception. 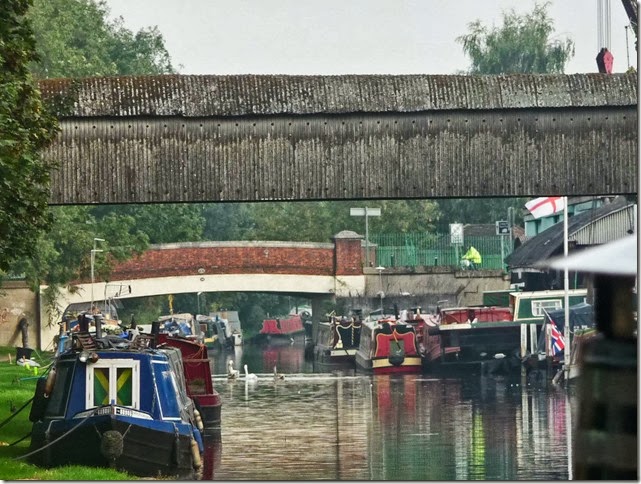 I was there to help our ex next door berth neighbour Glyn to manoeuvre her lovely old 55ft Springer Humbug into the dry dock.  Glyn lives aboard but has never done much cruising and is not confident to drive the boat solo.  At Uxbridge there are always boats everywhere, along both sides of the canal, strewn around the slipway and craning dock, piled up on shelves in the sheds etc. Humbug was going in alongside Capercaillie which belongs to Glyn’s current neighbour.  They are doing their blacking together this week.

After waiting for an hour while the boatyard shifted various boats out of the way, Capercaillie went in first and then we followed, to fit in the narrow slot alongside.  It would have been a lot easier had three boats not approached from the opposite direction just as we had to execute the right angled turn into the shed. Anyway we got in without incident and the boatyard guys started the complex job of sealing off the dock and pumping out the water.  I was going to stay until the boat had settled on it’s rests until the man told me it takes three and a half hours to pump out the water! 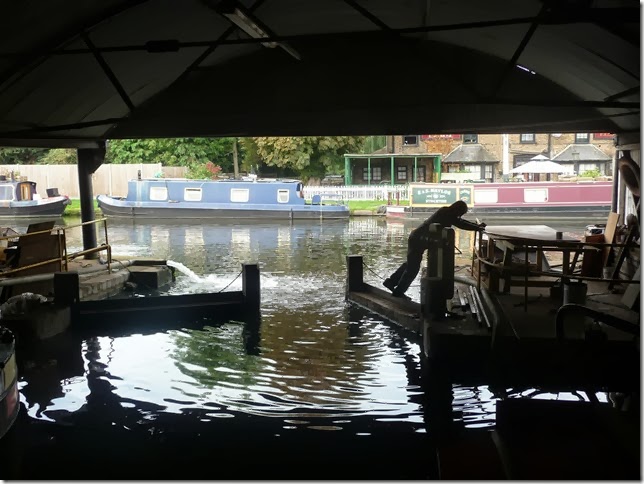 Two minutes after that photo was taken they had moved a couple of boats back outside the dock and we were well and truly trapped.

We made the trip up the Slough Arm from Iver yesterday afternoon and I’m pleased to report that we encountered no weed!!  None at all. This was the first time I have ever steered a Springer, noted for their V shaped bottoms, and I was pleasantly surprised at how well Humbug handled.  Glyn, who despite having lived on a boat for seven years has never operated a lock unaided, so she was well pleased to find that Cowley lock was manned by CRT volunteers.  Strange that she is a dab hand at boat DiY, having performed all sorts of miracles on Humbug, electrics, plumbing, painting, yet she is very nervous when it comes to cruising.  I think last night was her first experience of mooring on the public towpath.

Glyn will be putting Humbug up for sale in a few weeks.  If anyone is looking for an inexpensive yet  comfortable and delightfully decorated and cosy boat with a residential mooring they could do a lot worse. And it’ll have a newly blacked bottom.