VLKs aplenty but a stretch for VTRs.

“What’s a VLK?” I hear you ask.  A Volunteer Lock Keeper of course.   I met a load of them last night at a BBQ put on by CRT as a thank you to all London region volunteers.  Judging by their numbers, lock keeping seems to be the most popular volunteering job.  I wouldn’t mind it myself if I could commit to a regular day, which I can’t.  I heard someone at Braunston this year refer to VLKs as Professional Gongoozlers, implying I suppose that they often don’t seem to help when you need them.

Down on the Hanwell flight at the bottom of the GU, you are likely to get good service by the sound of it.  I met a couple of the Hanwell guys last night. As you may know it’s a pleasant enough flight but quite hard work and many a prop gets fouled by the large numbers of plastic bags that seem to gather under the water thereabouts.  I was amazed to find out that the VLK team at Hanwell now numbers about 13!  Not all on duty at the same time of course, but you should always find a couple there.  I’m told that they display mobile numbers by the top and bottom locks so you can call them if you can’t see them when you arrive.  The ones I met were the Wednesday team and they said they work the year round, so I look forward to calling on their services next winter when we may well take a trip down to Brentford.

Us Volunteer Towpath Rangers are much more thinly spread.  Due to changes in roles at CRT we have now been divided up into five teams in the London Region and I have been appointed as Obergruppenfuhrer (well, Lead Ranger they actually call it) of the West team. This gives me no power whatsoever, but a few extra organising and co-ordinating duties.  Including  me there are but four of us covering the GU between Brentford and Ricky, the Slough arm and a bit of the Paddington arm too.  The good news is that shortly we will be released to run our own affairs and hold our own meetings and recruit further volunteers etc.  CRT have been somewhat tardy in supplying us with some of the kit and the final Risk Assessment training we need, but after bending someone’s ear last night I think we may be back on course soon.  Nuff said.

I think I wrote before about the Share the Space campaign going National.  Dick Vincent, who has up until now been in charge of us has been seconded to the national campaign with what sounds like a reasonable budget to try to do something about getting towpath users to be considerate to each other.  He will be training staff and towpath volunteers in the regions. The main culprits as we all know, are speeding cyclists and irresponsible dog owners, and I’m glad to report that they both problems are referred to on the back of the redesigned maplet cards we give out at Share the Space events.  Better still, there is an encouragement to give way to waterway users, i.e. boaters at locks and bridges etc. 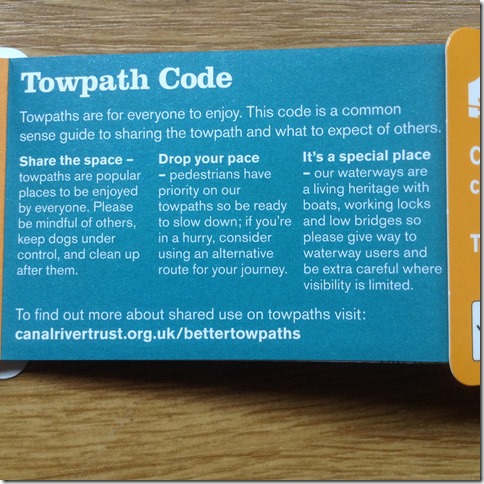 These little fold-out cards have cute maps of the local canals, so may well be held on to by towpath users of all types.  At the moment they only exist for the London region, but Dick’s budget allows for other regional versions to be designed and produced.  Click on this one to see it bigger: 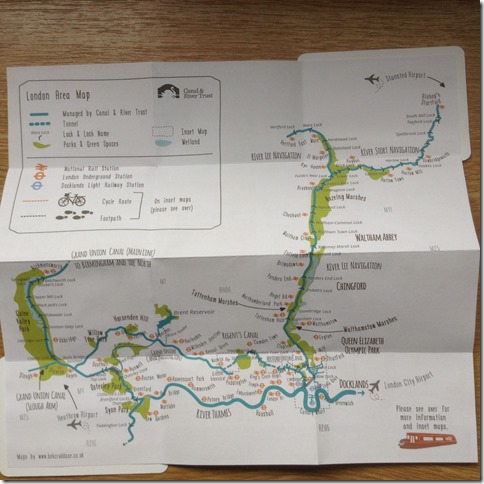 And the BBQ last night?  Very good actually.  Some people failed to show up because the Met Office was warning of Thunderbolts and Lightning, Very Very Frightening, and a dluge, but in the end we didn’t get a drop or rain or electrocuted.  The upshot of the slightly lower numbers was an excess provision of food and booze.  I did my best to help out and woke with a slightly fuzzy head this morning.  Always keen to assist, that's me.

If you fancy doing a bit of towpath rangering they’ll be recruiting all over the network before long.  Either go via the website, or if you like, I’ll pass your details on.  The time commitment is quite small.