London canals – this and that

In the course of my volunteering duties I’ve been up to “the smoke” a couple of times in the last week, once to Little Venice and once to Enfield Lock.

The whole LV area is suffering with duckweed infestation to a level I haven’t seen before. The actual leaves of the weed seemed to have grown to more than  twice their normal size too. The worst bit is under the bridge at the entrance to the arm up to Paddington basin.  Here they’ve installed one of those bubble lines like they use up the other end.  It does form a barrier to the weed , but the stiff sure does pile up behind it. Yukk! 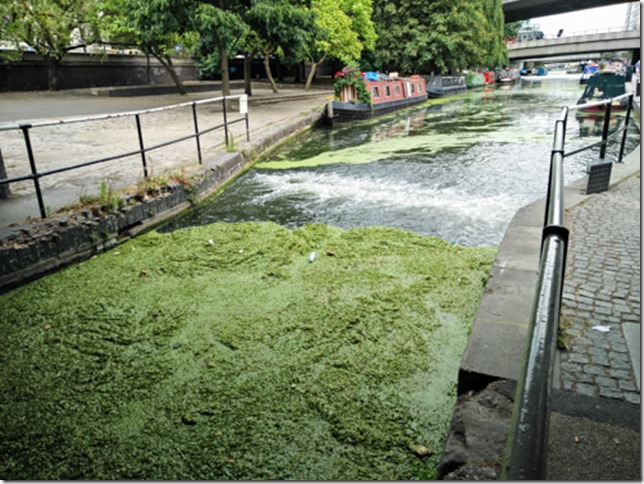 When we emerged from our ranger meeting at the LV office, (we meet in a basement room five feet below the level of the canal outside!) we were confronted by this scene: 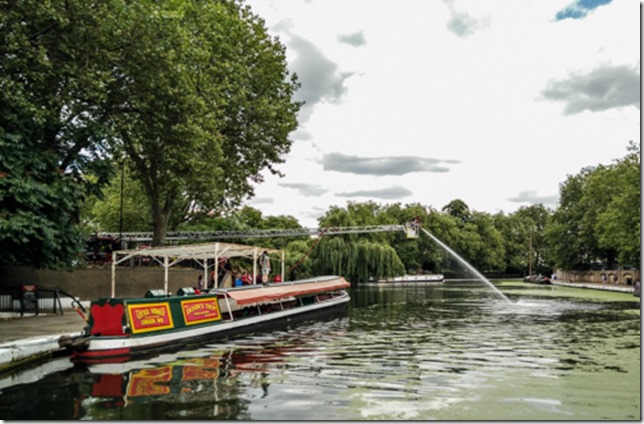 At first, we thought “Ooh that's clever, they're clearing the weed with a hose”.  But when they stopped shortly afterwards, it was clear that it was just some sort of Fire Service training exercise.  I was impressed with how that long cantilevered arm kept straight under the load.

Up on the arm towards the basin, a weedcutter boat was doing its bit, but I fear that in this warm weather it’s a losing battle.

“What were you discussing in the bowels of the CRT office?” I hear you ask.  What else, dear reader but flippin’ cyclists.  We were reporting back on our towpath experiences of an inconsiderate few who seemed determined not to take notice of our “now then, be nice to each other” approach. Not all of our suggestions seem acceptable to CRT. Apparently tasers are not standard issue to volunteers for some reason. Next year we may see another relaunch of the Share the Space campaign with a stronger emphasis on cyclist speed reduction.  Us Volunteer Towpath Rangers would like to have some physical impediments to speed at danger points and more explicit guidance to cyclists about safety behaviour around pedestrians and boats.  Watch this space.

Yesterday up at Enfield Lock I had a jollier time in my volunteer Boat Mover capacity, being given a familiarisation session on a type of CRT boat we hadn’t used before.   There are so many different types of boat used by CRT, I might suggest that anyone who has finished train spotting might turn to CRT workboat spotting.  I wonder if there’s a catalogue of them all somewhere. I might even take it up myself.

While I was there I picked up a little bit of info about plans for boating round the Olympic Park.  At present this loop of water is only opened to boaters on organised occasions with special permission.  Recognising the interest in taking a boat around the loop, there is some consideration of having more frequent opening for general enjoyment without pre arrangement at some time in future, but not allowing mooring, and clearing the area of all boats at the end of the day.  No decisions have been made yet, these are just current thinking.

Up here in Sawley they have installed the glue down speed bumps, which seem to do the trick.

The trouble with the speed bumps is that unless they are placed very sensitively (and there's often not enough room) they are _extremely_ uncomfortable to a large number of wheelchair/mobility-scooter users. There's a fundamental conflict here, in that what discourages cyclists from speeding (bumps and barriers) also discourage mobility-aid users from enjoying the towpath.

Giles, you're right, which is exactly why CRT are reluctant to install any speed bumps or gravel traps etc.

I also noticed the manic cyclists when we were in London a few months ago. They seem to have no imagination for what might go wrong on some of these stretches where people are walking or boaters are mooring up. I came close to being hit myself, so foreign visitors walking who aren't familiar with the speeding pedalists are also at risk. What about chicanes? Widely spaced enough to make it easy enough for wheelchair bound people to negotiate but close enough to make the cyclists slow down.

Val, yes some of the Rangers favour chicanes, but of course they only work for a few yards. Other ideas include gravel traps, gates etc. At present CRT is reluctant to deploy physical barriers of any kind for various reasons