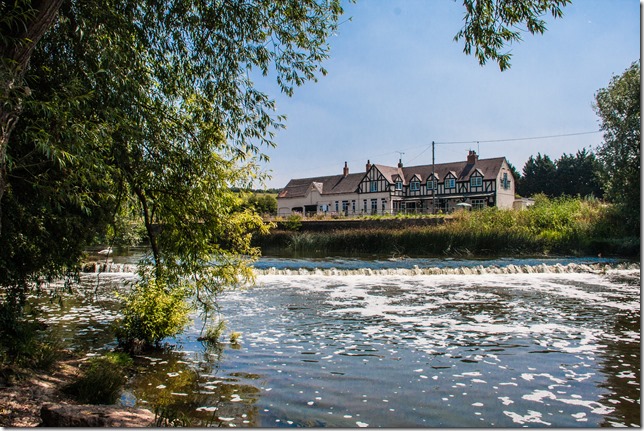 When I were a lad, for several years I spent virtually the entire summer standing in the middle of this picture. It’s the ford across the river Avon by the Fish and Anchor pub at Offenham.  Nowadays there’s a lock cut a few yards to the left of this photo, but there was no navigation in those days although as far as I recall, boats had been invented.  As you can see, the river is shallow at this point, even below the ford it’s only a couple of feet deep.  The oxygenating effect of the ford brought the fish into the foamy area and I was there trying, and mostly failing, to catch a few.  We would take off our shoes and socks and roll up our trouser legs and wade out across the ford,  slipping and sliding on the cobble stones which were covered in silk weed.  How we never fell in, I’ll never know.  The silk weed was very comforting once you got to stand still, rather like standing barefoot on a sheepskin rug.  The weed itself held an abundance of tiny larvae and wotnot which of course the fish would like to eat. We would drag our bare fish hooks through the weed to pick up a bit of it, then cast it into the foamy race below.  The current is pretty swift there and in a few seconds our fishing floats would be thirty yards downstream as we squinted our eyes to see them.  As I said, I never caught much but I didn’t care. It was a lovely place to be.  In the eddy between the ford and the tree to the left of the picture, gangs of marauding perch used to swoop on the shoals of minnows that huddled there, and once I saw a creamy white pike (albino??) about three feet long, just lazily hanging about in the shallows. It was like a ghost.

Jump forward fifty years and I think it’s the same type of weed that tries to grow on edge of the boat’s baseplate like a little whispy beard.  At Bulbourne on the GU I’ve watched the carp grazing along the side of the boats, presumably more interested in the larvae than the weed itself, and of course ducks do the same don’t they?

I used to lie in bed aboard Herbie in the early morning and hear what I thought was scampering on the roof.  For a long time i assumed this was the pitter patter of rodent feet as they scavenged for a bite to eat.  Only in the last year or so have I realised that it isn’t that at all.  It’s the ducks pecking along the water line picking off the weed, I suppose that makes it some sort of symbiosis.  They get fed and the boat gets cleaned.  Down the old Slough Arm, the boats at High Line Yachting suffer badly from the weed, they have beards worthy of ZZ Top, most of them, and thinking about it I don’t recall seeing many ducks down there.  Maybe I should suggest that they import a few.

On our very first night on the boat we were woken at about 3am. Scary thoughts went through our minds, until we realised it was the mallards feeding on the weed on the side of the boat. It's now just one of those comforting boating noises.