Plenty happening where nothing ever happens 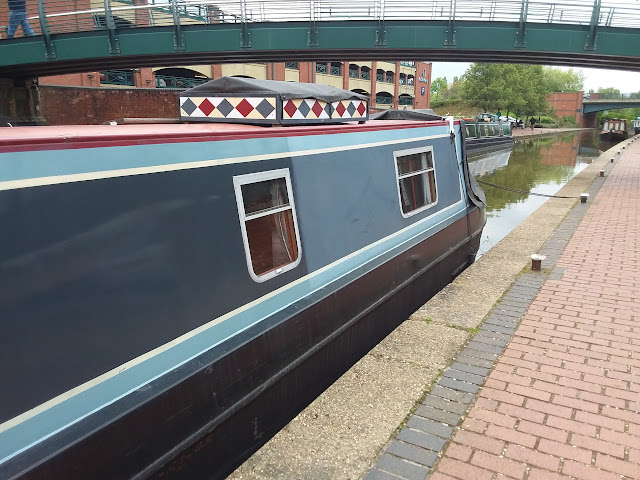 Look at this. Can you tell where I ran out of wax polish? Of course you can. It's quite striking isn't it? That's Craftmaster for ya.

We're back in Banbury having had a very good trip down to Heyford and back. We all know it's been cold this week, but during most of our cruising it's been sunny and the countryside is looking gorgeous. Funny how we set off, just the two of of us, and ended up having quite a social time. On Wednesday we caught the train from Heyford into Oxford to see Julius Caesar. Turns out we were 2050 years or so too late of course, but there was the Bill Spokeshave play about him being broadcast to the Odeon, so we satisfied ourselves with that. Typical Spokeshave play, dead bodies all over the stage at the end and I get distracted by wondering how they get all the bloody costumes washed and ironed before the next performance.

Earlier, while we were strolling among the dreaming spires a text came in from dear old / (young actually)Mort Bones simply saying "I spy a Herbie". Well we had left the boat just up the path from her famous barque. Sadly we were out cavorting until very late, so we agreed to meet up aboard Herbie for a breakfast cuppa at 8am next morning. Even at that early hour she arrived bearing cake. What a star! We do like Bones.

Sadly, we had to depart all too soon because Rick and Marilyn had arrived to crew us back to Banbury and we needed to get there in time to plan an assault on the Reindeer Inn quiz that night. Next time Bones we'll plan a proper do.

We did alright at the quiz, but not good enough to get in the prizes. Frustratingly, the quizmeister admitted that he had planned the music round to be on 50s and 60s stuff. We would have cleaned up! But he changed his mind that day and played 90s
Indie tracks instead. Bad oh. We managed to recognise Blur, Oasis and Pulp between us which might be more than you can expect of old farts like us, but anyway it wasn't enough.

Then today came a knock on the boat and auld acquaintances from home Bob and Fran off Nb Song and Dance appeared out of the blue and so we all had tea. So our quiet "just us two" cruise had turned out to be a lovely week meeting friends. Good innit?

Tonight I embarrassed myself by tripping over a kerb outside Tesco Express and falling flat on my face on the pavement. There was a loud bang as the big bag of Kettle crisps I had just bought burst under my prodigious weight. I'm comforted to tell you that several kind young folk emerged to help this poor old bugger to his feet. I suspect that they thought I might have had one too many sherberts, but I assure you that I had not. I just tripped. Honest. The crisps were still edible but somewhat crushed.
Posted by Herbie Neil at 11:04 pm

There's so much to comment on in this pos...so here goes! Well done on the polishing, bad luck on the quiz and so glad you weren't hurt when falling. A lovely week on the whole!

How prescient of you to be equipped with an airbag for just such an eventuality.

And just what was in that tea?