The tale of a piece of wood

This little history does finish up with something about Herbie, so bear with me.

Many many years ago when I was young and slim I had a friend called Paul who was moving out of his flat.  In this flat was an old pedal organ which he had rescued from a skip when a church or chapel was being demolished in Henley-on-Thames.  Not having room for it in his next place, Paul was getting rid of the organ, So I bought it off him for £4 plus some other bartered object I now forget.

It was a fine old instrument, made by the Bell Organ Co of Canada. I can’t find a photo of it, but it looked very similar to this one which I saw for sale on the net at one time.

The carcass was of the finest solid oak, some of it an inch and a half thick! It had fine panels and quite a lot of intricate carving.  Complete with it's ornate cast iron rimmed Patent Mouseproof Pedals, it was a joy to behold –maybe not in a modern Habitat furnished house, but it was a fine thing in itself.  Inside the organ however was a somewhat different story and it appeared to have been made out of clothes pegs, lollipop sticks and coat hanger wire!  It did however have several rows of tuned brass reeds, most of which were intact.  The webbing that attached the big plywood bellows to the Patent Mouseproof Pedals needed replacing in order to make it play, so I set about fixing it.  Luckily, the majority of the carcass was held together by gert big dome headed screws, so it was easy to pull to bits.  Once inside, I recall a great deal of head scratching, because it looked to me as if the things was built back to front.  All the air valves were on the wrong side. A quick phone call to Paul solved the problem. “That’s because it’s an American Organ, not a harmonium.  Harmoniums blow, American Organs suck!”  Not a lot of people know that. Well you learn something every day.

Well I got the thing working after a fashion and spent many a happy hour getting most of the stops to work and fixing dodgy keys. Despite not being a pianist I managed to learn a tiny bit of Bach and a passable rendition of the folk song “The Lark in the Clear Air”. However, modern central heating took its toll and over the years the innards started to fall to bits as the glue dried out and lost its stick.  Had I not has a busy career and three kids and a wife to keep me occupied I might have restored it, but I didn’t.  The time came when It had to make room for proper furniture in our living room.  I took the whole thing to bits, removed the two hundred and odd brass reeds (I still have them in a box, can’t bear to part with them) and took the rest of the crumbing mechanical  innards and the keyboard to the tip.  But that oak was just too good to throw away, so I had a brainwave.  We needed a bench seat in our conservatory so reassembling the carcass in a different order, I made this. 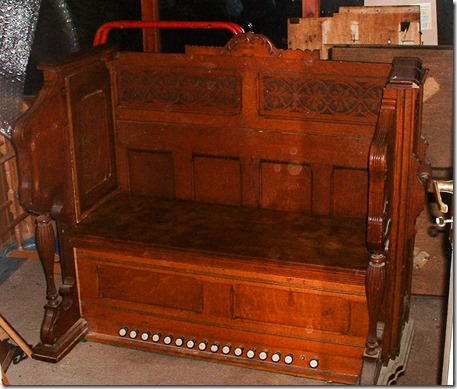 There it stood for many years, while the organ stop drawers long the bottom gradually got broken off by wayward feet, until the day came when we decided to take it to bits and install something more comfortable, but still I couldn’t bear to throw away that lovely oak and much of it stands in my shed as I write.

So why am I telling you all this?   Well I’ve found a use for a small bit of it.  On Herbie’s rear deck seats we keep a box for windlasses, stakes, mooring chains and the like.  In spite of several coats of varnish the plywood box lid has delaminated, so we need a new one.  Now do you remember a couple of posts back that picture of the lovely old sailing boat? That’s what inspired me to make a new lid out of some of the old oak.  If that boat can last a hundred years under lots of coats of varnish, then my hundred year old oak can do the same, and look good into the bargain.  So here is my new hundred year old box lid, cut to size, rubbed down and given four coats of exterior varnish – and I managed to include some of that lovely edging.

The photo makes it look bigger than it is. I purposely left a couple of small dings in it to show its age, but what a lovely old bit of wood eh?  That’s a bit of history that is.

PS while I’m doing stuff like this, our conservatory is slowly falling down.  I seem to have an issue with priorities

Love it! I'm so glad it has a new life in a different form. Long may it survive the rigours of life on Herbie!