Well here’s a thing.  Yesterdays Best Pub Grub near the canal nominations generated a healthy debate on not necessarily the healthiest of food.  This morning, spurred on by another debate on the Today programme, we decided to hold a Referendum on who should win.  The question on the paper came down to a choice between the relaxing and delicious  evening meal at the Three Pigeons or the fortifying benefits of the Traditional Breakfast at Wetherspoons before a hard day’s work. (Each five mins walk from the canal in Banbury). The referendum result was announced at 9 am today and the winner is declared as

Well that surprised the pundits I’ll bet. It surprised me actually but I’m happy with it. The result was close, the winner was just two votes in front, but as there were only two votes in total you could call it decisive.  No need for a second referendum in this case. Proper free range egg, good bacon and sausage all the usual trimmings and unlimited coffee (not included but cheap).  I should point out (because in my head I can hear Rick sticking in his oar) that other types of Breakfast are available at Wetherspoons including his favourite Eggs Benedict.

Now on to a consideration of those oddball items that make life comfortable or convenient on board. For want of a better term we call them Gadgets, or maybe gubbinses might have been a better word, but Herbie tradition requires us to stick with the former.  Now I could write about our second solar panel or other such expensive and technical items but I think the gadget competition ought to be about simpler things, so here are our three nominations.

Our woodburner (A Stovax Brunel 1A for the curious or the nerd) is a bit smaller than yer more well known Morso Squirrell, and there’s not quite enough room on top to put a decent sized kettle or saucepan.  However we eventually found this tall enamelled coffee pot with the all important flat bottom. 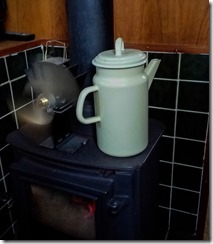 We don’t actually use it for coffee, but it’s good for keeping a stew hot or reheating a curry, or soup, and  in the evening we fill it with water to preheat the water for our hot water bottles.  And of course at the same time we’re saving the planet ( and a few pence I suppose) by not burning gas.  Of course in the summer it has a rest  from such duties.  Cheap and cheerful, it’s a nice thing to have.

2.YuYu Hot water bottle This next item may be cheerful, but it ain’t cheap.  It’s the aforementioned hot water bottle, but not just an ordinary one.  Hot water bottles are great things on a boat in winter for preheating the bed and keeping your toes warm, and they are especially good on the first night aboard when the bed needs airing. The trouble with HWB’s though is that they are only about the size of an A4 piece of paper.  Until now.  Enter the YuYu bottle.

Quite why no-one has though of this before, I don’t know.  The YuYu bottle is 80cm long and comes in a bespoke cover which if you so wished you could use to tie the bottle round your waist if you have a bad back or a dodgy tum in need of comfort.  What I love it for is placing between me and the colder cabin side when I’m in bed.  You get a much better spread of warmth because of the length.  The YuYu does have one disadvantage though.  It comes in a variety of attractive covers and the cheapest bottle plus cover set is £33.  If that seems a lot, just let me say that Kath bought me mine last Christmas as an experiment, and this year it’s top of her Christmas list. It’s a lot of dosh but it is very high quality and both bottle and cover are made of top notch stuff. Worth it. You can google them and buy direct or I think Amazon now sell them.

3. Lastly our new folding picnic table – Outwell Cody M.  I wrote about this a while back.  Again not cheap but it’s ingenious and more importantly it works really well, and is surprisingly sturdy. The big benefit I suppose is the saving in stowage space which is always at a premium on a boat.  Stupidly I deleted my photos of it so here are a couple I nicked from the manufacturer (I’m sure they won’t mind as I’m praising their product).

Here it is erected 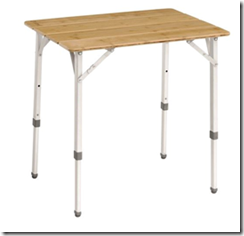 Ideal for your al fresco dining on the towpath or river bank.

and it folds down to this – great for stowing away.

Disadvantages?  The price.  The RRP is £110 which is well OTT, but thanks to luck and Kath’s bargaining skills, we got ours for half that.

So that’s our three.  A couple of them are admittedly priced in the luxury bracket, but they are really useful and well made items.

Results next time.  Then what shall we have?  How about Most Scenic Stretch of water?  I’ll have to browse through my photos.