Boating in our prime, plus a prime event.

I've lost count now of how many weeks we've been incarcerated.  The days seem to merge into one another.  I should be busy in the garden and clearing the shed but my busted ribs still start to hurt if I do anything at all strenuous..  I've also lost count of how many weeks it is since I fell off the wall, but I must be getting close to the six to eight weeks they say it takes for them to mend.  Never mind, at least we haven't picked up the lurgy yet.

About now, we'd normally be on our annual sailing weekend on the Norfolk Broads.  I don't know whether to feel sad or not, because some years they are blissful with sunshine and mild breezes and other years we get frozen and wet and terrified as the winds hurtle us helplessly this way and that.  Of course the company of old pals is always the best bit, a number of us who go have known each other for nigh on fifty years.  I think our first sailing outing together was in 1973 when we hired the famous old Wherry Albion for a week.  At least five of us from those days still meet up to sail these days.

Albion at that time still had her old heavy black tarred canvass sail which had an enormous weight.  Young and fit though we were, it still took two of us on the winch to wind her up into place.  The boat (built in 1898 if memory serves me right) had no engine, so if the wind didn't blow or was in the wrong direction, you had three options a) stay put, b) send a party ashore with a rope to haul you along like a canal horse or c) use the long 'quant' poles to shove the boat along. 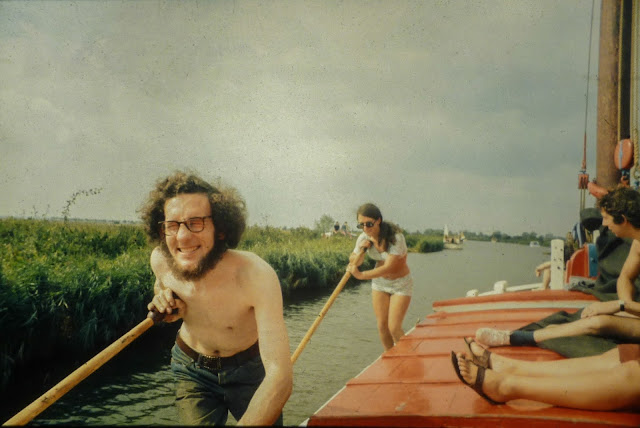 ably demonstrated by our dear departed friend Roy and behind him looking very young, and dare I say sexy, Marilyn (of Herbie blog fame) with a young but not so sexy Rick looking on.  We must have quanted for many a mile that week.

Option b) was used too when the river was too deep to quant, here's the shore party on their merry way to the bank with the rope.  Once again featuring Marilyn plus my friend Esther on the oars, and I'm sad to say I can't remember the names of the others. 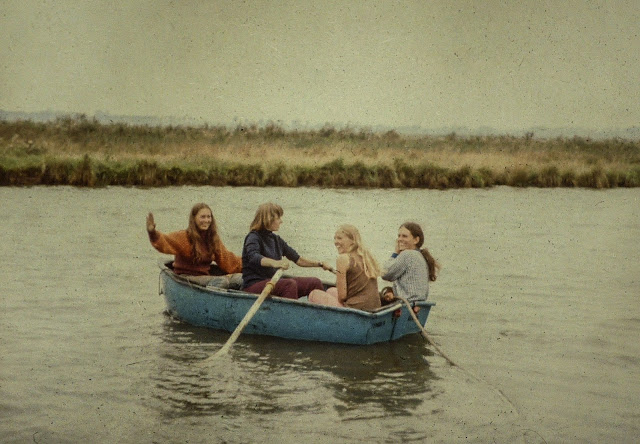 Excuse the quality of the photos, my old colour slides have deteriorated somewhat over the years. 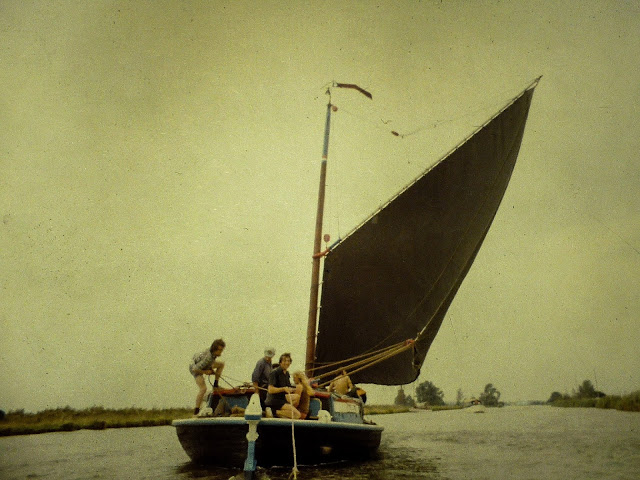 This next photo shows Rick feeding out the rope, while I sat in the tender to take pictures. Rick is clearly under the instruction of our long time friend PDS seen on the left here.  PDS still comes with us to Norfolk every year. The competition between them as to who is the better sailor thrives to this day.

Finally here we all are on Barton Broad, little knowing that that night there would be a heavy thunderstorm  with each of us lying in our bunks hoping that someone else would go outside and lower the mast.  No one did. 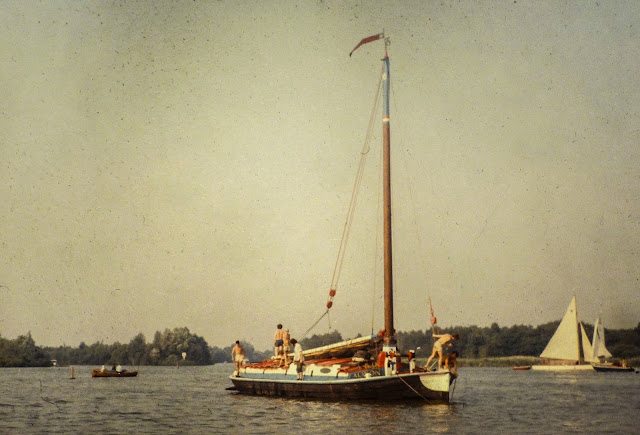 It's fair to say that lowering that huge mast is a non trivial task at the best of times let alone in the middle of the night in a thunderstorm.  Despite being hard graft it was one of the best weeks afloat I ever had, and no doubt contributed to my love of boats and waterways in a big way.

Talking of good old times   I recently came across a somewhat fuzzy on line poster showing the line up of the Windsor jazz &blues festival in 1967.

This festival later morphed into what is now the reading Festival.  I remember going down there from Bedford on my little Honda 50cc bike on the Sunday.  I think I paid £1 for a ticket and for that I saw (hold your breath)  Cream, the debut of Peter Green's Fleetood Mac, Jeff Beck with his pretty much unknown new singer Rod Stewart, John Mayall's Bluesbreakers, Pentangle and quite a few more.  I've been to many musical events over the years but I can't recall another with such riches.  I consider myself very lucky to be born when I was.