Busy doing not much

Last day out in this all too short boating break and we celebrated by doing er, not much.  We stayed put at Napton and I sat in the sun and thought about doing jobs.  It was the best day of the cruise.  Well I did do one little DiY task but I won't bore you with that.  Mainly I just thought about the other jobs that need doing, like replacing the wood on the side hatch doors.  Now I have a plan for that, but more of that another time.

After Grace left for home we needed to eat up what food she didn't eat so for a change we had a burger this week, and some sausages.  To assuage our consciences we had plenty of nice veg to add to our trusty Cobb barbecue thingy and ended up with something like this 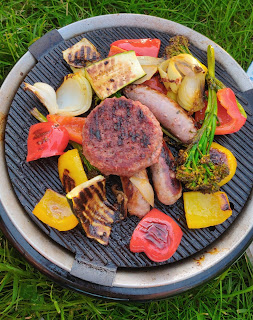 Onions, peppers,  courgettes, tenderstem broccoli and later some sparrowgrass (asparagus  to you I suppose) all nicely chargrilled. Yum.  I doubt a traditional BBQ would do them without burning, but the Cobb does.  The sausages cook through without burning too.  All on one big handful of charcoal.

As promised I strolled down to take a picture of the new mega pavilion in the Folly garden.

Coo, what a big one!  I expect landlord Mark has done his sums and reckons it will be profitable.  Since taking  over the pub some years back he hasn't put a foot wrong yet.  It should make for a long garden season at any rate.
This cruise has been to short, I'm only just getting the hang of it.  Hopefully we'll be back for more very soon.

Glad to hear you've had one, Neil! The weather is lovely for it too!